Were you looking for info on the novel of the same name, Abaddon's Gate, from the book series?

"Abaddon's Gate" is the thirteenth and final episode, and the second part of the two-hour finale of of the third season of The Expanse. Overall, it is the thirty-sixth episode. It aired on June 27, 2018.

Holden and his allies must stop Ashford and his team from destroying the Ring, and perhaps all of humanity.

Abaddon's Gate starts from Clarissa's point of view; she is observing Holden trying to talk to Miller. At first, Holden's attempts are without luck. Eventually though, from the camera view watching the prisoners, Holden's conversation appears to be with no one. After a bit of back and forth seemingly with himself, Holden goes to the camera and claims he know how to fix the situation. Holden explains that the Ring Station is considering any ship to be a threat after the skiff was blown up with a nuclear device. Holden believes, if they turn off all the fusion reactors in the system, they will be able to lower the security on the ring station, releasing anyone who has been caught over the speed limit. Holden asks Amos and Alex to get Monica Stuart to do a public announcement relaying Holden's plan to save everyone stuck in the Ring System.

With the pleas of Anna, Alex and Amos are able convince Monica to join them. With the help of Naomi, the group sets up, connecting directly into the communications network via a substation, so they cannot be stopped remotely once they start the broadcast. Anna sits down with Amos, and they discuss that after the conflict everyone needs to find a way to understand each other and explain why the choices they made matter. Anna ends saying hate is a burden one doesn't have to carry along with oneself.

With the help of some loyal Drummer security crew members, Drummer, Holden, and Naomi head to the power control of the Behemoth. They will need to be able to shut down the fusion core with the other ships.

On the bridge, in reaction to Holden's plan, Ashford sends Diogo to stop Holden, Naomi and Drummer. When the bridge crew hears Drummer and Holden explain why they should shut down the reactors, Ashford disagrees and continues with his plan of firing the communication laser. When Grigori, hero of the belt, comes forward and asks Ashford to at least try shutting down the reactor, Ashford shoots Grigori, killing him. The MCRN Captain, Chandra Lucas, responds by instructing Bobbie's team to stop Monica's group from broadcasting at the substation. Clarissa, who is on the command deck after being released from captivity because she is an electrician, gets Ashford to remove the chemical restraint around her bicep.

When Bobbie's team arrives at the substation, she finds Alex and Amos. Alex and Bobbie establish a ceasefire, putting down their weapons. While Bobbie and Alex are talking, one of the MCRN Marines, Pvt. Trepp, jumps on Alex. In response, Bobbie takes out the other MCRN Marine, Pvt. Oshi. When the remaining MCRN Marine levels his rifle preparing to shoot Alex, Amos promptly fires a single shot through the center of the private's forehead. When Bobbie declares the room clear and places her weapon on the ground, Alex finds that she was shot in the skirmish.

In an attempt to escape Diogo and two other Behemoth security agents in Goliath powered armor, Holden, Naomi and Drummer get into vacuum suits and head up the long elevator shaft running the length of the Behemoth. Holden, with some cover fire from Drummer, throws a couple grenades down the shaft disabling two of the power armored pursuers. When they find Diogo is still on their tail, Drummer stops, takes Holden's grenades and says she will take care of Diogo. Right when Drummer is expected to sacrifice herself, an elevator along the shaft hits Diogo. The elevator compartment, like a car hitting a fly, continues to race down the shaft like nothing happened, crushing Diogo. Holden and Naomi attempt to enter the command deck but when Holden sees the entrance is well-guarded, he releases his weapon and declares he is unarmed.

When the laser finally charges up, Ashford fires, but misses the ring. He immediately demands to line up for a second shot. During this time, the other ships in the system begin to shut down their fusion cores. Before Ashford fires, Clarissa throws a guard across the room, and dives quickly toward Ashford to tackle him. After momentarily knocking out Ashford, Clarissa leaps toward the power relay box containing the power modules she learned about earlier in the season. Applying the tip Ren taught her, Clarissa reverses the power buffer, causing a cascading effect, leading the power to shut down throughout the ship.

When power comes back, gates around the Slow Zone which had previously been unseen or dormant begin to open up. Any of the conflicts that were in progress aboard the ship cease. Later, the Rocinante begins to leave the Gate System with Clarissa in a med bay with Anna by her side. A recovered Bobbie straps into the gunner seat of the Rocinante beside Alex. In a monologue during Holden's vision, he has a chat with Miller on a strange beach, one of the planets now accessible through the ring network. Holden thinks that Miller wasn't always honest with his intentions. He suspects all along it was just Miller's ploy to open up the gates. Without denying the accusations, Miller asks if Holden can give him a ride. As the Rocinante is transiting through the gate, some sort of energy appears to enter Holden. 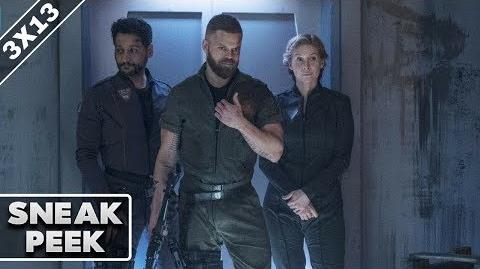