The Amun-Ra-class stealth frigate was a class of advanced warship commissioned, designed, and owned by the Protogen Corporation.

Named after the 'Hidden one' of Egyptian mythology, Amun-Ra-class stealth frigates were assembled in secret at Luna's Bush Shipyards as part of a joint conspiracy that would lead to the Eros Incident and the breakout of UN-MCR war.

There were only nine ships of this class ever built,[1] all of them destroyed by the time of the Eros incident.

A total of 9 Amun-Ra-class vessels were commissioned by Protogen, each named after a deity in Egyptian mythology. The first was the Amun-Ra itself, which served as a partially functional testbed for class's stealth systems and was later cannibalized to aid in the construction of further vessels.

Six of the eight operational stealth frigates; Horus, Amunet, Apophis, Nephthys, Hathor, and Sobek were used to attack and board the MCRN Donnager prior to the Eros Incident but were destroyed in combat with the battleship or lost when the Donnager activated its 'Condition Zero' self-destruction protocol. An eighth vessel, the Anubis, was used in attacks against the ice freighters Canterbury and Scopuli. The last vessel of the class was the Osiris, which had served as a standing escort around Thoth Station and was later destroyed by the Rocinante during the OPA (Outer Planets Alliance) attack on the station.

The Amun-Ra was a highly advanced warship. Commissioned by the Protogen corporation and assembled at Bush Shipyards on a secret contract for Protogen Corporation. Evidence implicates that the UN Undersecretary, Sadavir Errinwright, was complicit in authorizing the contract.

Currently, all ships of this class have been destroyed.

The Anubis was the ship that the OPA ship Scopuli was sent to ambush. The Anubis was at asteroid CA-2216862 and the OPA assumed it to be an unarmed research vessel. However, they were not expecting a state-of-the-art-stealth-warship which launched a breaching pod, quickly subduing the freighter and capturing the crew, including Julie Mao.

When the Canterbury, a Pur'n'Kleen ice hauler, arrived to investigate the Scopuli's distress call, the Anubis appeared seemingly from nowhere and fired several nuclear torpedoes, vaporizing the ice hauler. The explosion also caused a debris field that destroyed the abandoned Scopuli, nearly destroyed the fleeing Knight shuttle, and destabilized the entire system as accusations of either Earth or Mars being behind the attacks flying everywhere, further pushing the two powers towards war.

After this encounter, the Anubis experienced a full outbreak of the Protomolecule, which it had been transporting, and all of its crew and that of the Scopuli were killed. However, Julie survived, having been locked in a supply closet, and she escaped to find the ship derelict and that the reactor core was covered in something glowing and pulsating that was consuming the crew's bodies. Horrified, she took the Anubis-1A shuttle to Eros.

Following the MCRN Donnager, the Martian battleship heading the MCRN Jupiter fleet, recovered the Canterbury survivors, six stealth ships (Horus, Amunet, Apophis, Nephthys, Hathor, and Sobek) arrived, jammed the Donnager's communications, and moved in to attack, firing eleven torpedoes. Two torpedoes breached the Donnager's PDC defense grid, one impacting an engine nacelle (to little effect) and the other impacting the Donnager's reactor core. The Donnager had also fired back with her own missiles and destroyed one of the six ships. The combatants entered the minimum range for torpedoes, and the Donnager powered up her railguns, destroying two more ships, and a fourth with concentrated PDC fire. To the Donnager command crew's surprise, the stealth ships fired back with their own rail guns, at the time the smallest vessel in history to ever house a railgun, forcing the battered warship to power down. The stealth craft then deployed boarding pods, which breached the MCRN ship's hull and flooded it with Protogen troops. The remaining two Amun-Ra's were destroyed when the Donnager self-destructed.

The Rocinante was later dispatched to "Lionel Polanski's" last known location by Fred Johnson, finding the seemingly inactive Anubis almost perfectly concealed within an asteroid. Searching the ship, Holden's crew found it had been bound for Eros from Phoebe but never arrived, although its shuttle had. Discovering the Protomolecule and what it had done to the crew, the Rocinante's crew returned to their ship and destroyed the Anubis with a torpedo.

When Fred Johnson publicly accused the UN (United Nations) of having built the ships, supported by evidence of their components originating from Bush Orbital Shipyards, Errinwright denied this claim, insisting that while the UNN had constructed the parts, they had been stolen.

The last remaining Amun-Ra-class, Osiris, had been assigned to permanently guard a Protogen Research Station. When the OPA Guy Molinari arrived to investigate, Osiris emerged from behind the station and fired two torpedoes, igniting the Assault on Thoth Station. However, it was not expecting the Rocinante to be flying escort, which destroyed the two torpedoes and moved in to engage in CQB with PDCs. At first, the stealth ship had the upper hand, disabling one of Roci's portside thrusters, hampering her agility and forcing her to take cover behind the station. When Rocinante tried to take out the station's "dumb gun," the Osiris hit the frigate with a railgun round, doing little damage, but forcing it back. Amos Burton, however, repaired the thruster. The Rocinante swung back into the fight, dancing a tight circle around Osiris and riddling it end-to-end with PDC fire, killing the crew and knocking out vital systems. The Osiris was left adrift as the OPA boarded and assaulted the station.

As of the end of the Assault on Thoth Station, the service life of this highly lethal warship had come to an end. But in its lifetime, the Amun-Ra-class had offered a frightening glimpse into the future of space warfare.

At a length of 61.5 meters, the Amun-Ra presents an unusual frame, highly different from that of most space faring vessels with a shape like a huge black quartz crystal. This is a byproduct of the ship's stealth functionality, using angular sheets of black composite materials to absorb or reflect radar signals. These materials are supported by active cooling systems to conceal the ship's detectable heat signature, able to reduce the frigate's ambient temperature to match that of an asteroid or even that of background radiation. This functionality is of course only available when the frigate's main drive is offline, as an engine burn of any kind would alert any nearby vessels to the ship's location.

The Amun-Ra class is frightfully well armed for its size, and at the time of its commissioning, the class was the smallest vessel in history to be armed with a railgun. The ship's prototype S-24 Kopesh is internally mounted along the vessel's spine, however its railgun is significantly out-ranged when to compared to MCRN (Martian Congressional Republic Navy) and UNN (United Nations Navy) warships. The railgun is supported by 4 retractable hyper cooled PDCs for maximum heat signature concealment and uninterrupted firing time, as well as a pair of concealed Missile bays, equipped with rapid reload systems. The standard crew complement of the Amun-Ra-class includes 50 personnel; however, this is frequently expanded to 100 for missions which include troop deployments or boarding actions. During such encounters, assault teams are deployed using the frigate's 15 breaching pods laid into the ship's broadsides. These pods function by launching a small breaching charge to weaken the hull of a target ship before clamping themselves into the surface using 3 mechanical claws, establishing an access passage for troops.

The Amun-Ra-class carries a single Khonsu-class shuttlecraft, equipped with similar stealth features to the larger frigate. This shuttle is able to serve as a forward scout for the frigate capable of traveling impressively long distances from its mothership to transfer personnel or supplies. The craft is kept in a concealed compartment, nearly indistinguishable from the rest of the frigate's hull, and can be quickly deployed as an evacuation craft, in the event of an emergency.

However, this ship, although formidable, has a few weaknesses in combat: even six of these ships in close formation were unable to fully blunt a Donnager-class battleship's missile barrage, losing one of their six to torpedoes. The positioning of its PDCs, although allowing equal coverage, does not allow for complete overlapping fields of fire; during a pitched close-quarters battle the agility of a Corvette-class light frigate, combined with the fact that it can fire five of its six PDCs at a single target simultaneously, allowed the smaller ship to dance a tight circle around the Osiris and riddle it with holes without much return fire. The ship's light railgun is also significantly out ranged by all known MCRN railguns and UNN railguns, as seen when Donnager's railguns were able to fire and score a kill well before the stealth frigates could get within range. 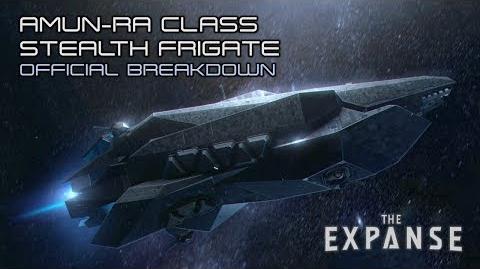 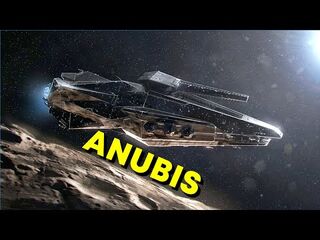 Early Development of the Anubis 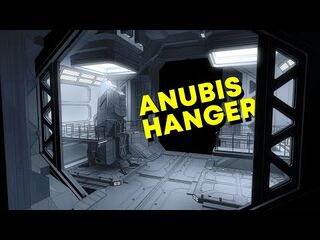