"Assured Destruction" is the third episode of the third season of The Expanse. Overall, it is the twenty-sixth episode. It aired on April 25, 2018.

Earth strategizes a costly ploy to gain advantage in the war against Mars; Anna struggles to convince Sorrento-Gillis to do the right thing; Avasarala and Bobbie seek refuge aboard the Rocinante.[1]

On the Rocinante, Avasarala is unconscious in the med bay recovering from the recent trauma in the Razorback escaping the UN ship. Draper butts heads with the crew and won't reveal why she and Avasarala were on the run. Holden interrupts the confrontation and states they are luck to be off off everyone's radar and will continue towards Io. Holden tells Draper, they will fix the Razorback's communication capabilities so they can be on their way and that's all he owes her and Avasarala.

On Earth, Gillis and Errinwright discuss if they should take preemptive strikes against the five MCRN stealth retaliatory stations that could launch nuclear destruction down upon Earth. Gillis is not convinced this is the best course of action so, giving himself more time to consider, he postpones his decision of a preemptive strike until all five bases are identified.

On the UNN Agatha King, Admiral Souther, having received orders to pick up a drop ship, receives further orders from Fleet Admiral Nguyễn that the inhabitants of the drop ship are to be considered prisoners, no one is to question them and provides co-ordinates for a rendez-vous.

On the drop ship that escaped from Guanshiyin, Cotyar and Theo, the tech, receive notice they are to be rescued by the Agatha King. Theo, who is unclear what he should say to the captors, asks Cotyar for guidance. Cotyar misdirects Theo's attention away from himself so he can strangle/break Theo’s neck, understanding Theo would be quick to tell his captors the entire story.

On Io, Jules-Pierre Mao watches the children play and sees a picture of his daughter, Julie, transformed by the protomolecule. Katoa shows Mei his glowing blue arm and shows off his ability to climb. on the Roci, while taking out Prax's staples, Burton talks about his background.

Kamal sees Nagata looking up Tycho Station on the maps of the Razorback as she is fixing its comms and realizes she is tempted to leave. When Avasarala awakes, she is unsuccessful in getting Holden to agree to send a message to the Agatha King to stop the war.

When Nguyễn arrives on the Agatha King, he tells Souther that Avasarala is a traitor and was working with Mao. He interrogates Cotyar, who is in a med bay of the ship recovering, with Souther watching. Cotyar says a UNN ship fired on the Guanshiyin, that Errinwright is the traitor and lies that Avasarala is dead. Nguyễn doesn't believe Cotyar but Souther is suspicious. At the UN, Gillis and Anna argue about his speech and whether or not to strike Mars' stealth platforms. Mao meets Mei and starts to bond with her. Alex gets a message from his wife, Talissa that she's glad he's alive but his family doesn't need him anymore.

Gillis is told that all five of Mars' stealth platforms have been found but despite Errinwright's insistence they strike, Gillis holds out for better odds of taking them all out. Avasarala shares complete details the Roci crew of Mao conspiring with Errinwright and creating protomolecule hybrids from children as a weapon. Holden reveals they defeated a hybrid and Prax explains the Io is the location of the experiment, his daughter among them. Nagata reveals she gave the Belt the protomolecule which shocks Avasarala. On Io, Katoa collapses.

With the odds of a preemptive attack on the Mars stealth platforms maxed, Gillis gives approve. All five are destroyed one launches before being blown-up. Earth's defense's shoot down all the missiles but one, which impacts Brazil, killing two million.

On Io, Mao orders Dr. Strickland to end the experiment on the children which Strickland protests.

In the galley of the Roci, Avasarala can't reach an understanding with Nagata who knows she wants to secure a protomolecule sample for Earth. The both conclude that they won't be friends. Errinwright blames the missile launch and its destruction on Gillis' earlier order to stand down, which he relays to Anna, who is disgusted.

The Agatha King picks up a distress signal[edit | edit source]

Everyone gets on the same page[edit | edit source]

Wavering in the face of consequence[edit | edit source] 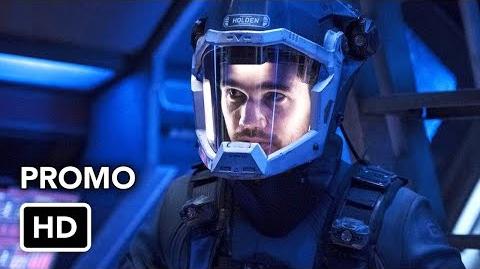 Retrieved from "https://expanse.fandom.com/wiki/Assured_Destruction?oldid=64864"
Community content is available under CC-BY-SA unless otherwise noted.