Demise of the Scopuli and Canterbury

Attack on the Donnager (TV)

Sol system, between Jupiter and Mars

The Attack on the Donnager happened after the Flagship picked up civilian survivors from the shuttle Knight, the Martian flagship Donnager came under attack from several unidentified Stealth ships.

After receiving a distress call from the shuttle Knight off the destroyed Canterbury the MCRN Donnager moved to pickup the survivors. One of the survivors James Holden then believing the MCRN had destroyed the Canterbury made a transmission blaming Mars for its destruction. When the Knight was then docked with the Donnager the survivors were taken into custody and interrogated.

At this time an unidentified ship raced towards Donnager before entering combat range and splitting into 6 stealth ships. The Donnager's comms were jammed and the six ships moved at thrust towards Donnager.

These six ships fired a volley of torpedoes at Donnager. Captain Yao ordered General Quarters and had the battleship return torpedo fire. The unidentified ships evaded and destroyed the incoming torpedoes and drew closer. Now within CQB (close quarter battle) range Donnager' railguns were activated and fired upon the hostiles. A stealth ship was hit by a railgun round destroying it followed by another.

A torpedo fired hit Donnagers' aft damaging the reactor. This forced the crew to shut it down leaving the ship in zero gravity.

Locked in their captain the crew of the Canterbury were shocked at how bad the situation appeared to be. Alex began to panic when Shed provided him with a drug to calm it. Shed threw it towards Alex in the zero G, however before Alex could grab it Shed was suddenly killed with a railgun round tore right through his head and out the other side of the room. Amos and Naomi managed to plug the holes to prevent a vaccum. To converse air Alex took a sedative and they awaited a hopeful rescue. The reactor reactivated and Shed's corpse was splattered in his formerly floating blood.

During the battle the Stealth ships entered into CQB and were able to launch breaching pods onto Donnager. On the bridge with the command crew the Canterbury survivor James Holden recognised the stealth ships as being the same as the ship that destroyed his ship and therefore Mars were not to blame. Captain Yao therefore ordered that Holden be taken to the docked MCRN Corvette Class Frigate Tachi to escape and provide this evidence to the Martian Congressional Republic.

Moving with Lopez and a Marine squad Holden moved towards the hangar bay. There was a blast near them and out of the dust several boarders appeared and engaged with the Marines. Holden used this event to run and try and get to his trapped crew. A deck down he found a wounded boarder and attempted to get information off him, however the gun Holden threaten him with was DNA incoded and could not be used. The wounded boarder tried to kill Holden, but the Marine squad arrive and shot him in the arm. Having lost one of his Marines in the previous engagement Lopez interogated the wounded boarder but was unable to obtain any information before the man died. Holden promised he would cooporate fully with the MCR if Lopez would help the rest of his crew escape. Lopez agreed and they set up a temporary air pocket at the room entrance and got into the room discovering Shed's death and getting the survivors into their vac suits.

At this moment the Marines recieved information that Captain ordered Condition zero meaning that the ship would be deliberately destroyed if boarders gained access to vital areas of the ship such as CIC. It was then vital that they escaped as soon as possible to avoid the risk of being caught in the overload of the reactor.

The Cant crew and surviving Marines made it to the hangar bay across from the Corvette-class frigate. Boarders however, had taken up positions overlooking them and the Marines took up covering fire positions. Lopez then ordered the Cant crew to run to the Tachi entrance with mag-boots turned off two people at a time on his order. First went Alex and Amos as the marines covered them. Alex was still drugged by the sedative and had to be carried along by Amos. Half way across Amos was shot in his leg, but he and Alex managed to reach the ship. Next was Naomi and Holden. They ran across when the reactor went offline again. Now on the float Holden attached a cable to Naomi's backpack and kicked her causing him to return to the floor. He activated his mag boots and pulled her down. The marines providing cover took several hits killing most of them, with Lopez surviving but having recieved torso injuries from an explosion. Lopez made it onboard and notified the survivors that the other Marines were dead. Holden helped him to the ship bridge and got Lopez seated. At this point Lopez authorised access to all ship systems to everyone on board and stated that he was not a pilot. Holden forced Alex to the pilot's chair and everyone strapped in. The Tachi then launched and activated its PDCs in the hangar firing on boarders and the hangarbay door blowing a hole for them to escape through. Lopez ordered Alex to take evasive manouvers and go at max burn.

In the bridge the closed bulkhead was being cut through by the boarders and Captain Yao knew it was only a matter of time before they would enter. It was her duty to prevent the capture of the ship under Condition Zero, and once the Tachi had escaped she and a senior office pressed the detonation panels causing the reactor to overload and completely destroy the ship. Donnager was blown into dust along with two Amun-Ra-class ships that were within close proximity.

Onboard Tachi upon realising they were not being followed Alex cut thrust and the ship was on the float. The heavy burn had caused the badly injured Lopez to die, and Amos was still wounded. They patched his leg with a cast and gave him a pain injection. At this point they discovered that the ship was recieving a tightbeam from Tycho station (which using the Nauvoo's powerful array had spotted them) offering whoever was onboard shelter at Tycho station. The crew voted amongst themselves to accept and using complex and illegal method managed to change the ship name from Tachi to Rocinante hiding its identity as a Martian Navy ship.

Holden would later claim legitimate salvage on the ship despite a later legal challenge by the Martian Congressional Republic.

When at Tycho Fred Johnson promised to return the body of Lopez to Mars, however before doing so Fred checked Lopez's armor and found a memory chip. It was heavily encoded, however they were eventually able to decript it and discovered it was an entire battle analasis including the specs of the attacking ships. He publically showed this to the system as it proved that the ships reactors were built on Luna and not in the Belt by the Outer Planets Alliance. 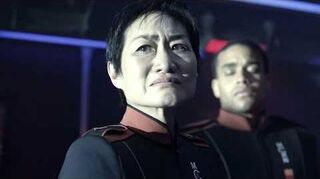 Attack on the Donnager in The Expanse
Retrieved from "https://expanse.fandom.com/wiki/Attack_on_the_Donnager_(TV)?oldid=71863"
Community content is available under CC-BY-SA unless otherwise noted.