The Blauwe Blome is a bar on Tycho Station.

The Blauwe Blome is know for two things: its Blue Meanie drinks and for being filled with Golgo game tables. It should be noted that the Tycho Station Guidebook warns potential patrons that the station allows the bar to serve only two Blue Meanie drinks to a customer, due to the suicidal mixture of ethanol, caffeine, and methylphendidate in the drink.[1]

Inside, the club is an all-out assaults on the senses. A massive dance floor dominates the central part of the club. The music is deafening and dancers are bathed in a constantly changing light show synchronized with the beat of the music. A long, chrome bar is set against one wall, where half a dozen bartenders are usually busy filling drink orders.

The golgo tables are set up in the back room of the club where it is not as noisy.

This is the favorite club of Samara Rosenberg, Camina Drummer, and of Naomi Nagata when she was on Tycho.[2]

Jim tacks down Naomi at the club after they had split up to apologize to her and begin to rebuild their relationship.[3]

After the Rocinante returned to Tycho from the Eros incident, Amos and Alex went to the bar to drink. Alex was talking with some girls when one attempted to kiss him and a Grimy Belter got jealous and started yelling at her. Subsequently he attacked Alex, resulting in Amos knocking him down.[4] 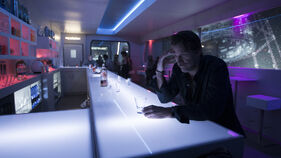 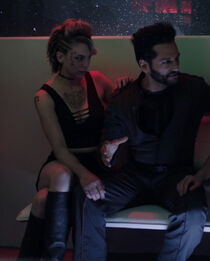 Retrieved from "https://expanse.fandom.com/wiki/Blauwe_Blome?oldid=63872"
Community content is available under CC-BY-SA unless otherwise noted.