Gunnery Sergeant Roberta "Bobbie" W. Draper is a member of the Martian Marine Corps. For the better part of her life, she was a fiercely nationalistic Martian dedicated to the Martian dream of terraforming Mars, but after discovering her nation's involvement in an inhumane project, she defected to the United Nations' government, only to discover that the U.N. was involved in the same conspiracy. Acting as a bodyguard to Chrisjen Avasarala, she helped expose the conspiracy in both governments and prevented a war between the United Nations and the Martian Congressional Republic from worsening. After surrendering to Martian Congressional Republic Navy authorities, she was cleared of charges of treason and reinstated, with commendation. Because of her contacts within all three major governments, she now acts as a liaison between the various factions and the MCR.

Bobbie was born on Mars in the 24th century. Because military service is compulsory, she underwent military training. Over time, she advanced in rank becoming one of the MMC's best soldiers.

Even before the situation between the UN and the MCR escalated to extreme levels, Bobbie believed that engaging into war against the Earthers was the only way to secure Mars' safety and continuation of the terraforming project.

She is known to have welcomed Travis into her squad, even though she knew that he originated from Earth, thus implying that she does not discriminate Earthers from Martians when it comes to loyalty.

In "Safe", Martian marine Bobbie Draper undergoes a brutal training exercise before being deployed on the Scirocco to investigate why a research station on Saturn’s moon Phoebe has gone dark.

In "Static", Bobbie struggles with the news that the Martian moon Deimos has been destroyed by Earth. Bobbie is eager to join the fight for Mars, and is frustrated when she is assigned to the Jovian moon, Ganymede.

In "Paradigm Shift", Bobbie and her Martian Marine crew are deployed on Ganymede as part of a mission to secure a food supply. She and her team are holding the line between the UN army and the Marines when something goes wrong. Suddenly, their comms are jammed and they see UN patrolmen quickly advancing upon them. The scene cuts away and when it cuts back, she’s been attacked by some thing and her entire crew is dead.

In "The Seventh Man", Bobbie is revealed to be the only member of her crew who survived the Ganymede incident and her memory of the event is hazy. With so much riding on her testimony, politically, the higher ups in the Mars Navy press her for information, but all she can remember is that United Nations troops were running from something. Bobbie’s story doesn’t mesh well with the narrative that the Martian Navy is trying to construct (ostensibly to maintain peace, but perhaps for another purpose), and they inform Bobbie that she will have to depart for Earth to give a false testimony; stating that she and her team fired on U.N. Navy troops first.

In "The Weeping Somnambulist", Bobbie arrives on Earth to offer her testimony from Ganymede. She lies, under orders from Martian Navy top brass, and says that her unit mistakenly started firing upon the UNN troops, and is deeply upset when one of her marines is thrown under the bus as the instigating force behind the battle. Avasarala senses that Bobbie is hiding something and requests more time with her. As Avasarala grills her for the truth, Bobbie lets it slip that “something” with no vacuum suit attacked them, but quickly gets back on script.

In "Cascade", Bobbie manages to escape her quarters after being kept there as prisoner. Eventually, with help from an Earther named Nico, she reaches the ocean. However, she is suddenly confronted by Avasarala, who finally has a moment alone with Bobbie and tries to get the truth about what really happened on Ganymede. Unfortunately, Bobbie is still reeling from her experience at the UN and has yet to trust the Earther politician.

In "Here There Be Dragons", fresh off of her betrayal by her own team, Bobbie is determined to uncover the truth about Ganymede. She interrogates and brutally attacks her superior, Martens, until he acquiesces: her team was the sacrificial lamb to test a new weapon on Ganymede. Bobbie escapes from her planet's embassy and seeks political asylum on Earth where she tells Avasarala everything she knows.

In "The Monster and the Rocket", Bobbie departs Earth for Jules-Pierre Mao’s ship, the Guanshiyin, serving as extra muscle for Avasarala. Aboard Jules’ luxurious ship, Avasarala and the business magnate discuss terms: in exchange for access to the protomolecule technology, Jules wants his family assets freed from UN restrictions. When Errinwright sends a message that Martian Defense Minister Pyotr Korshunov, the only other person funding the protomolecule project, has passed away, things come to a head. Avasarala is the only one alive that can expose Errinwright's role in the protomolecule conspiracy, so he orders her shuttle to return to Earth, stranding Bobbie there, along with Avasarala. Mao's men prepare to silence them forever.

In "Caliban's War", trapped on the Guanshiyin, Bobbie, Avasarala, and Cotyar try to stay alive. Cotyar is bleeding out quickly from the gunfight, but he manages to create a diversion for Bobbie to escape the room and retrieve her Martian armor. Fighting her way back to the hangar, Bobbie returns wearing her power armor and rescues Avasarala and Cotyar.

"Fight or Flight"
Escapes the Guanshiyin accompanied by Cotyar and Avasarala with the help of Theo Simibelli. Her power armor was shorted out during an invasion of the Guanshiyin's flight deck. She takes control of Julie's racing pinnace, the Razorback with Avasarala as her passenger.

"IFF"
Bobbie evades the UNN escort ship until the high-G-forces threaten Avasarala's life. At that point, to summon aid, despite the threat of imprisonment, she uses the emergency beacon in her Martian recon suit. The crew of the Rocinante respond executing daring strategies and maneuvers to disable the UNN threat. Bobbie rushes an unconscious Avasarala through the docking bridge in urgent need of medical attention.


"Reload"
Objects to looting the Kittur Chennamma but when the rescued survivors attempt to hijack the ship, she talks down Ensign Loftis.


"Immolation"
Defeats the Katoa-hybrid while distracting it so that Amos, Prax and Holden can recover the children in Prospero Station.

"Delta-V"
Bobbie has been reinstated into the Martian military and is now posted aboard the Xuesen. She and Alex share a communication where he thanks her for dropping in to visit Talissa and Melas Kamal. He explains to Bobbie that Talissa has filed for a divorce and that he's a little relieved about it but is concerned that shows he's an asshole. She assures him that it's more important that he know what he is. She relates to him that she doesn't know what she would do had Mars not reinstated her. She also tells Alex she believes he earned the right to pilot the Rocinante and she'd let him fly her around any time.

"Dandelion Sky"
Manages to have Holden respond to hails when her C.O. Paolo Mayer was unable to achieve that result. Concedes he seems to be talking to himself and crazy. Pursues him into the ring station. Opens fire when Holden doesn't remain still. Watches Mayer get killed and used to patch the hole created by his grenade.

"Fallen World"
Orders Jed Trepp to fire an RPG to discover the new speed limit before the return to the Xuesen's dropship. Refuses to accept the assumption that Holden was in control of the Ring Station and thus responsible for the massacre that resulted from the slowdown. Resists Private Trepp's recommendation to execute Holden while he's unconscious. Insists Holden will tell them what happened when he wakes up.

"Congregation"
Objects to Klaes Ashford questioning Holden. Resists surrendering her armor. Escorts Holden to the livestock livery now being used as a brig. Reminds her marines that Holden was not the only individual to come out of the slowdown event unscathed and they should all remain silent.

"Abaddon's Gate"
After learning Ashford's plan to destroy the Ring and trap everyone still in the slow zone, Captain Lucas summons Draper to the operations deck instructing her to be ready. When Anna Volovodov's transmission begins, Lucas calls Draper into action and tells her to get her armor; however, when the marines arrive at the armaments hold, they learn their armors has been taken. They equip themselves with small arms and head out to the broadcast substation only to discover that Alex and Amos are involved with Anna's broadcast. During her attempts to negotiate, Private Trepp engages in hand-to-hand with Alex and Private Oshi opens fire. The marines do not stand-down when she orders them to do so and she and Amos end up killing both. She is shot in the process and, passing out, she tells Alex that more will be sent and whatever needs to be done needs to be completed quickly.

She works for Esai Martin, helping him to sell srapped martian tech on the black market.

Before learning of Project Caliban, Bobbie was fiercely nationalistic and dedicated to her nation and planet's intentions, as well as the completion of the terraforming project. She would often express the superiority of Martian soldiers to their UN counterparts. Moreover, Bobbie often affirmed how Earther's were not grateful for their already habitable planet and took its beauty for granted. Despite this, she did not discriminate against Private Travis for originating from Earth.

After Undersecretary Avasarala revealed the Martian government's involvement in an inhumane project about the infusion of protomolecule in human DNA, Draper drastically changed her views regarding Earth, possibly also because of the planet's beauty. Eventually, she deserted the Martian military by seeking asylum on Earth, a pretext for joining Avasarala's team to uncover the true mysteries of the protomolecule and its links to the Martian Republic and Jules-Pierre Mao, effectively defecting to the UN government.

After the truth is revealed, she is reinstated into the Martian military, and while officially pardoned, her very public insubordination and defection leaves her own subordinates to question her loyalties. This ultimately leads to her being forced to shoot her own troops when they disobey her orders, believing her to be compromised.

During her time in the MMC, Draper wore the Mark III Goliath power armor[1] on missions. In addition to the hostile environments of Mars and space, the armor is durable enough to protect the wearer from small-medium arms fire. The armor's typical loadout consists of a wrist-mounted mini-gun and hand grenades and can also fire up to six homing missiles. 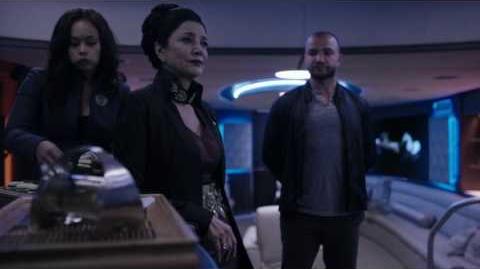 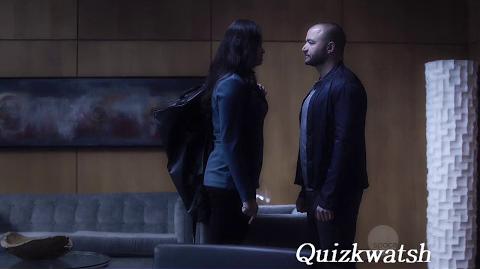 Retrieved from "https://expanse.fandom.com/wiki/Bobbie_Draper_(TV)?oldid=54888"
Community content is available under CC-BY-SA unless otherwise noted.