The Bombardment of Earth was the igniting event of the Free Navy Conflict, in which several Free Navy vessels launched an assault on humanity's homeworld, throwing significantly large asteroids at the planet, leaving all infrastructure crippled. This brief conflict resulted in the United Nations' declaration of war and evacuation of all governmental personnel to Luna.

Eventually, the entirety of Sol system allied against the authoritarian Free Navy, bringing about the first true interplanetary war.

Ever since humanity had become an interplanetary species, the Free Navy had been increasing its belligerency degree. Ultimately, under Marco Inaros and behind-the-scenes directed by W. Duarte, the organization sought the subjugation of the two human epicenters, Earth and Mars, and their extrasolar colonies. Inaros ultimately decided for the effective destruction of Earth's surface as vengeance for the two centuries in which the superpower had been continuously disregarding the Belter populace.

The attack was possible due to the theft of stealth technology by Filip Inaros in the Callisto attack the previous year, which covered the rocks, and allowed them to be undetected until a second before they hit Earth.

The first asteroid stuck Earth at Laghouat in North Africa, catching the United Nations by complete surprise. It was believed to be a natural meteor strike, but as a second asteroid struck the middle of the Atlantic, the "natural disaster" was revealed to be an attack on Earth. Dust from the impact site, caused a huge dust plume to be blown into the upper atmosphere.[2]

North Africa was in a plume of fire, while the North Atlantic went from a blue ocean into a vast circle of eerie green, spewing black and white clouds into the sky. Millions of people were dead, and millions more would die later in the next few hours as the tsunamis and floods hit the coast. Billions would go in the following weeks and months.[3]

The weapons successfully had remained undetected from radar until they entered the atmosphere a second before hitting the surface.[3] Amos Burton believed this proved that the asteroids were covered in stealth materials which had then burned off once hitting atmosphere. He was correct.

Shortly after Amos had stated this a third asteroid smashed in the East coast of North America, near Bethlehem in the Carolina Admin District.[4] While this was happening, Amos was in an underground prison visiting Clarissa Mao. Whilst in the middle of a conversation about the previous two strikes, the third hit would throw them off the ground and cause serious damage to the entire facility. As the prison was practically destroyed, they, along with several guards and other prisoners had to climb up to the surface to escape. After escaping, Amos and Clarissa were able to meet up with gang members which Amos had connections with and devised a plan to steal a ship in a wealthy area that was still on the surface.

In total, three asteroids struck Earth, each a couple of hours apart. This largely led to a complete breakdown of civil society in areas which were affected by the impact, with billions dead within days from tsunamis and earthquakes. In the long term, it completely devastated food production and energy supply. All United Nations Navy ships were recalled to defend Earth from any more asteroids that may be heading for the planet.

Earth was left completely crippled following the bombardment, despite the subsequent C.F. victory. The Martian Congressional Republic and the Outer Planets Alliance ultimately decided to put aside their political differences with the United Nations and work as an emergency unified body which was formed under the goal of defeating Marco Inaros's Free Navy. All UN government personnel who survived were evacuated to Luna.

The UNN was recalled from all across the system, forming a defensive blockade around Earth to protect it from further incoming asteroids. This led to them being unable to protect the colony ships which were now trapped in the Belt.

It was discovered that the stealth-coated asteroids were being directed by a Free Navy ship named the Azure Dragon. Due to the threat of more attacks, the United Nations Navy would not permit any of its ships to leave orbit and engage this vessel. This left only the independent contractor ship Rocinante as the sole available ship for this mission. It was felt however that there would need to be a mission commander, and so the (former) Martian Marine Bobbie Draper was selected for that role.

In order to reach the Azure Dragon without it fleeing, the Rocinante was required to make an approach via RCS thrusters without the assistance of its Epstein drive, which would have given away its position. The Rocinante was able to get in close to the Free Navy vessel and launch a boarding mission to capture it. The Azure Dragon was then escorted to Luna, where it could be inspected for intelligence.

Chrisjen Avasarala became acting Secretary-General of the United Nations due to Nancy Gao's death in the strikes.

Total deaths from the attack are unclear. Hundreds of millions died in the initial damage from earthquakes and tsunamis, while billions more died in the coming weeks due to environmental disaster, the breakdown of society, and lack of food or water. In Babylon's Ashes, 15 billion were either dead or injured, with only 5 billion being spared. 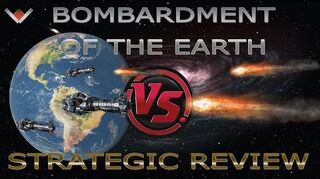