Edit
watch 01:33
Wiki Targeted (Entertainment)
Do you like this video?
Play Sound

Holden and crew are caught in the middle of a desperate battle, as mysterious warships attack and board the Donnager. As he pursues Julie Mao, Miller’s partner, Havelock, goes missing.

On Earth, Chrisjen Avasarala is trying to get a ship to the Donnager to rescue the Canterbury survivors that have been taken prisoner by the Martian Navy. She lies on the roof of her Westchester home with her grandson, gazing at the stars, worried about the future of Earth, Mars, the Belt … and perhaps the entire solar system.

At Tycho Station, we meet Fred Johnson, the head of operations on the construction of a massive ship known as the Nauvoo, which will send a group of Mormons on a 100-year voyage. The Mormon representative with him hints at rumblings that Johnson should be replaced due to his ties to the OPA, though after delivering some not-so-subtle threats, Johnson manages to keep his position. As he asks the Mormons to get off the ship so his crew can continue with calibration work, Johnson gets on his radio and demands an update on the Donnager …

On board the Donnager, Captain Yao thinks the mystery ship that's still fast approaching is coming for Naomi, whom she and Lopez believe is OPA. Captain Yao insists that Mars had nothing to do with destroying the Canterbury and tells Holden to recant his statement. Holden refuses.

The approaching ship breaks apart into several smaller vessels and fires torpedoes. Blue battle lights warn Alex, Naomi, Amos and Shed to strap in and prepare for a bumpy ride ...

Captain Yao is unfazed, confident in the defensive and offensive capabilities of the mighty Donnager. However, the ship's PDC cannons aren't very effective against the attacker's advanced weaponry. The Donnager takes a beating, forced to switch to short-range rail guns to hopefully finish the job.

The Donnager's main drive goes out, causing the interior of the ship to temporarily lose gravity. This freaks out Alex, whom Shed tries to help by offering some of his cinnamon sticks … one final act of kindness before the medic is suddenly decapitated by gunfire that punches through the ship. Hindered by the lack of gravity, Naomi, Amos and Alex still manage to plug the holes.

As the main drive kicks back in, the survivors are disturbed by the sight of Shed's blood splashing down upon his headless corpse … and by the fact that they only have a few more minutes of air left in their holding cell. Alex takes a sedative so he won't use up much oxygen, trusting Amos to carry him when the time comes to evacuate.

The Donnager is bested by the mystery vessel in CQB (Close Quarter Battle). As Holden recognizes the ship as similar to the one that destroyed the Cant and theorizes that whoever is attacking them is trying to frame Mars for everything, the Donnager prepares to be boarded by the attackers. Captain Yao orders Lopez to get Holden off the ship so he can testify to all these events.

En route to their escape shuttle, Holden and his Martian escorts are attacked by mystery soldiers, armed with advanced weaponry and faceplates that obscure their features. Several members on both sides are killed in the battle, and one of the wounded mystery soldiers dies before Lopez can get him to talk.

Lopez suspects these attackers are also responsible for what happened at Phoebe Station. After Holden inquires, Lopez explains that the Donnager was dispatched to Phoebe Station after it went silent for several weeks, where they found everyone on board incinerated and all computer cores destroyed. Somebody was covering something up … but who, and what?

Meanwhile, at Ceres Station, the coroner of Ceres identifies the corpse of Julie Mao's hot date, Nightbandit31, as Bizi Betiko, according to his electronic ID. Miller visits Bizi's apartment building, where he finds a Slingshot Club, practitioners of an illegal extreme sport in which homemade one-person crafts 'slingshot' around the gravity wells of planets and other celestial bodies. Miller is surprised to find that the soon-to-be-doomed Slingshotter, whose progress is currently being monitored on the screen, is identified as Bizi Betiko.

So if that's Bizi Betiko … who's the stiff in the morgue?

Back at the morgue, Miller repeatedly scans the body of Nightbandit31 and comes up with a different identification every time. Octavia Muss says the stiff has an ID Spoofer Mod, an implant used to hide one's true identity. Upon further investigation, Octavia discovers that the body also has an implanted memory crypt, which Miller crudely extricates. Octavia scans the device and finds government documents, claiming the stiff was a "data broker." But what data was he brokering?

As Octavia leaves the morgue, Miller once again tries to contact Havelock, who's gone missing after the rioting on Ceres. However, it would appear that Miller's partner isn't dead - the Brothel Madam finds him severely wounded but very much alive after being impaled through the chest on a spike.[1]

Lopez and Holden rescue Naomi, Amos and Alex, with Lopez demanding they all testify that Mars had nothing to do with the Canterbury's destruction. After a desperate run for the hangar bay, they manage to make it aboard the small attack ship Tachi before Captain Yao scuttles the Donnager. Lopez authorizes fully operational access to those on board before he dies. The mighty Martian warship self-destructs as the Tachi blasts off with a groggy Alex at the helm. 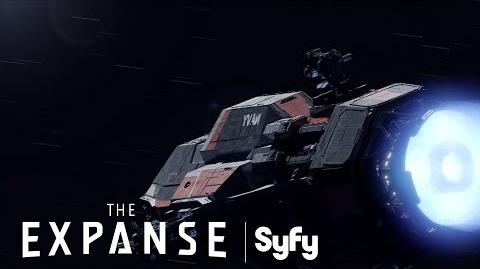 THE EXPANSE Inside The Expanse Episode 4 Syfy 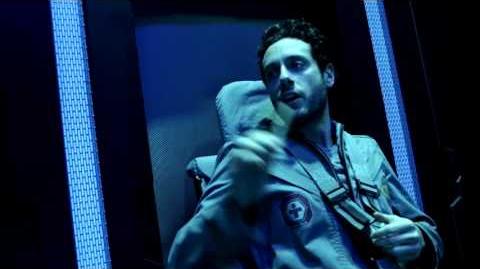 Inside The Expanse - Episode 4 THE ZONE SKY TV