President of the Transport UnionLeader of the Drummer Faction

Camina Drummer is a Belter serving as the current President of the Transport Union. Previously, she is the former Assistant Director of Tycho Station under Fred Johnson, as well as former Captain and Station Commander of the OPAS Behemoth/Medina Station. After resigning from her position, she began a journey as lead of a pirate fleet taking over the Sohiro territory and collecting a cut of all pirate activity. She commanded the Dewalt with her family accompanying her in a small fleet, before ultimately breaking up due to differences regarding the affiliation to the Free Navy. She was in command of formerly Klaes Ashford's ship Tynan and led the Drummer Faction in conjunction with the UNN and MCRN against Marco Inaros in the Free Navy Conflict.

Drummer was born and raised on Ceres, where she worked the docks for many years, and eventually became acquainted with Anderson Dawes, rising up to become a trusted and high-ranking member of his OPA faction. She was present when Dawes found Fred Johnson in total moral, emotional and financial ruin, and was the one who convinced Dawes to save Fred instead of killing him. After they helped Fred back up on his feet, and he broke out with his own ideals and OPA faction, Drummer left Dawes, whom she had grown disillusioned with, and followed Fred to Tycho Station, where she became his second-in-command.

In Season 2, she mostly operated on Tycho Station under Fred Johnson's command. She first becomes involved in the narrative by helping the Rocinante's crew deal with the raid on Thoth Station, after which she establishes a strong friendship with Naomi.

In Season 3, she helped Fred take control over the stranded Nauvoo and retrofitted it into the OPA's first war ship; the OPAS Behemoth. Subsequently, she assumed the command of the ship as its captain. During the Slow Zone incident, she was severely injured and temporarily replaced by OPAN Commander Klaes Ashford as interim captain and current XO.

In season 4, she was the OPAN Station Commander of Medina Station. Prior to that commission, she was Fred Johnson's second in command on Tycho Station as Assistant Director. There she investigated the disappearance of various Earth and Mars colony ships at the Sol ring together with Klaes Ashford.

In season 5, she joined and assumed the head role in a polyamorous family previously led by Oksana and established a pirate fleet and Belter faction.[1] During the outbreak of the Free Navy Conflict, Drummer and her faction were forced into allying with the Free Navy and the motion of deserting it led to the faction and family breaking apart.

In season 6, Drummer and her remaining faction flotilla of the Tynan and Dewalt were on the run from the Free Navy, suffering from chronic supply scarcity, involuntary family breakup with Michio and the loss of eqipment and ships.

In "Doors & Corners", Drummer serves as Fred Johnson's XO aboard the Guy Molinari in the raid of Thoth Station. She can be seen giving the boarding team a pep talk and directives, in particular, warning Miller to avoid puking and giving the former Ceres cop his helmet.

In "Static", she reviews the tremendous damage to the Rocinante with Alex and Naomi. She is awestruck. Sensing Alex' sadness, she lets him know that she's actually quite impressed with him and that she will treat the Rocinante as if it were one of Tycho's own. She invites Naomi to handball and then to a club.

In "Godspeed", Drummer relays Fred's order to launch the Nauvoo on its hastily revised mission.

In "Home", she comments to Fred Johnson when he has guidance control over the Earth's nuclear weapons that it makes him the most powerful man in the system, to which he sarcastically retorts then she should bring him a cup of coffee. Later, when the Rocinante breaks off its chase of Eros, she is the one to take those nuclear missiles on a "long ride".

In "Paradigm Shift", Holden and Naomi confront Fred Johnson with an alarm about missing nuclear missiles after Eros. Johnson is not surprised because he reveals he has them. Drummer asks Naomi for help in disabling the countermeasures.

In "The Seventh Man", Anderson Dawes attempts to charm Drummer and perhaps seduce her. It soon becomes obvious that he was attempting to learn about the secret weapon that Fred had alluded to during his OPA conclave.

In "Pyre", she takes a blast of small arms weapon fire in the gut from Staz after she insists on backing Fred Johnson when a group loyal to Anderson Dawes take the Tycho command center and try to gain control over the nuclear missiles, the same missiles which she and Fred confiscated from the UN while Tycho had guidance control. After the Rocinante crew rescue Fred and Drummer, before Alex can assist her to medical, she takes his weapon and executes Staz and Edin.

In the third season's opening, "Fight or Flight", Drummer is practicing hanging inverted low-g crunches in a stunning exercise of strength while reminding us of the injuries she sustained in her last appearance only a little past mid-season. She receives a notification from Fred informing her to meet where he shares with her the revelation of the protomolecule given to him by Naomi. Shockingly, Fred tells her that he's chosen to share the protomolecule with Anderson Dawes, a revelation that infuriates Drummer. Fred finds her drowning her rage at Tycho's Blauwe Blome bar. Despite her continued outrage, Fred has an assignment for her of utmost importance - to retrieve the Nauvoo. Not to return it to the Mormons but to refit it as an OPA battleship.

as "Reload" begins, Drummer leads a fleet of belter ships as they intercept the Nauvoo, use drones to flip the orientation of the Mormon ship's main drives before deploying an infiltration team.

She was captaining the Behemoth when the Ring Station appeared and was one of the first to enter the Slow Zone. Along with Klaes Ashford, she tried to expand the influence of the Belt over the the other factions.

During Season 4 she is still in the Slow Zone, but now the ship was renamed to Medina Station and acts as the hub between all the Ring network gates. Along with Ashford, she is trying to uncover the truth behind the mysterious attacks by the rogue OPA group led by Marco Inaros.

In "Tribes", she and her family are faced with the choice of joining the Free Navy or being doomed to certain death.

Cammina Drummer is a strong-willed, pragmatic, and no-nonsense Belter captain. Having a strong connection to her roots and her cultural identity, Drummer is a Belter through and through: She is resilient and adaptable, treats her crew with respect and equality, and is committed to the Belter way of life, which involves hard work, communal life shared with others, and not taking anything for granted. Having grown up without a stable government, but instead observing the numerous OPA factions govern themselves with their own independent rules and coexisting in a chaotic whole, Drummer values the diversity and individuality of the Belter people, and likes to preserve it, as she is against such things as uniforms or the concept of the Belt as a unified nation with only one supreme leader.

Drummer has a practical and utilitarian approach, and she is often shown suppressing her pride and making difficult choices, such as cooperating with her enemies, making heavy compromises to ensure unity among the Belt's factions or even trying to sacrifice herself on multiple occasions to protect the interests of Belters. This has caused her to occasionally clash with the more idealistic Naomi, such as their disagreement on the Belter settlers of Ilus's risky decision to live on an alien planet.

Another of Drummer's defining traits is her sense of integrity. As she tells Bertold, she never looks away or hides from her actions or their consequences, and this has earned her a reputation among her fellow Belters. When she is displeased, she speaks up, and she refuses to become involved in something that she doesn't align with, as seen in her quitting her prestigious position as captain of Medina Station over her disagreements with Fred Johnson. She is very proud, but is not above following orders if the person in charge is someone whom she trusts and respects. When that is not the case, Drummer has a hard time conforming and being ordered around and, as seen in her interactions with Marco Inaros, who forces her into compliance by threatening her loved ones, she ultimately values her freedom and her principles more than anything else.

Drummer is notorious for her short temper; She has been shown multiple times to express her anger or resentment through sarcastic jabs, threats, and even physical violence, such as when she greeted Fred Johnson with a punch in the face for giving information to the Earth that she believed the Belt should handle by itself. In extreme cases, Drummer has been known to exert swift and lethal punishment, such as when she killed her former allies Staz and Edin in retaliation for their coup against Fred, or when a skiff driver's drug selling put her crew's lives at risk, to which Drummer responded by almost spacing him. However, Drummer can also be gracious and forgiving, and capable of recognizing her own mistakes. This is evidenced in her relationship with Ashford, which started out as antagonistic, but Drummer eventually almost sacrificed herself to save Ashford, recognizing that it was the only way forward, and forgiving him for his misguided actions.

Despite her often crude and standoffish demeanor, Drummer is a deeply loyal person, who is very loving and supportive of her friends and loved ones. She readily forgives all of Ashford's transgressions, even though Ashford was originally trying to overthrow her, and the two of them develop a close and mutually trusting friendship. She freely allows Naomi to leave Medina Station in a dire moment of need, simply because she loves Naomi and didn't want to infringe on her freedom or her relationships with the crew of the Roci, and makes a lot of sacrifices to protect Naomi from harm. This softer side of Drummer's is increasingly brought forward through her relationships with her new polyamorous family, particularly with Oksana, as Drummer slowly learns to express her feelings and to allow herself to be vulnerable with others. 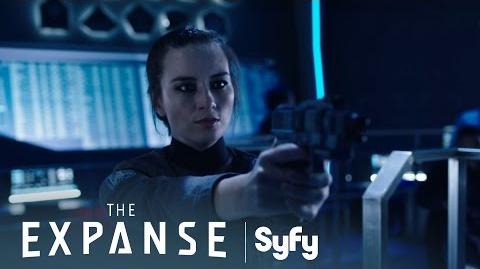 THE EXPANSE Season 2 An Ode To Drummer Syfy