The Canterbury ("Cant") was a former colony ship which was converted to function as an ice hauler traveling among the Belt and Outer Planets in service of the Pur'n'Kleen Water Company.

The Canterbury was powered by four dual Epstein drives for axial acceleration and also had a number of reaction control system thrusters to enable rotational maneuvers. The spacecraft was capable of a sustained 3g acceleration during emergency maneuvers.

The Canterbury was 1,000m (3281 feet) long and had a draft of about 250 m (820 feet). The majority of the ship's volume was taken up by its hollow cargo bay, which was open at the bow for capturing ice in space. It also had robotic arms within the cargo bay.

The ship carried number of small auxiliary craft but only carried one true shuttle, the Knight.

The vessel captured ice fragments by matching trajectories with the ice chunks, then slowly accelerating so the ice would enter the gaping maw that was her bow. The chunks would then be grabbed by large remote manipulator arms. Large pieces of ice were cut up, and smaller pieces of ice would then be stored on racks around the periphery of the open cargo bay. Ice workers in vac suits assisted with the capture operation to ensure that the ice was secured properly in the racks.

As a civilian ice hauler, the Canterbury carried no armaments.

The Canterbury had a crew of fifty five people. Among them were:

Some time before the Eros Incident, the Cant was rigged as an ice hauler. At this time, she was carrying out regular round-trip missions from her homeport on Ceres to Saturn where she collected ice from the rings and returned the ice to Ceres for melting into liquid water for life support and industrial purposes. At this time Ceres was suffering from a considerable water shortage and the Canterbury was part of the station's life-line.

The ship was in a state of disrepair and lacked essential facilities such as a med bay due to numerous reconfigurations and corner-cutting over the years of her service. Crew members were routinely injured and complained of the dangerous operating conditions aboard, and mental illness incapacitated the ship's XO.

The defenseless ship was destroyed in an ambush by the stealth corvette Anubis while investigating the distress beacon of the Scopuli. Only five crewmembers survived thanks to being aboard the shuttle Knight which was a safe distance from the reactor breach initiated by the Anubis's nuclear assault. 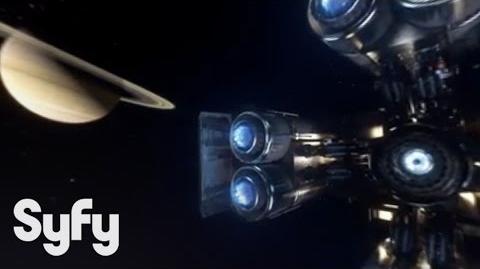 Syfy’s The Expanse- Virtual Reality Tour of the Canterbury
Jul 29, 2015 by 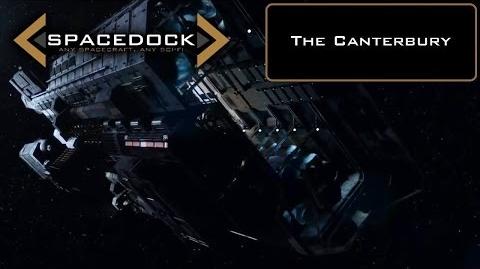 The Expanse The Canterbury - Spacedock
by 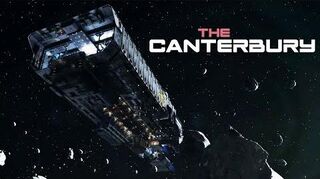