Start a Wiki
watch 01:52
The Loop (TV)
Do you like this video?
This article is a stub. You can help The Expanse Wiki by expanding it.

Retired from espionage work for the UN government

In "Rock Bottom", Avasarala happens to show up with her grandson at an aquarium where Carlos Davila is visiting. She coerces Carlos into giving her access to his corporate spy so she can surveil James Holden

In "Godspeed", Carlos Davila reports to Avasarala from the location that Fred Johnson gave her. He has discovered the battered stealth ship from the battle Rocinante and Guy Molinari conquered the Thoth Station. Being filled with bodies of former Protogen employees, soon, Cotyar and Avasarala realize that Fred Johnson has provided the smoking gun, the clue that connects Protogen and Jules-Pierre Mao to the stealth ships that were implicated in the destruction of Canterbury and Donnager. She instructs Davila to push the derelict stealth ship into the nearest UNN patrol route so that it can be discovered. 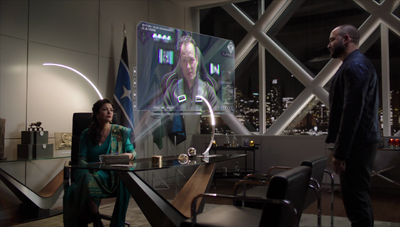 Retrieved from "https://expanse.fandom.com/wiki/Carlos_Davila_(TV)?oldid=25041"
Community content is available under CC-BY-SA unless otherwise noted.