"Cascade" is the tenth episode of the second season of The Expanse. Overall, it is the twentieth episode. It aired on March 29, 2017.

Holden leads his crew through the war-torn station on Ganymede.

On Ganymede, the Rocinante crew deal with their guilt over the shootout that led to the death of the pilot of the Somnambulist. Prax is looking very wary of being connected to them. Holden, Naomi, Amos, and Prax find out that Mei and Dr. Lawrence Strickland are not marked among the dead on Ganymede. Then, they tour the blasted agriculture dome where Prax used to work.

On Earth, the negotiations with the MCR are as tense as ever. Avasarala doesn't believe that Gunnery Sergeant Draper had been speaking from delirious hallucination when the Sergeant had mentioned the man without any vac suit. In Draper's quarters at the Martian Embassy, Captain Martens hollers at her for her testimony. She asks if she can see the ocean before she's sent back to Mars, but Martens refuses. As soon as Martens is gone, Draper begins to try to pry her room's windows open.

Errinwright is increasingly agitated as he pores over Draper's testimony and the evidence from the attack.

Holden and Naomi question relief workers about Dr. Strickland and ask about signs of the protomolecule. Naomi tells Holden this incident doesn't feel like Eros. Holden wonders if it just hasn't started yet.

As Amos and Prax investigate the damaged plant life, Prax is accosted by Basia Merton, who accuses him of cowardice. Prax tells him he's looking for Mei, and he's told to seek out someone named Roma, who might know.

Errinwright, looking stricken, goes to see Avasarala. He tells her he believes Ganymede was a test for a weapon that was made by Jules-Pierre Mao. He knows this, he says, because he's been working with Mao. He tries to justify that this was about trying to keep Earth safe, but Avasarala won't let him off the hook. He hands over all the information he has and says he thinks Ganymede was just the beginning.

Draper is finally able to get her window open, and she climbs out and tumbles her way down and out into the unsure environment of Earth.

On Ganymede, the Roci crew finds Roma, who is hoarding supplies and running his own corrupt little barter system. He's initially obstinate towards requests for help, so Amos starts beating on him. Naomi and Prax stop him from killing Roma, so, instead, Amos pulls out a gun and gives Roma a choice: help them or die.

Cotyar reports to Avasarala that Draper has escaped the Martian Embassy. She sees this as a huge opportunity to find her first, and she instructs Cotyar to see that the Martians are slowed down in their efforts to find Draper.

Draper is loose in New York, walking around shanty towns and looking for the way to the ocean. A friendly face offers to help in exchange for her bone density pills, which he can barter for medicine to help his people. This man, Nico, shows Draper how to walk like an Earther and points her towards the ocean.

While Roma searches the database for Mei, Naomi tells Holden how much she's bothered by the crew's recent turn towards violence. "Every shitty thing we do makes the next one that much easier," she declares.

Meanwhile, Prax inspects the plant life, which is dying out because of improper watering. He tells Amos that once the plants go, the whole ecosystem will go. Amos says Ganymede is too important to the system's food supply. Prax says Ganymede is already dead.

While all this is going on, Alex is having fun on the Roci, singing along to country music, performing acrobatic flips, and drinking zero-gravity beer. Suddenly, an MCRN announcement states that Ganymede and its surrounding area are declared a no-fly zone.

Roma finds video of Strickland and Mei walking towards an old part of the station where there are no cameras.

Draper makes it to the ocean and sits at the water's edge. There, she's approached by Avasarala and Cotyar. The UN Deputy Undersecretary shows Draper a photo of the protomolecule creature who rushed her on Ganymede, part of the evidence Errinwright gave her. She tells Draper it was part of a Martian test of a new weapon. Draper doesn't believe her, at first. Avasarala says they can't afford to be enemies, but Cotyar pulls her away as Martian officials are approaching.

Alex has a drunken solo acrobatic western ballad aboard Rocinante

MCRN Dispatcher : This is an MCRN Priority Alert to all vessels in the Jupiter AO. A no-fly zone is now in effect around Ganymede Station until further notice. Any unauthorized ship entering or leaving the zone will be fired upon without warning. This is an MCRN Priority Alert
Roma [36:34]: Ah! Good news, kopeng. I find the little girl and the man. They be moving way away from the battle and where the mirrors fall. Those part of the station still be okay. So, if they there, maybe they still be okay, too.
Holden [36:55]: That's as far as you can go?
Roma [36:56]: Yeah. Swear. That's oldest part of the station. No camera after that but, if you want to find her, that's where you gotta go.
Naomi [37:05]: What's down there?
Roma [37:07]: How do I know?
Avasarala : Is it everything you thought it would be? I can't remember the last time I went down to the water.
Bobbie : You take it for granted.
Avasarala : You're right about that. Your people are on their way. So we have to be quick.
Bobbie : Uh, quick about what?
Avasarala : We never finished our conversation.
Bobbie : It didn't feel like a conversation to me.
Avasarala : The thing you saw on Ganymede? It was real. Here. This is what attacked you and your team, isn't it? A new type of weapon. It was being tested on Ganymede.
Bobbie : Tested?
Avasarala : By your own government.
Bobbie : Fuck you, ma'am.
Avasarala : Sergeant, I wish to God it was my government. Then I would have some control over the situation. But right now, all I have is you.
Bobbie : So you're telling me that me and my team, we were sacrificial lambs.
Avasarala : And your friend Travis
Bobbie : I don't believe it.
Avasarala : And I don't believe a goddamn thing you were told to say in that room. I need to know who is doing this and why. I need your help.
Bobbie : This has to be a mind game. You are the enemy.
Avasarala : We cannot afford to be enemies anymore.
Cotyar : We need to go now.

Bobbie Searches for the Ocean 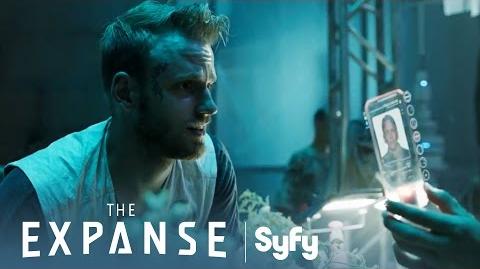 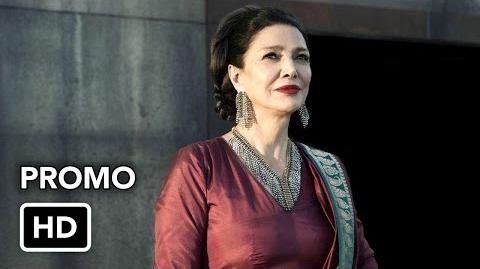 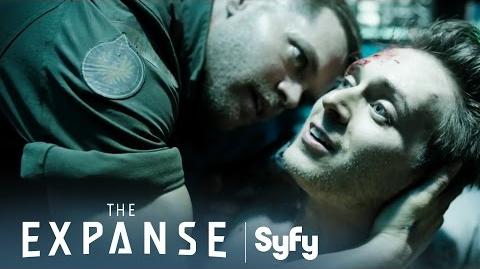 THE EXPANSE Inside the Expanse Season 2, Episode 10 Syfy 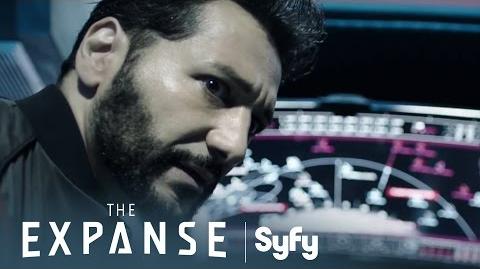 THE EXPANSE Season 2, Episode 10 'So Lonesome I Could Cry' Syfy 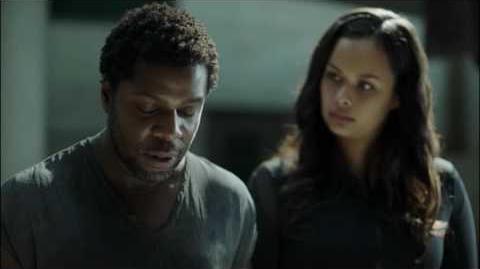 Don't Believe Everything You See in the Brochures