"Congregation" is the twelfth episode and the first part of the two-hour finale of the third season of The Expanse. Overall, it is the thirty-fifth episode. It aired on June 27, 2018.

As survivors arrive to the Behemoth, two factions form over how to handle a life-or-death threat; Holden grapples with what he's seen and the choices he must make.

Congregation begins on the Rocinante where Clarissa has been restrained in the medical bay. Clarissa tries to activate her endocrine enhancement implant, but is prevented from doing this because she is receiving a heavy dose of blockers. Anna slaps Clarissa for insulting Tilly, while Amos suggests he knows her type and explains it would be better just to end her life. Meanwhile, Naomi is able to get the receiving end of the communications array to work. The Rocinante receives word from the Behemoth's captain that they have spin gravity and are taking the injured.

Holden, who has been a prisoner of the MCRN, is questioned by Captain Chandra Lucas. Holden repeats that he told the interrogators everything he knew. The MCRN captain leaves and Ashford introduces himself to Holden. Holden breaks down the story about what happened on the Ring Station. He explains to Ashford that he witnessed a vast population of strange and brilliant minds whose civilization collapsed as it had been invaded. The protomolecule creators cauterized entire systems to prevent the invasion from spreading. Holden informs Ashford the protomolecule is not a weapon but a creation designed to build roads, treating the humans on Eros as one would treat an anthill being paved over by a road. Ashford, dubious, leaves the MCRN Xuesen's dropship and declares Holden is crazy since he claims to see the ghost of Miller.

As Ashford joins Captain Lucas and Bobbie's team on the Behemoth dock, he hears Bobbie's protest, discusses with her Holden's mental state and his potential cooperation. Concluding that Holden is unlikely to help, Ashford then takes Holden into custody and orders the marines to relinquish their armaments if they wish to stay. When Ashford starts to make plans to explode a nuclear device within the slow zone, the MCRN captain suggests to Bobbie that she should be ready to take control of the situation if things start to get out of hand.

When the Rocinante crew enters the Behemoth docks, Amos surrenders his gun to security led by Diogo with great reluctance, while Naomi is detained and taken to Ashford. When Naomi is presented before Ashford, she demands to see Holden but Ashford convinces her to help get the power grid up back up first. She tells him she will formulate a plan and organize teams to solve the Behemoth's electrical problems but will then see her friends. Naomi eventually gets enough time to go see Drummer, who has lost any sensation in her lower body. Her spine was crushed by the farming equipment during the slowdown event. Drummer, who has been working on a mech for herself, is helped by Naomi. Once the mech is working, Drummer is able to walk around.

Since his discussion with Captain Lucas and Ashford, Holden has been confined in a horse stall under lock and guard. He watches Clarissa arrive and, unaware of her identity or her recent actions, he asks her why she's being imprisoned. Clarissa responds with a laugh. Afterward, with the help of Drummer, Naomi is led to Holden. Together once more, they catch up then discuss Holden's visions of Miller. Holden thinks Miller might know how to get out of the situation, but Holden hasn't had much time to himself.

While in voice conference with Ashford and UN Commander Kunis, the UN Science officer, Kolvoord, suggests to the OPA leader that the Behemoth send out a skiff and explode a nuclear bomb in order to better understand the forces in the Slow Zone. Commander Kunis considers the plan too risky, but Ashford accepts the plan as a necessary attempt at seeking greater knowledge about the forces at hand. When they explode the nuclear bomb on the skiff, the Ring Station reacts with a greater output of energy. In the last scene, Ashford's next action plan forms. With the most powerful communication laser ever built, Ashford's plan is to slice the gate, destroying it, which would mean trapping and effectively dooming everyone inside the Slow Zone, including themselves. 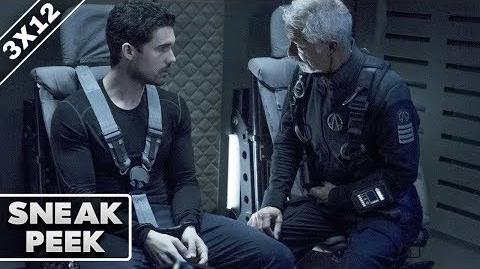