The Corvette-class[3] is a light frigate operated by the Martian Congressional Republic Navy (MCRN). This class has multiple roles, including a light-missile platform, boarding party insertion, missile defense, customs enforcement, law enforcement, reconnaissance, surveillance, and anti-capital ship engagements when deployed in numbers. This ship-class is amongst the smallest naval ships of the MCRN, second to the Morrigan-class patrol destroyer.

The most widely known ship of this class was originally called the MCRN Tachi and was carried in the main hangar bay of the MCRN Donnager. Later, after surviving the attack on the Donnager, this same ship was renamed Rocinante by her new captain, James Holden.

The Corvette-class was in service with the MCRN during the UN-MCR Cold War. This ship-class was often docked onboard Donnager-class battleships and during Operation Silent Wall two ships of the class were removed from the Donnager so as to fit four Morrigan-class patrol destroyers in their place.

When the Donnager was attacked by stealth ships, the crew evacuated several civilians to the docked Corvette-class the Tachi. None of the Donnager's crew survived so the civilian survivors claimed legitimate salvage and renamed the ship to the Rocinante. This ship was heavily involved with numerous events across known space over the next few decades.

Before the Free Navy Conflict, large numbers of Corvette-class ships were officially decommissioned. These ships were actually stolen by forces under the disloyal Admiral Winston Duarte and given to a radical Belter faction, the Free Navy.

These ships were used in numerous engagements by the Free Navy during the war until the majority were destroyed. At least one ship of Michio Pa's pirate faction the Panshin survived the war although it had received heavy damage to its outer hull at the Battle of Pallas Station.

They are also perfect for wolf-pack style attacks, where they were deployed in small groups as fast-attack or for anti-capital ship engagements either with ships of their own class or with Morrigan-class patrol destroyers.

Modernized variants of the class were still in service during the Laconia-Sol Conflict in which at least one ship was engaged at the Tempest Jovian battle.

The Rocinante was still in service at this time working contracts for the Transport Union. During the Laconian emergence at Medina Station the ship was surrendered to and impounded by the Laconian Empire. Later the ship would be retaken by its crew and flown into the Freehold Ring. 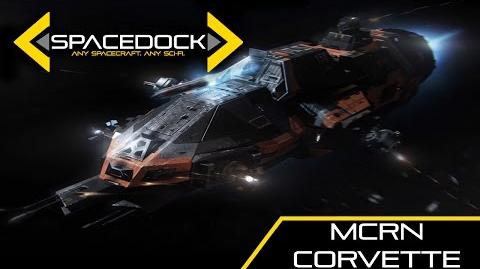 How Big Are The Ships of The Expanse?
Scale

Retrieved from "https://expanse.fandom.com/wiki/Corvette-class?oldid=74121"
Community content is available under CC-BY-SA unless otherwise noted.