The Expanse Wiki
Register
Don't have an account?
Sign In
Advertisement
in: Episodes, Articles in need of citation, Season 1

Edit
watch 02:07
Spider-Man: No Way Home Trailer Dropped - The Loop
Do you like this video?
Play Sound

Critical Mass is the ninth episode in the first season of The Expanse. It premiered on February 2, 2016 on Syfy as part one of the show's two-hour season finale.

A flashback to Julie's origin story reveals her trajectory. James Holden and Miller finally meet and team up to get to the bottom of the strange emergency situation happening on Eros. As the true horror of the events on Eros is revealed, an ailing Holden and Miller must overcome incredible odds if they hope to live to fight another day.

The episode begins with a flashback to about seven weeks prior to Miller coming up with his conspiracy theory involving the Anubis and the Scopuli. Near Asteroid CA-2216862, the Scopuli waits to intercept the Anubis. Julie Mao is on board the Scopuli, and tells her OPA associates Wan and Darren that her father's weapon is on the Anubis, and that they need to seize it to ensure it won't be used against the Belters. The OPA trio is surprised to find that the Anubis is not a simple science vessel but a stealth ship, one that easily overtakes the Scopuli. Wan and Darren are killed by the "scientists" on board, whilst Julie is thrown into a padded room to be dealt with later. The Anubis then destroys the Canterbury, after which Julie escapes from her cell only to find a completely abandoned ship. She makes her way to Engineering, coming into contact with some sort of blue glowing substance, and screams in terror at what she sees in the reactor. Julie leaves the Anubis on Charted Belt Asteroid BA-834024112, takes the Anubis 1A shuttle to Eros Station and checks into the Blue Falcon Hotel under the name 'Lionel Polanski.' Her calls to Anderson Dawes go unanswered … and her body undergoes a grotesque and painful transformation, as whatever she came into contact with on the Anubis is slowly killing her.

In the present, a barely recognizable Julie crawls into the shower stall, succumbing to the last phase of her condition just as Miller, Holden, Naomi, Amos and Alex bust through the door. A heartbroken Miller and the rest of the gang make their way back to the hotel lobby, where Sematimba meets them amongst the wreckage of the shoot-out. Sematimba tells them to get out and lay low while he tries to clean up the mess, though he's soon outranked when a sinister-looking fellow named Antony Dresden and his goons arrive, claiming they're looking for Julie Mao.

In Julie's room, Dresden takes samples from Julie's body, claiming that whatever happened to her isn't airborne … "but if it's wet, don't touch it … unless you want something incredible to happen." Dresden says there's enough gunk in Julie's body for whatever he has planned and commands his associate Rutger to tell the crew to "prepare the injections." Dresden contacts Julie's father, Jules-Pierre Mao, breaking the news about his daughter's death but assuring him that he has a viable sample of what he calls the "protomolecule" and that the injections are being prepared. A map of Eros Station labeled "Protomolecule Evolution: Phase 2" is on display, looking a lot like the blueprint for a terrorist attack. The heartbroken Mr. Mao tells Dresden to proceed as planned.

On the streets of Eros, Holden and the gang plan to get to the Rocinante as quickly as possible, though a sudden radiation breach causes all of the ships in the station to go on lockdown. Miller theorizes that this incident was no accident and scurries off to investigate, followed by Holden, who tells Naomi to take off without him if he's not back at the Rocinante in three hours. The people of Eros are starting to receive injections from CPM cops, allegedly an Iodine supplement as protection from the radiation. Meanwhile, Miller is hot on the trail of Dresden, whom he recognizes from the recording from Phoebe Station. Blaming Dresden for Julie's death, Miller tries to gun him down in the street, though he's stopped by Holden. Miller attacks Holden as Dresden and his goons board Shuttle 6H to Hotebisu Station.

Miller and Holden are soon accosted by the CPM cops that were escorting Dresden, who tell them to get to the shelter. Miller shoots one of them and interrogates the other: Mikey Ko, one of the many members of the Loca Greiga gang that suddenly disappeared from Ceres after being offered jobs by the CPM. In fact, CPM hired all the Ceres crews, mostly to set up cameras and science gear all over Eros. Eros Station is quickly becoming a nightmare as transit pods are closed, comms have gone dark and shelters are full. As a riot breaks out, Miller and Holden use a wounded Mikey Ko as a way to gain access to a shelter, where they find dozens of Eros citizens writhing in pain on the floor. Just then, the room is hit with a megadose of hard radiation. Miller and Holden don't get out in time, and now only have a couple of hours to live.

Meanwhile, on Anchorage Island in the Yukon Archipelago, Chrisjen Avasarala visits Franklin DeGraaf's widowed husband, Craig. Craig will never forgive Chrisjen for betraying Frank, though he allows her some time alone in Frank's study in order to say goodbye. Chrisjen finds three sharpened pencils in Frank's desk, which are actually data drives. On one of them she finds the plans for an Advanced Fusion Prototype, which looks a lot like the reactor on board the Anubis.

Just then, on Tycho Station, Fred Johnson sends a broadcast revealing the information found on the data cube he took from Lopez's uniform. It gives a detailed analysis of the attack against the Donnager, revealing that the attackers were advanced stealth fighters, built at the Bush Naval Shipyards on Earth. 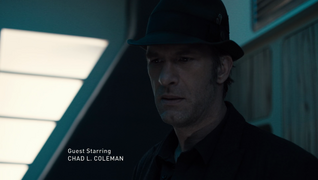 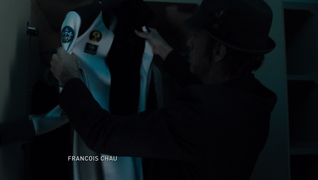 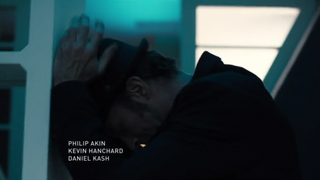 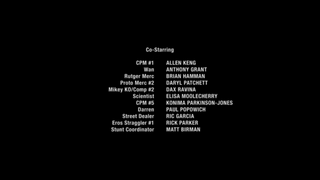 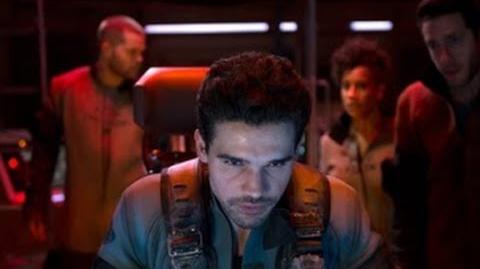 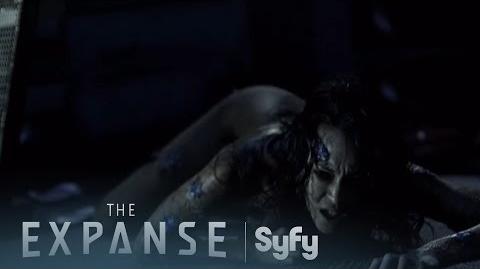 THE EXPANSE Inside The Expanse Episode 9 Syfy 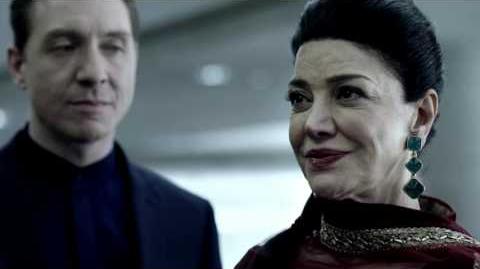 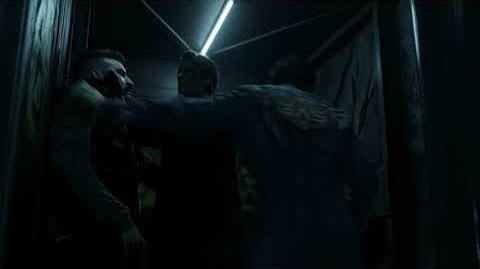