As the primary mainstay battleship classification in the MCRN, the Donnager-class serves multiple roles throughout the Sol System. At the time of the UN-MCR War, eight Donnager-class vessels existed in the Solar System, serving in a variety of roles including fleet command and coordination, battleship, force projection, and carrier of gunships and infantry.

The Donnager-class is capable of hosting a crew complement of 2086 personnel, including squads of Martian Marine Corps and their elite Force Recon units, equipped with Goliath Powered Armor. Thanks to the ship's interior hangar bay, located near the aft of the huge vessel, the Donnager can host its own escort ships in six interior ship berths. Each berth can hold one Corvette-class frigate or two Morrigan-class destroyers.[5] The battleship additionally hosts a number of Chariot-type Dropships, repair skiffs and - depending on deployment - executive shuttlecraft.

The most notable elements of the Donnager's weapons complement are its two dorsal VX-12 "Foehammer" Turreted Ultra-Heavy Railguns. At the time of the class' construction, these weapons were amongst the highest-spec railguns in the Solar System and only matched by orbital weapons systems. Thanks to the foresight of MCRN engineers the Donnager hosts a total of four railgun mounts on its hull, capable of doubling the ship's railgun complement should such technological advancements allowing such an upgrade become available.

The Donnager's other main weapons are it's six fore and eight aft rapid-reload missile launchers, capable of attacking vessels in front of and behind the vessel. These launchers are linked to shared magazines of high-explosive (HE), plasma, flechette, and nuclear warheads. For defense, the Donnager employs fifty-nine Nariman Dynamics 40mm PDCs, linked to the K-19 "Banisher" High-Accuracy Point Defence Targeting Computer, the most advanced target tracking system employed by the MCRN. Aside from its primary armaments, the Donnager-class serves as a capable command vessel in combat, with its ranging lasers and tactical systems to help guide and coordinate the efforts of fleet elements against hostile ships. In the event that a Donnager is boarded by hostiles, Donnagers are equipped with a biometrically-activated to self-destruct mechanism that ensures the ship cannot fall into enemy hands.[3]

Following the destruction of the Canterbury by unknown actors, the MCRN Donnager would be assigned to investigate the hauler's destruction and pick up several survivors before itself being fired upon by the same class of Stealth ship that had destroyed the Canterbury. The ensuing battle would see the Donnager destroy several vessels before self-destructing. This battle would mark the first instance of a Donnager being lost in combat.

During the Free Navy Conflict, the Donnagers would be used to fight against the forces of the Free Navy. Following the Bombardment of Earth and the assassination attempt on the Martian prime minister, at least one Donnager - the Barkeith - would be stolen in a military coup lead by Admiral Winston Duarte, but it was destroyed with all hands by a Ring Anomaly before reaching his destination. During the Underground-Laconia Conflict, three moth-balled Donnager-class ships were taken apart and later rebuilt in secret by the Underground. All three ships participated in the Siege of Laconia.

The Donnager was conceptualized as the primary focus of the MCRN's fleet modernization program, with a look towards design future-proofing for years to come. To this end, the Donnager was developed in tandem with the Morrigan-class destroyer and Corvette-class frigate, with the Donnager's internal storage bays capable of holding up to two frigates or four destroyers, allowing the Donnager to project force and obscure true fleet composition to enemy eyes. This program would produce eight Donnager-class vessels, whose production would use up a considerable portion of the Martian defense budget. All eight ships of the class were laid down and constructed at the MCRN Callisto shipyards.

During Operation Silent Wall, the lead ship of the class, under the leadership of Captain Theresa Yao, undertook a systematic campaign of pirate suppression in the Asteroid Belt, during which time the ship's many brigs would see use in transporting criminals back to Mars for sentencing. During the UN-MCR Cold War, eight ships of the class would be active in the system, with the Donnager serving as the MCRN flagship and lead element of the MCRN Jupiter Fleet alongside the Schiaparelli, Hotspur, and Firebrand. The MCRN Saturn fleet would be led by the MCRN Icaria Planum. All other Donnagers - the Harman Dae-Jung, Bellaire, and Barkeith - were assigned to the MCRN Home fleet under the command of the latter vessel.

Following the destruction of the Canterbury by unknown actors, the MCRN Donnager would be assigned to investigate the hauler's destruction and pick up several survivors before itself being fired upon by the same class of stealth ship that had destroyed the Canterbury. The ensuing battle would see the Donnager destroy several vessels before self-destructing. This battle would mark the first instance of a Donnager being lost in combat. Following the Donnager's destruction, the Icaria Planum would take its place as the flagship of the MCRN.

During the UN-MCR War, the Donnager class would see its first real action against the United Nations Navy in a hostile context was during the Ganymede Incident where the MCRN Hotspur was station during the engagement. 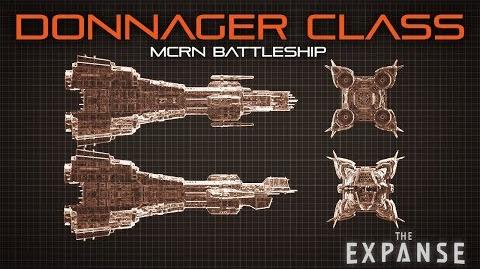 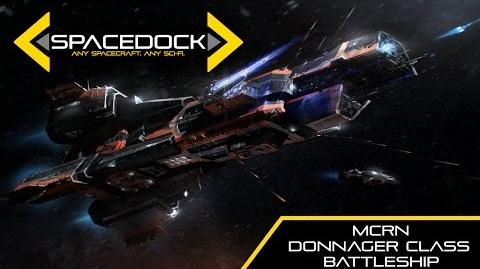 Retrieved from "https://expanse.fandom.com/wiki/Donnager-class?oldid=70159"
Community content is available under CC-BY-SA unless otherwise noted.