The Expanse Wiki
Register
Don't have an account?
Sign In
Advertisement
in: Asteroids, Locations, Destroyed astronomical bodies,
and 3 more

View source
watch 01:32
She-Hulk Trailer Dropped - The Loop
Do you like this video?
Play Sound

Not to be confused with the trans-Neptunian dwarf planet, Eris.

UN MCR Protectorate
Eros (designation 433 Eros) is a large, S-type, near-Earth asteroid approximately 34.4×11.2×11.2 kilometers (21.4×7.0×7.0 mi) in size. It is the second-largest near-Earth asteroid. It's a part of the Asteroid Belt, but it's called a "Mars-Crosser" because its orbit crosses the orbit of Mars. It is the first known asteroid to come within the orbit of Mars, having often been compared to the shape of a lumpy potato.

Eros is the site of "Eros Station", a space station that was one of the first sites of human colonization, and which by the time of Leviathan Wakes supports a population of one and a half million humans (a little more than Ceres Station had visitors at any given time).

Roughly the shape of a potato, it had been much more difficult to spin up then Ceres, and its surface velocity was considerably higher than Ceres' for the same internal g. The internal caverns of Eros had been the birthplace of the Belt. From raw ore to smelting furnace to annealing platform and then into the spines of water haulers and gas harvesters and prospecting ships. Eros had been a port of call in the first generation of humanity’s expansion. From there, the Sun itself was only a bright star among billions.

The economics of the Belt had then moved on. Ceres Station had spun up with newer docks, more industrial backing, more people. The commerce of shipping moved to Ceres, while Eros remained a center of ship manufacture and repair. On Ceres, a longer time in dock meant lost money, and the berth fee structure reflected that. On Eros, a ship might wait for weeks or months without impeding the flow of traffic. If a crew wanted a place to relax, to stretch, to get away from one another for a while, Eros was the port of call. And with the lower docking fees, Eros Station found other ways to soak money from its visitors: From its casinos, to brothels, and shooting galleries.

Its big docks were in five main clusters around the station. The old shipyards protruded from the asteroid, great spiderwebs of steel and carbon mesh studded with warning lights and sensor arrays to wave off any ships that might come in too tight.

Eros station security was handled by the private security firm Protogen until they pulled out and were replaced with Carne Por la Machina. However, this new firm was a puppet organization created by Protogen to initiate the large-scale protomolecule-experiment known as the "Eros incident".

After the Eros incident, Eros crash-landed on Venus, where no human ships could land due to the acidic and autoclave-hot atmosphere of Venus. 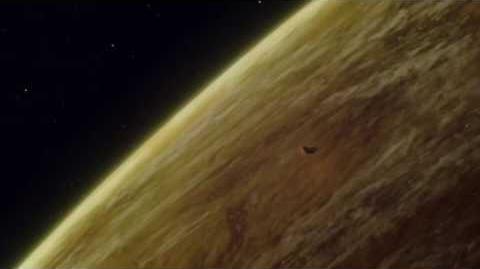