Although the formal research project was abruptly cancelled when the Outer Planets Alliance boarded the Protogen research facility on Thoth Station and Josephus Miller killed Antony Dresden, it was far too late to affect the outbreak itself. The live feeds were then unlocked and it could be observed. Miller noted that the Protomolecule was making noise that reminded him of mentally ill children singing to themselves, eventually saying coherent words.

The Outer Planets Alliance (Fred Johnson's faction) stole the Nauvoo which was under construction at Tycho Station and sent it towards Eros. The Guy Molinari traveled to Eros with a team of Belters including Josephus Miller to plant nuclear weapons on the stations surface to prevent anyone from entering and risk spreading the infection. Whilst this was going on the Rocinante discovered a ship the Marasmus near to the station surface. The Marasmus crew recognised the Rocinante as a Martian warship and obeyed the James Holdens orders. They were permitted to leave the area when it was believed that they had not entered Eros, however on the station surface Josephus Miller discovered the body of a Marasmus crewmember infected by Protomolecule. Knowing they had entered the station and possibly have become infected James Holden ordered the Marasmus to stop, however its crew refused and tried to get around to the other side of the station to prevent Rocinante from jamming its transmissions. Knowing they could not allow this to happen the Rocinante fired a torpedo destroying the Marasmus. The debris hit the surface of station where Miller and Diogo Harari were planting nuclear bombs. They took cover to avoid getting hit however one of the bombs was damaged and had to be manually deactivated every minute to prevent detonation. Miller decided to stay with the weapon so that Diogo could escape and return home.

At this point Nauvoo was closing in on Eros and was about to ram into the station when suddenly Eros moved its position avoiding the ship. Eros proceeded to speed up and move sunwards towards the inner system.

The Protomolecule life-form aboard Eros Station had achieved sentience and control over the station's spin reactors, utilizing them by unknown means to maneuver the station in space, escaping destruction. Eros traveled towards Earth, and although this was first suspected to be a malevolent action finishing the two billion year old objective of unleashing the protomolecule on Earth with Phoebe, Miller discovered that the infected body and mind of Julie Mao was at the center of the life-form, attempting to go back to her home planet.

Miller made contact with Julie and convinced her to crash-land on Venus, saving the Earth.[1]

Having crashed into Venus the Protomolecule proceeded to use the planet's resources to develop itself until it eventually rose off the planet and moved out past Uranus and formed the Sol Ring. 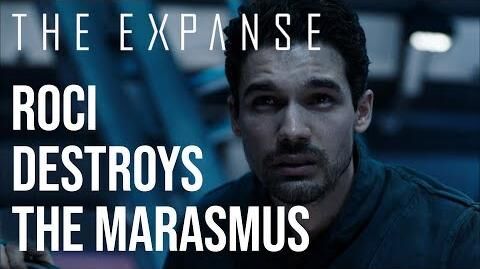 The Expanse - The Roci Destroys The Marasmus HD

Retrieved from "https://expanse.fandom.com/wiki/Eros_incident_(TV)?oldid=71680"
Community content is available under CC-BY-SA unless otherwise noted.