"Fight or Flight" is the first episode of the third season of The Expanse. Overall, it is the twenty-forth episode. It aired on April 11, 2018.

The Rocinante crew deals with the fallout over Naomi’s betrayal while caught in the middle of the war between Earth and Mars. Avasarala and Bobbie hatch an escape plan.

The episode begins in the UN Building, dealing the political fallout from the shooting war above Ganymede. Sadavir Errinwright pressures Sec-Gen Gillis to formally declare war on Mars. After great hesitation and a question about the whereabouts of Chrisjen Avasarala, Sec-Gen Gillis moves forward with a formal declaration of war.

On the Rocinante, all crew members are cleaning up after the protomolecule hybrid's recent time on the ship, attempting to clear all the protomolecule residue on the ship. The whole crew is patching up in different parts of the ship. Alex and Amos discuss the fall out of Naomi's decision to give Fred Johnson the protomolecule sample, that she said she had launched into the Sun. Amos, says "Naomi isn't the person he thought she was." Holden, upset by the whole situation, unloads his frustration onto the coffee machine in the Rocinante galley. Holden then sits down with Prax and discusses his issues with "tilting at windmills". It is shown that a mysterious mass of protomolecule goo remains undetected beneath some piping near the reactor where Amos and Alex were cleaning/repairing.

On the Guanshiyin, Bobbie leaves to recover the tech she punched earlier while Avasarala and an injured Cotyar remains hooked up to a medical unit. With the help of the tech named Theo, the group of Avasarala, Bobbie and Cotyar move to the flight deck. Bobbie is then ambushed with an electrical surge that disrupts and knocks out her power armor for the time, but Cotyar quickly shoots the two crewman on the deck. Realizing that most of the ship controls have been overridden by Jules-Pierre Mao's security system after the nearby UN escort ship has fired missiles at the Guanshiyin, the plan is get Bobbie and Avasarala onto the racing pinnace Razorback to escape from the UN attack. Bobbie has to circumvent the security override locking the doors in order to get both herself and Avasarala into the docking bay. To accomplish circumvention, Bobbie goes to the outer hull of the ship, using the weapon on her suit to cut a way out. After a near fatal slip, Bobbie eventually makes her way to the outside of the docking bay. Bobbie forces her way through a lock and into the bay, opening an airlock for Avasarala to enter the Razorback. After Avasarala gives some antibiotics to Cotyar as part of her farewell and as a token of appreciation for all of his devotion to her because of her son. Bobbie and Avasarala get into the Razorback while Cotyar and the tech use the dropship to flee the Guanshiyin which is destroyed by UN attack soon after.

On Tycho Station, Fred and Drummer discuss the acquisition of the protomolecule sample from Naomi. Fred says he has already contacted Anderson Dawes about getting access to the scientist Cortazar, so the OPA can control the protomolecule. Drummer is upset because Fred decided to contact Dawes after what he did previously. Without giving Drummer much of a choice, Fred informs Drummer she will be sent on a mission to rescue the Nauvoo and transform it into a military behemoth for the Belt.

On the Rocinante, Naomi wants to go back to Tycho Station and tries to convince Amos and Alex that it is the best option available. While Holden reviews some sensor logs on the Rocinante, he discovers the protomolecule made a signal on Io, which is where he deduces is the location of Mei Meng. The whole crew gets together to discuss what they should do next, they are about to be in a combat zone, being close to escalating situation over Ganymede. When Naomi makes a plea for her plan of returning to Tycho, Holden declares it is a new day, he apologizes to Prax for using him and his daughter for information and states that protomolecule doesn't matter anymore, Mars, The UN and the OPA all have it. Holden states his new plan is to rescue Mei on Io. After some hesitation from Naomi, Amos says he is in and Alex is going to setup a flight plan.

Fred reports back to the OPA[edit | edit source]

The crew distances themselves from Naomi[edit | edit source] 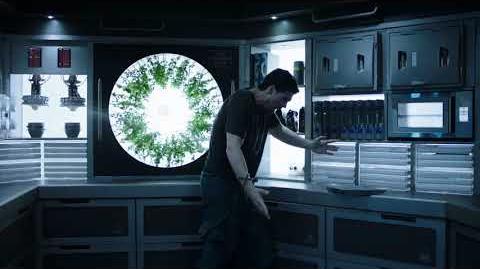 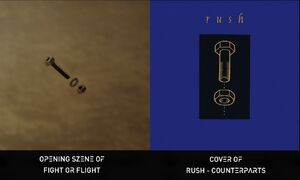 Retrieved from "https://expanse.fandom.com/wiki/Fight_or_Flight?oldid=70460"
Community content is available under CC-BY-SA unless otherwise noted.