watch 01:33
The Loop (TV)
Do you like this video?
This article is a stub. You can help The Expanse Wiki by expanding it. 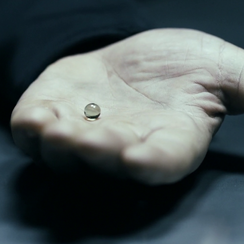 Focus drugs are known to be used by Martian naval intelligence.[1]

Use and effects[edit | edit source]

The user is granted greater alertness, awareness and recall to have better recall for details in past events making it suitable for depositions or debriefings. Another version of the drug provides full historical information on a subject to be known instantly. It also provides improved awareness and makes it possible to detect even small changes in facial expression or body language. For this reason, Martian naval intelligence uses this version of the drug during interrogations.

In the novels, the drugs are dispensed as lozenges, large flat discs of hard-packed powder. A lozenge might be an inch diameter or slightly larger. The user must suck on one to release the active ingredient and have the dose take effect, lasting only a few minutes each.

In the TV adaptation, these are clear liquid pellets in a small spherical gel casing, roughly 7mm in diameter.

The usage of focus drugs is easy to spot, as the pupils of the person using it tends to dilate, opening widely.

In chapter 11, focus drugs were used by Lieutenant Lopez when he interrogated Jim Holden on the MCRN Donnager.In chapter 4, focus drugs are administered to Bobbie Draper by Dr. Trish along with the stimulants before she awoke for her interrogation by Captain Thorrson regarding Ganymede. This leads her to fear she'd become blind but the doctor reassures Bobbie that sensitivity to light is a side-effect of dilated pupils.

Retrieved from "https://expanse.fandom.com/wiki/Focus_drugs?oldid=66246"
Community content is available under CC-BY-SA unless otherwise noted.