The Expanse Wiki
Register
Don't have an account?
Sign In
Advertisement
in: Locations, Moons, Outer planets,
and 3 more

View source
watch 01:32
She-Hulk Trailer Dropped - The Loop
Do you like this video?
Play Sound

Ganymede is the seventh satellite of Jupiter and the largest moon in the Sol system. It is one of the "Galilean moons", the four largest moons of Jupiter that were discovered by Galileo Galilei.

It is the only moon with any magnetosphere, ability to deflect charged ionizing radiation, making it the only place where dome-grown crops stood a chance in Jupiter's harsh radiation belt besides Callisto. It can be thought of as a place of harvest, and definitely a lynch pin in food economy in the belt. Large mirrors were placed around the moon, most likely to supply the Sun's light to the surface for crop growth.

The magnetosphere helps claim the Jovian moon the lowest amount of birth defects and stillbirths. This being the case many women come to Ganymede to deliver. It is the center of what made human expansion to the outer planets possible.

Ganymede Station was one of the first permanent human settlements in the outer planets, built as a long term colony with large domes filled with food crops. It was known as the safest station in the Jovian system, and many humans from other colonies traveled to Ganymede to deliver their babies.

During the Eros incident a revolt ended with sixteen dead.

After the Ganymede incident and the ensuing battle above Ganymede, destroying part of Ganymede Station, as debris from the solar mirrors fell directly over the station, laying waste to whoever was inside. Due to logistical issues it took a great deal of time to evacuate citizens from the station, often relegating those who escaped to months aboard-ship with nowhere to dock as refugees.

After the bombardment of Earth, Ganymede declares its neutrality, still recovering from the collapse of its environmental system years ago. While the Free Navy doesn't outright invade it, Ganymede is still firmly within its sphere of influence, and there are many Free Navy agents operating on the moon. Over time, Free Navy presence steadily increases, until the moon is effectively occupied by the Free Navy in all but name.

Following the Bombardment of Earth during the Free Navy Conflict, Ganymede had sworn loyalty to the Free Navy.[1]

The following is a close-up and wide-angle view of the space mirrors in Ganymede orbit. It was designed to cast light on the agricultural domes, which serves as the "bread basket" to the Outer Planets. 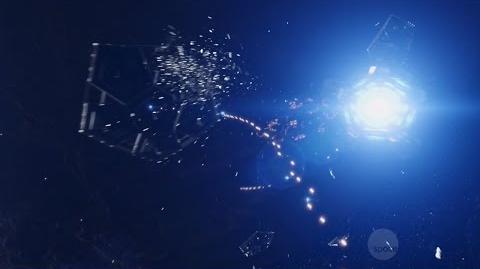