The Expanse Wiki
Register
Don't have an account?
Sign In
Advertisement
in: Technology, Military, Weapons,
and 2 more

Powered armor for use by Force Recon Marines

The early variants of vacuum-rated Goliath armor. This armor had a solid metal chest piece unlike later models.[1]

This Mark of armor is visibly different from its predecessor with a redesigned chestpiece and more sleek shoulder armor. Two lights are visible on the chest armor. The Mark III would be the basis for later Marks.

At the time of the Ganymede incident the Mark IV powered armor suit was the main suit in use by the Martian Marine Corps. Although lacking any visible differences to the previous model, the Mark IV has a completely reworked firmware incompatible with earlier Marks suits.[2]

In use by the time of the Slow Zone Incident. Marine Jed Trepp wore Mark V;[3] The Mark externally was the same in design as the two previous Marks.

Goliath armor utilizes an inbuilt multi barrel minigun [4] firing armor-piercing, high-explosive, and 6.25mm incendiary-tipped caseless ammunition.[5] Inbuilt RPGs (Rocket Propelled Grenades) have also been shown to be worn within the back of the armor and can be remotely targeted[6]. Grenades are also used by Marines in this armor and can be attached directly onto the armor exterior for storage[7]. The inbuilt weapons onboard Goliath power armor are DNA encoded and cannot be operated by anyone but the assigned Marine user. 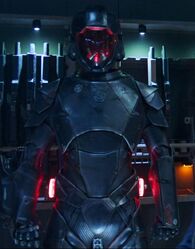 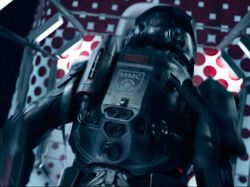 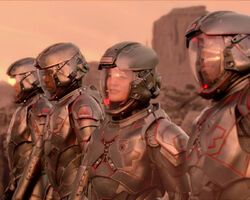 Bobbie Draper in her damaged suit 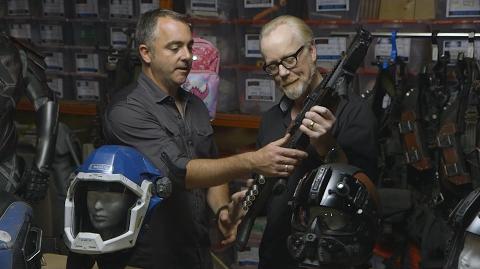 Adam Savage Examines the Props and Spacesuits of The Expanse!