"The Monster and the Rocket"
The Guanshiyin is Jules-Pierre Mao's yacht.

Although it's the size of ships that normally transport two hundred people, it only has a dozen staterooms. Each suite of rooms takes up nearly an entire deck of the ship, and each room has its own private bath. The ship also boasts a media center, game room, and lounge with a full bar and a large screen showing the view outside. The exterior bears a mural of a horse, painted in color.

"Guanshiyin" translates to "the one who perceives the sounds of the world" in English. It's also the name of the Buddhist bodhisattva of compassion, and the Chinese goddess of mercy.

The ship has two shuttle bays, at least one of which deploys a launching platform to the exterior of the ship.

During Caliban's War, one of the yacht's bays houses a standard short-flight shuttle while the other one houses the racing pinnace Razorback.

Guānshìyīn (Chinese: 觀世音) is a bodhisattva, or a person who attains enlightenment, or nirvana.[1] The person avoids transcending his mortal coil so that he can help others. Also, in Chinese lore, she is the goddess of compassion, mercy and kindness and is considered a mother-goddess and patron of seamen. 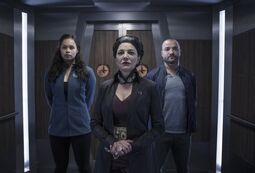