View source
watch 01:54
Obi-Wan Finale - The Loop
Do you like this video?
Play Sound

Ilus IV, simply referred to as Ilus, also known as New Terra by the United Nations, is a large Earth-like planet, with slightly over one gravity and a thirty-hour day. It is the fourth planet in its planetary system. The official name of the planet is Bering Survey Four[1], after the probe that first discovered its existence.

After the early settlement and rights conflicts were resolved, the UN and Royal Charter Energy designation for the planet lost favor and it became widely known exclusively as Ilus.

It has one large continent, and thousands of islands across its one giant ocean.

The planet has thirteen moons, albeit all low-albedo, making the night very dark. The satellites are all assumed to be alien artifacts due to their consistent spacing in the same orbit.

Ilus was settled and subsequently modified by the Ring Builders around two billion BXT[2]. The planet was designed to be a single massive refinery – one node among many in an energy distribution network of the Ring Builders colonial empire[3].

Ilus appears to have had its systems heavily automated, but ruins suggests that it was inhabited by the Ring Builders as well. Among the structures identified are libraries, subterranean habitation structures, and mountain top observatories.

Estimates place the evolution of flora and fauna on Ilus around 1.5 - 2 billion years ago[4]. This suggests that the Ring Builders kept strict control over the planet's ecosystem.

Ilus is the first planet outside the Sol system colonized by humans. The first settlers are Belter refugees from Ganymede, reaching the planet in a commandeered Mao-Kwikowski freighter, called the Barbapiccola. The settlers formed the settlement First Landing, claiming the planet and naming it "Ilus". This took place one year after fleeing from Ganymede, in 13 XTE, and shortly after Bering Survey 4 returned results.[5]

However, the United Nations planned to facilitate a controlled expansion into the new extrasolar systems, beginning with scientific missions prior to colonization of the new planets. With the planet colonized, the United Nations moved quickly to send a mission to Ilus – dubbed New Terra by the UN – giving an exploration charter to the private, Earth-based corporation Royal Charter Energy (RCE). The charter was finalized four months after the First Landing settlement was established,[6] and the Edward Israel arrived with the expedition 18 months later.[1] This haste, as well as the particular interest in Ilus, was largely spurred by the fact that a colony had been established. The colonists, ultimately originating from Earth's biosphere, brought biological contamination with them to the new ecosystem of Ilus. Additionally, their presence challenged the lawfulness of proprietary rights claims on any resources found.[5]

The disparate names employed by the UN and the Belt colonizers helped to inflame Belt-Inner Planet tensions.[1][6]

In order to protect against what they felt was a threat to their colony, a group of colonists form a planet-side, OPA-styled, insurgent cell and destroy the landing pad. That landing pad was one which the RCE had commissioned original settlers to build.[7] This act wreaks damage to the inbound shuttle, causing it to crash land and resulting in many deaths, including that of UN-appointed Governor Trying.[1] This indirectly leads to massive changes taking place on Ilus by way of a joint UN-OPA appointed mediator being dispatched to resolve the conflict. The mediator, Captain James Holden Books • TV of the Rocinante Books • TV, inadvertently allows contact between the Sol Ring's Investigator and the local alien network. Consequently, the remnant alien systems of Ilus begin to awaken.

Having been dormant for around two billion years, many systems malfunction upon start-up[8][9]. This includes an enormous sea-cooled fission reactor located underneath the archipelago of Ilus's ocean in 14 XTE[10]. The melt-down of this reactor results in a three-kilometer high tsunami that traverses the planet in about 6 hours. While the inland location of First Landing shields the settlement from the waves, the colony is impacted with 300 km/h winds,[10][11] with gusts up to 370 km/h[12]. The colony is completely annihilated by the storm,[12] with devastation extending several hundred kilometers inland[13]. The colonists themselves manage to survive the nearly day-long destruction by taking refuge in a nearby alien ruin.[14]

Following the storm, The Investigator Books • TV manages to shut down the local alien systems.[15]

As of the Laconian unification, Ilus has become known as the dominant name for the planet and programmable antibiotics is a primary field of research.

The surface of Ilus is broken into two main features: a single massive continent and a single massive ocean; each account for about half of Ilus's surface area. A massive desert region exists over most of the southwest quarter of the continent; First Landing is located just North of this region[11]. North of the desert, sandstorms are common, typically appearing in the late afternoon and lasting through sundown[16]. Further northward, the land becomes significantly more temperate and arable.[13]

Opposite of the continent, the ocean displays an archipelago chain with thousands of islands, the largest of which are viewable from orbit.

The atmosphere on Ilus is similar to that of Earth, being breathable to humans with no observed complications. As with most of the planet, it too demonstrates a degree of engineering. Ultraviolet light reaches the ground with a highly modulated amplitude, reminiscent of a carrier signal. This pattern in the light is not observed prior to it entering Ilus's exosphere, and the cause remains unknown. Furthermore, it remains a mystery why Ilus's atmosphere is present when no geologic activity, and thus no geodynamo, is present.[17]

The geology of Ilus is one of the most indicative signs of the planet's engineering. For instance, tectonic plates on the planet appear to be machined to high accuracy. Surveys of the underlying plate of the southern planes has detected no measurable curvature; the underside of the tectonic plates appear to be completely flat[16]. Furthermore, the planet boasts several veins of cosmically rare minerals,[3] most notably lithium. These veins are far larger than would be expected for naturally occurring deposits as well as having purities unachievable by any known, natural phenomena.[16]

The archipelago itself houses numerous[3] nuclear reactors, suspected to be fission reactors by the RCE science team.[10] The placement of these in the archipelago, or why the archipelago may have been created, presumably to provide sufficient coolant for the reactors via the ocean. The energy output of these is enough that, during a meltdown, they create conditions that mimic vulcanism on the islands.[17]

Ilus hosts a diverse ecosystem composed of many organisms reminiscent of and filling analogous niches to plants and animals of Earth. Unlike Earth, however, the biology on Ilus makes use of bichiral protein structures[4]. Biochemical surveys have also detected what appear to be stable, complex molecules that incorporate transuranic elements.[17]

The arid regions north of the southwestern desert have sparse fauna, dominated by small shrub-like species[18]. Several common species have been documented prior to the devastation of the melt-down's storm surge. One of these is a grass-analog with black coloration. When cut, it turns gold as it dies and gives of a scent reminiscent of manure and peppermint[19]. Also common is a small plant-like species that is notable for retracting its photosynthetic organs in anticipation of the region's daily sandstorms.[16] By far, the tallest is a species that stands over 1m tall. This species is capped with a corrugated, iridescent green structure that tracks the motion of Ilus's sun during the day, similar to Earth's sunflower.[20]

Further north, the environment becomes wetter and the number of species becomes more diversified. Forests of a large, red species of thin tree-like organisms reminiscent of fungi may be found at these moderate latitudes.[13]

Not much is known about aquatic life on Ilus. Orbital observations of the ocean at night indicates a bioluminescent organism, possibly similar to some of Earth's algae. It is common enough that, around the largest island in the archipelago, a faint green light can be observed from orbit.[11]

Several species of fauna are well known to the inhabitants of Ilus, and they fill many similar niches to that of Earth's animals. A common creature is the mimic lizard, named for its rough resemblance to Earth's lizards and its ability to mimic noises it hears[7]. Throughout the planet exist a variety of small, flying, bug-like organisms. Some appear to be scavengers and decomposers[13] while others appear to be parasitic and reminiscent of Earth's mosquitos and locusts. However, human blood appears to be toxic to this mosquito-analogs, and swarms quickly pass by humans once they have discovered this fact. In the show, the locust-analogs seem to be made out of metals like arsenic, silicon, and iron. Also, they were controlled by the proto molecule suggesting they were the original naturally evolved inhabitants of Illus before the Ring builders arrived. [18]

As with Ilus's flora, fauna diversify northward from the arid desert regions around First Landing. More bird-like organisms have been identified following the destruction of the storm surge. Northern latitudes are also home to organisms as large as Earth's elephants but with a body reminiscent of a caterpillar's segmentation.[13]

The presence of burrowing organisms in Ilus's arid regions has been documented as the melt-down's storm surge forced them to the surface. A particularly common burrowing organism is a yellow, arsenic based ,slug-like creature. These have been dubbed "death-slugs" by the colonists as the slime they produce for locomotion contains a neurotoxin capable of being absorbed through human skin.[12]

Ilus's clouds are often seen to have a greenish hue to them[21]. This is due to a microorganism living within the cloud's water droplets.[17] These organisms, making use of the body's water base, are capable of infecting the eye and causing a non-permanent blindness through obstruction[22]. This is the first case of cross-biome infection. 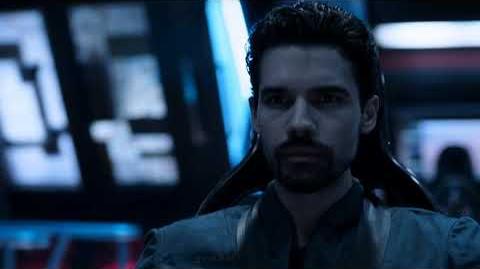