Deceased (killed by the protomolecule)

He has an occular implant with network communication capabilities. Avasarala blackmails his boss, Carlos Davila, into loaning him to her to spy on Holden.

In "Rock Bottom", Kenzo is seen aboard the Rocinante during the gas hauler disguise retrofit. Later, Kenzo is monitoring Holden in the bar.

In "Windmills", Kenzo is a stowaway aboard the Rocinante hiding between the inner and outer hulls. He is detected due to a broadcast Alex discovers originating from there while the crew is attempting to evade a Martian patrol. Amos investigates and starts breaking Kenzo's helmet when he catches the spy. Kenzo is locked in the airlock. He suggests Rocinante use Black Ops signals to compel the patrol to call off their boarding. When Errinwright stops getting his reports, the Undersecretary orders a strike team to Holden's next projected destination, Eros.

In "Salvage", Holden asks Kenzo to help identify the ship they found on asteroid BA-834024112 where Fred Johnson sent them, the stealth ship. Not providing useful information, Holden orders Kenzo to join the away party to board the stealth ship which they soon identify as the Anubis. They also learn that it captured the Scopuli's crew, it was the ship that killed the Canterbury, it came from Phoebe, and it has an unusual invasive biohazard aboard. Kenzo helps remove the Anubis' safe. Kenzo discourages the Rocinante crew from destroying the Anubis which they ignore and proceed anyhow. He does persuade them to go to Eros and to the Blue Falcon Hotel where he betrays them to call in assassins.

In "Critical Mass", Sematimba confronts CPM thugs for roughing up civilians who are barred access to the recently closed transit pods. Kenzo is in the crowd but remains silent and avoids detection.

In "Leviathan Wakes", Holden finds Kenzo in the shafts of Eros on their way to the docks and he denies him safe passage from Eros aboard Rocinante. Once Rocinante leaves, Kenzo is imitated then captured by the rapidly growing protomolecule construct at the center of Eros. 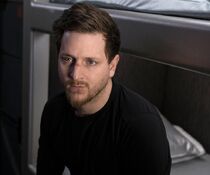 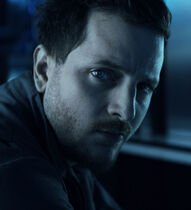 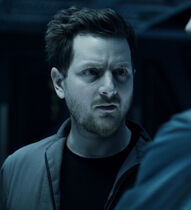 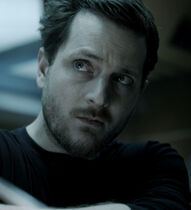 Retrieved from "https://expanse.fandom.com/wiki/Kenzo_Gabriel?oldid=50598"
Community content is available under CC-BY-SA unless otherwise noted.