Commander Klaes Ashford was a Belter who served as First Officer aboard the OPAS Behemoth. He was appointed by Anderson Dawes, and served as second-in-command to Captain Camina Drummer.

Ashford knew and had history with Camina Drummer, with both of them having worked on the docks on Ceres in the past. It is suggested multiple times by Drummer that Ashford spent a large majority of his life as a pirate.

Closely aligned with the Anderson Dawes faction of the OPA, he was given the rank of Commander in an attempt to formalize the OPA Navy- and thereby make it appear more legitimate- and was also said to be responsible for designing the "work in progress" navy uniforms. In his new position as a commander, he was shown to have become acquainted with Diogo Harari.

In "Delta-V", Ashford boards the newly christened OPAS Behemoth, alongside several other Belters (including Diogo Harari) sent by Anderson Dawes. Meeting with Captain Drummer, he announces that he has been sent to act as her first officer and second in command, with intent that his allegiance to Dawes' faction of the OPA will help balance out Drummer and the majority of the Behemoth crew's allegiance to Fred Johnson's faction.

At the command deck, he briefly clashes with a member of Drummer's crew, based on old grievances. He admits to Drummer he believes he should be the one in command, but concedes that it is now a matter of "politics and perception", and is happy to serve under her. When Drummer decides to discourage the crew of the Behemoth from taking narcotics (after one skiff pilot dies) by spacing a main supplier of Pixie dust, Ashford discourages her. He tells her that if they and the newly established "Belter state" want to be treated as equals by the United Nations and Martian Congressional Republic they must treat people with and abide by the rule of law. Drummer reluctantly relents, and instead forces the workers to place any narcotic material they have in the airlock, for it to be spaced at a later time.

In "It Reaches Out", Ashford brings a bottle of liquor along with three glasses to toast on the belter kid opening the gate with Camina and Naomi. Later, when the Seung Un is blown up by Melba Koh and the fake massage blaming Holden for it is broadcasted, Ashford, to the horror of Naomi, brings in the corollary that they must fire on the Rocinante immediately to clearly show the other factions that Holden was not speaking in their name.

In "Intransigence", Ashord tells Naomi, that according his information, the Rocinante was not destroyed by the Behemoth's missile and that he is glad about that.

In "Fallen World", when the speed limit in the Slow Zone changes again due to the actions of Bobbie's team on the Ring Station, Ashford and Drummer are pinned by a shifting excavator. After Drummer nearly crushes herself with the excavator in order to free at least one of the command staff, Ashford takes command of the Behemoth. Knowing that the only way for the flotilla's many injured to survive is the Behemoth's ability to create spin gravity, he orders to spin up the ship's enormous colony drum.

In "Congregation", when Holden is brought to the Behemoth, Ashford is questioning him about what happened on the Ring Station. After Holden tells him about his visions, Ashford concludes that Holden is insane. When Naomi returns to the Behemoth, Ashord orders her to repair the ship's grid in exchange to see her visiting Holden in the brig. Later, on proposal of the science officer of the Thomas Prince, Ashford agrees to nuke a skiff close to the Ring Station to research the outcome. When consequently the Ring Station starts generating magnetic pulses like a railgun charging up, Ashford remembers Holden's statement about his vision: "They burned whole solar systems like they were trying to cauterize a wound." This brings him to the belief, that the must destroy the Ring.

In "Abaddon's Gate", Ashford believes the best action during the slow zone incident is to destroy the Ring from within, which would strand everyone still in the slow zone. Not factored into his decision is this very attempt would also trigger a supernova of Sol. In turn, this action would end up killing all humans within the solar system, the very thing his plan is meant to prevent. Amos, Alex, Anna and Monica Stuart manage to convince the rest of the flotilla to follow Holden's advice to shut down all of the ships' fusion reactors. When Holden and Naomi surrender and plead to him, Ashford orders their execution and attempts to fire the tight beam communications array turned laser cannon. At that moment, having a change of heart, Clarissa unleashes on Ashford and manages to force a reactor shutdown. 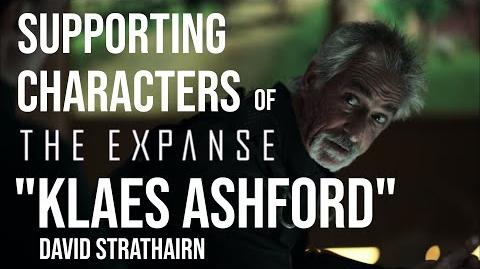 Retrieved from "https://expanse.fandom.com/wiki/Klaes_Ashford_(TV)?oldid=57646"
Community content is available under CC-BY-SA unless otherwise noted.