The Knight was the Canterbury's Books • TV shuttle.

The Knight was the sole shuttlecraft of the Canterbury, meant for the purpose of moving personnel to and from other ships, stations or the surface of planets. When not in use, it was externally attached to the ship.

Regulations dictated that the Canterbury needed at least one shuttle capable of traveling in atmosphere, but due to faulty seals, its landing gear was not operational.[1]

At the time of the ship's destruction, the crew had been raising concerns about the Canterbury's state of repair. The Knight, as its shuttlecraft, was no exception and the crew joked that the atmospheric leaks should be 'manageable'.

Shaped like a 20 meter-long tea kettle, the Knight had a diameter of about 10 meters. The majority of the ship's volume is taken up by its main compartment which the crew occupied. In the center of the floor was an airlock where one could enter and exit.

The Knight’s main drives were three fusion torch drives, a type of pre-Epstein drive, significantly less efficient than the more modern drive technology available on other ships at the time. Additionally, the ship could be propelled by a much slower steam propellant system (hence the concept of "flying tea-kettle"), and also had a number of reaction control system thrusters to enable relatively quick rotational maneuvers when required.[2]

As with nearly all spacecraft in The Expanse, the Knight was arranged so that 'down' in the pressurized crew area points aft along the direction of the main thruster so that when under thrust, constant acceleration creates a feeling equivalent to that of different levels gravity for the crew.

Being a support craft for a merchantman, the Knight was unarmed.

It was used by James Holden Books • TV to investigate the distress signal emanating from the Scopuli when it was moored near the asteroid CA-2216862.

When Holden was ordered to investigate the Scopuli, the crew joked about its ability to hold air. Like the Canterbury itself, it was long past the time when a major refit was needed. This is why, as part of his team, Holden chose to bring chief engineer Naomi Nagata Books • TV as well as fellow engineer Amos Burton Books • TV. He chose Alex Kamal Books • TV as the pilot and brought along the ship's medic, Shed Garvey Books • TV, in case someone needed medical attention.

After the destruction of the Canterbury, the Knight took heavy damage from the debris cloud, losing one of its drives, but survived. The crew was left with only hours of oxygen left and a broken antenna. The outer airlock door was also damaged, so opening the airlock door would cost precious air. Sacrificing everything onboard that could store power and an entire hour of air to get Holden and Amos outside to fix the antenna so Naomi could boost the signal with the excess power. Although Alex and Shed nearly died of hypoxia, they managed to get a distress call out. The Knight was recovered by the MCRN Donnager, which stowed the damaged shuttle in her immense internal docking bay.[3]

When the Donnager was attacked and boarded, the Canterbury's survivors and one wounded MCR marine escaped aboard the Corvette-class fast-attack frigate Tachi Books • TV also docked in the hangar. The Tachi's PDCs sprayed rounds all through the docking bay, and a stream of 40mm bullets shredded the Knight into scrap where it was docked. What was left of the shuttle was vaporized when the Donnager was scuttled in a nuclear explosion.[4] 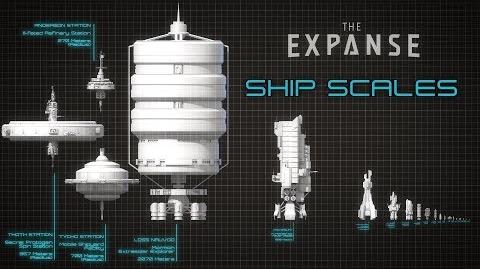 How Big Are The Ships of The Expanse?
by