The Expanse Wiki
Register
Don't have an account?
Sign In
in: Spaceships, UN Navy, Military,
and 4 more

View source
watch 01:23
Wiki Targeted (Entertainment)
Do you like this video?
Play Sound

The Leonidas-class battleship is a class of battleship in service the United Nations Navy (UNN).

Though already decades into its service, the Leonidas-class is one of the newest additions to the UNN fleet, introduced as part of a poorly funded and largely unsuccessful attempt to modernize its fleet, before it fell into complete stagnancy.

At only 270 meters long, the Leonidas-class is oddly small for a battleship, presenting a smaller target for hostile weapons during long-range engagements. However, much of this advantage is lost.

Despite its small size, the Leonidas-class suffers from poor acceleration resulting from its low-quality S-250 series Epstein drives, units considered outdated even before ships of this class entered service. Low-quality targeting suites also affect the efficiency of its torpedoes and point defense cannons (PDCs) negatively, requiring more to be added to increase effective point defense and torpedo impact probability in a sort of "spray'n'pray" mentality. This, however, further weighed the ship down and made it even slower. The ship's poor agility mixed with its sluggish acceleration rightfully earned the class the nicknames "Lead Leos" or "Brick Buckets."

Unlike Martian PDC techniques, the 25 Mikazuki Munitions PDCs aren't able to be retracted into the battleships hull, exposing them to impact damage. However, this does give them slightly more reaction time in certain situations.

In addition to these problems, its railguns cannot be adjusted while under thrust, forcing the ship to strafe an engagement zone at a drift or even coming to a relative stop once within engagement range.

The ship does have some positive traits; it is practically unreachable by torpedos due to its relatively small size and high concentration of PDCs, and it is considered effective as an assault ship with its modular troop barracks and sizable M-type dropships, allowing it to carry and deploy more UN Marines than even some dedicated assault craft. However, its sluggishness makes it vulnerable to railguns, especially as its own railguns are heavily outranged by most other ships carrying them.

Overall, while still a fairly reliable and effective warship, the slow, heavy, and poorly planned Leonidas-class stands as a symbol of the once prideful, United Nations Navy's, fall into complete stagnancy, in dire need for a drastic overhaul.

The Leonidas is armed with:

Although already decades old, the Leonidas-class is one of the newest additions to the UNN fleet, produced as part of a poorly funded and largely unsuccessful UNN fleet modernization program.

A Leonidas-class vessel served as a troop carrier for the UN Marines under the command of Colonel Fred Johnson who participated in the Anderson Station Massacre, ordering the ship to fire on the station and killing everyone onboard.

Years later, a Leonidas-class battleship, the UNN Nathan Hale, was dispatched to Tycho Station to arrest Fred Johnson on suspicion of being involved with the construction of the stealth ships that destroyed the Canterbury and the MCRN Donnager. However, the ship's orders were ultimately rescinded when Johnson broadcast a message accusing the UN of developing the stealth ships themselves.

After the Eros Incident, the Nathan Hale was ordered to perform a hard burn in order to reach Phoebe before the MCRN Scirocco, which prompted the Martian assault cruiser to destroy the moon with a barrage of nuclear torpedoes in order to prevent the research station from falling under UN control.

Numerous Leonidas-class battleships participated in the chaotic Ganymede incident, primarily relying on their PDCs during the battle given the close proximity of the MCRN and UNN ships in orbit and the ensuing confusion.

Later, a Leonidas-class escorted Chrisjen Avasarala to the Guanshiyin to meet with Jules-Pierre Mao and later attempted to assassinate her under orders from Sadavir Errinwright, ultimately being crippled by the Rocinante in CQB while giving chase to the Razorback. While not outright confirmed, it seems to bear the hull number of the UNN Nathan Hale.

Several Leonidas-class battleships were a part of the UNN delegation to the Ring, and at least one was part of the fleet to enter the Slow Zone.

Prior and during the early stages of the Free Navy Conflict, sixteen Leonidas-class ships were docked at Lovell City docks on Luna. 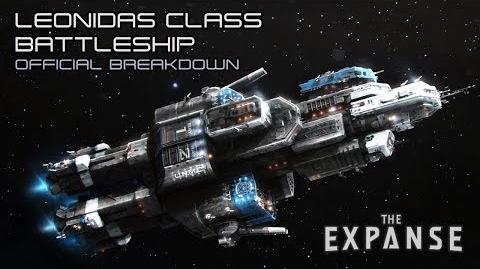