Late 22nd - early 23rd century: Independence from the United Nations granted in exchange for access to the Epstein drive

The Martian Congressional Republic (MCR) is the governing body that rules over the four billion inhabitants of Mars and is one of the two human superpowers. Their flag is reminiscent of Mars and its two moons, Phobos and formerly Deimos.

The Congressional Republic is often in direct competition with Earth and its governing body, the United Nations. Although Mars has a significantly smaller population than Earth, the ruggedness of the people, as a result of the harsher environment and sparser resources, makes Mars a worthy counterweight to Earth's power. The Martian Congressional Republic Navy, although smaller than its UN counterpart, is considered to be more technologically advanced. The executive branch of the MCR is led by the Prime Minister.

Like Earth, they actively oppress the Belt and its people.

When the Donnager is destroyed by what is believed to be OPA ships, Mars blames the Belt, and deploys the majority of its fleet to it. Later when Holden released information on the ships that destroyed the Donnager were actually made on Earth, United Nations Navy ships fired on Martian Congressional Republic Navy ships in Mars' orbit and destroyed the Deimos deep radar station. The MCRN then orders all their ships in the system to return to Mars and declares war on Earth.

After the protomolecule was unleashed on Eros during the Eros incident, and its existence became known to the public, the Martian fleet nuked Phoebe into a thin gas that was sucked into Saturn’s gravity.

After the Eros incident, delegates from the UN, MCR, and OPA attend a peace conference of Ceres.

In the eighteen months since the Eros incident the MCR and UN have been in the UN-MCR Cold War. When UNN and MCRN forces engage over Ganymede both Nations attend peace talks on Earth. These talks fail and the MCR enters the UN-MCR War. The war is short and after the Io Campaign it ends with a peace treaty.

With the Ring network open a huge proportion of the population of Mars begins emigrating to new worlds. With this emigration the terraforming project for Mars would never be completed. Unknown to the MCR government at this time one of its Admirals Winston Duarte had realized that Mars was economically doomed and planned to defect to a new system with a large proportion of the MCRN fleet. As part of this many more Extremist factions of the Outer Planets Alliance were contacted and supplied in secret with MCRN Frigates and equipment with which to launch a war against Mars and Earth.

During a diplomatic trip to Earth a MCRN fleet escorting the current Prime Minister Nathan Smith most of its escort moves off to engage mysterious attackers. When new escort ships arrived they unexpectedly attacked the Prime Minister's fleet and boarded his ship. Nathan Smith was forced to abandon the ship onboard the racing skiff Razorback on which he successfully escaped to Earth.

At this same time a third of the MCRN fleet broke off and moved towards the Sol Ring. The MCR did not know why this fleet had moved off and could not contact it. The MCR was in disarray due to this crisis and its Prime Minister off world.

With Nathan Smith on Earth the Martian government called for a vote of no confidence in him. This vote was successful and Emily Richards became the new Prime Minister. The MCR was still in a crisis and it struggled to know which of its assets it still controlled. The government was eventually stabilized by Richards and the remaining loyal MCRN forces were able to participate in the Consolidated Fleet Offensive.

The MCR economy had recovered in the thirty years after the Free Navy Conflict. Its fleets participated in the Earth-Mars Coalition.

When the Earth-Mars Coalition Navy and Transport Union fleet was defeated by the Laconian Imperial Navy the Martian Congressional Republic became a cilent State of the Laconian Empire.

Four years into subjection to the rule of the Laconian Empire the status of the Martian Congressional Republic was unclear. However, the office of Prime Minister of the MCR no longer governed Mars; with the planet now ruled by a Laconian selected Governor. The Military branch of of the government was also disbanded.

When the United Nations fired half of its nuclear arsenal at Eros which was moving towards Earth during the Eros incident the MCR diplomatically agreed to not consider it a first strike against Mars.

Colonization and deterioration of Martian society

The new Secretary-General of the United Nations Chrisjen Avasarala visited Mars on a diplomatic mission as the first sitting Secretary-General to do so since the declaration of Martian independence. She was met by the Prime Minister of the Martian Congressional Republic Nathan Smith at a dinner event.

By the time of the opening of the Ring network Mars and its cultural identity suffered under increasing amounts of corruption and unemployment, exacerbated by demilitarization following the UN-MCR War and colonists seeking to inhabit the systems now accessible to humanity. While propaganda displayed a functioning Martian society, in reality many gave up on their lives on Mars and instead opted to be colonists. The terraforming project of Mars was increasingly regarded as obsolete and numerous terraforming facilities and towers were decommissioned, either due to budget cuts or lack of present personnel. However, the MCR government prevented the transit of colonist ships to the Ring systems at the Sol ring with the joint UN-MCR EMC ring gate fleet.

Underground Martian black markets were created, selling military technology and assets to Belters, most notably the Inaros OPA. A terrorist attack rocked the Mariner Valley shipyard, intended to cover up the stealing of multiple MCRN deposits of stealth technology by Inaros' faction.

With the simultanous attacks on Earth and Tycho Station, the MCR Congress was bombed in a terrorist attack and Mars was dragged into the Free Navy Conflict. While the MCR government and MCRN engaged Free Navy forces such as the engagement near Patroclus, Bobbie Draper was able to uncover a rogue faction inside the MCRN supplying the Free Navy with weaponry such as the stealth deposits and ships, most notably the Pella being a MCRN light cruiser, and additional MCRN heavy frigates and Morrigan-class patrol destroyers. Draper and Alex Kamal were able to witness multiple MCRN ships being supplied to the Free Navy by the crew of the MCRN Barkeith in the Hungaria group.

Now with their existence revealed and their tradeoff with the Free Navy finalized, after they acquired both the last Protomolecule sample and Paolo Cortázar, the MCRN fleet under the control of Admiral Sauveterre and Admiral Winston Duarte officially defected and attacked the EMC fleet at the Sol gate. With the UNN Truman-class and MCRN Donnager-class ships destroyed, the Free Navy and rogue MCRN fleet entered the Ring Space, while the latter approached and entered the Laconia system, activating a mine field at its ring gate. The MCR was completely incapable of reacting in time to regain control over its rogue naval elements. 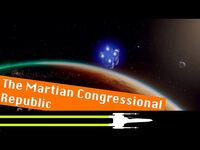 The Basics of the Martian Congressional Republic(MCR) - The Expanse Lore