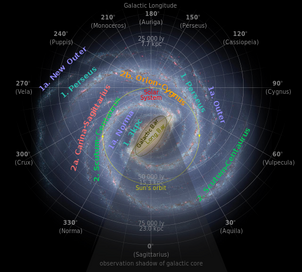 The Milky Way is a barred spiral galaxy that lies within the local group of the galactic neighborhood. It is approximately 100,000 light years in diameter and is estimated to contain 100 - 400 billion stars. The Milky Way is orbited by two small satellite galaxies known as the Magellanic Clouds. It is the galaxy where humanity resides. Possibly, the Ring Builders were once the galaxy's dominant species.

The Milky Way is a barred spiral galaxy of either SBb or SBc classification on the Hubble Sequence. It has two major arms, each sporting several minor arms that stem off of the major arm. One of these major arms, the Carina and Sagittarius Arm, is home to the Orion Arm, which is, in turn, humanity's origin. Splotches of intense star birth and formation can be seen in the arms. These areas are pink/red in hue and appear as wisps or clouds situated in the galactic plane. The Milky Way is visible from Earth as a band of light in the night sky, from which its English name derives from.

The Milky Way is possibly home to numerous civilizations, of which the most prominent were once the Ring Builders, who managed to establish a vast interstellar empire. However, they have since gone extinct at the hands of the Unknown Aggressors.

Modern humans evolved on Earth circa 200,000 years ago. Out of the several archaic human species, only Homo sapiens sapiens survived, while the others went extinct. Eventually, urban civilizations emerged and began expanding on their homeworld. From 3500 BC onwards, humanity continuously expanded its technological control over Earth's environment and resources, with the population slowly expanding from less than five million to nearly half a billion over the course of five millennia.

In the 19th century, humanity entered a phase of rapid industrialization and colonialization, resulting in an exponential growth of population and interconnecting all human societies. Within the next 500 years, the population skyrocketed from 500 million to an overwhelming thirty billion.

By the 20th century, the political world was divided into two major blocs, which would later clash in two global wars, each with death tolls previously unseen by humanity. Lasting peace would follow for four centuries, with no conflicts reaching the size of the world wars. By the 22nd century, humanity would break free of its homeworld's confines, establishing lasting colonies on Luna and Mars.

The discovery made by a Martian engineer, Solomon Epstein Books • TV, enabled humanity to expand farther in their planetary system, colonizing the natural satellites of gas giants like Jupiter and Saturn. By the 24th century, the entire system was colonized, with living standards differing heavily from Earth and Mars to the Asteroid Belt and the outer planets. Even with the vast technological advancements, no colony existed beyond the boundary of the Sol system. One journey to Tau Ceti system would later be scheduled via a generation ship, the Nauvoo Books • TV, requiring 100 years to traverse the space between the two systems. The plan never reached fruition, and the idea of an extrasolar colony remained a dream to humanity for the time being.

One year later, humanity discovered the Ring network, an ancient network of artificially sustained traversable wormholes that connected many systems across the galaxy. With interstellar travel now possible within reasonable amounts of time, humanity would go on to escape the confines of their home system and establish thriving colonies in other systems. Peace would last for several years, until the inception of the Free Navy, an authoritarian group which sought the subjugation of the two human superpowers, the United Nations and the Martian Congressional Republic. In the wake of the bombardment of Earth, all human factions united their forces into a singular military body, the Consolidated Fleet. Eventually, after many battles in the Sol system and beyond, the Consolidated Fleet would eventually defeat the radical group. Even though victorious, member nations of the Consolidated Fleet were economically crippled, ensuring that the exodus out of the Sol system would increase in its intensity. However, many chose to stay and begin the rebuilding process.

Retrieved from "https://expanse.fandom.com/wiki/Milky_Way?oldid=51531"
Community content is available under CC-BY-SA unless otherwise noted.