The Expanse Wiki
Register
Don't have an account?
Sign In
Advertisement
in: MCRN ship classes, Destroyer classes, Spaceships,
and 3 more

6 (+ 2 MMC)[1]
The Morrigan-class is a class of patrol destroyer used by the Martian Congressional Republic Navy (MCRN), designed to be a low-cost combination of a patrol torpedo boat and a destroyer meant to be mass-produced and deployed on security assignments. It also is the smallest vessel employed by the MCRN. Some were modified with stealth capabilities. While smaller and cheaper, it was still designed with top of the line equipment and capabilities, allowing the ship to take on other vessels out of their weight to some degree.

The Morrigan-class was introduced in the MCRN during a fleet-wide modernization program that included the Donnager-class battleship and Corvette-class light frigate. To overcome the numerical superiority that the U.N.N. has over the MCRN fleet, the Morrigans were purposefully made small and cheap to maximize the number of destroyers that could be built and deployed, though not so much as to sacrifice its quality.

Ships of this class and Corvette-class frigates are able to be stored in Donnager-class battleships, with 12 Morrigans capable of being stored in a single Donnager-class.

The Damascus, Iceni, Avalanche, and Hamill-Stewart were all used in Operation Silent Wall, in which Captain Theresa Yao and the Donnager used the ships during their anti-pirate campaign in the belt. None of those ships would make it back to their mothership, as it was destroyed before they could properly be recalled.

In "Rock Bottom" the Scipio Africanus boarded a Belter prospector ship Xinglong and was later attacked by it. The Xinglong was unable to damage the ship, and the Scipio Africanus retaliated by firing a missile that destroyed the prospector ship. By the time Fred Johnson accused the United Nations (UN) of constructing the stealth ships, the Africanus was to be stationed at the Cronian (Saturnian) moon, Titan.

After Eros impacted Venus, the Shandian, a modified vessel of this class, equipped with stealth capabilities, shadowed the UNS Arboghast until it disappeared.

Another of the Morrigan-class, the Kittur Chennamma, was found derelict and heavily damaged by the crew of the Rocinante, where they scavenged the ship for supplies after running low on PDC (Point Defense Cannon) rounds and torpedoes. There, the crew also discovered and rescued survivors inside of the ship. After a failed ship takeover by the survivors, the crew of the Rocinante repaired the Kittur Chennamma enough to be able to make it back to Mars, where the MCRN Hammurabi picked up the survivors and left the wreck of the Morrigan-class adrift, as it was too damaged to make full repairs cost efficient.

Multiple Morrigan-class patrol destroyers were present in the Martian breakaway fleet that would eventually establish the Laconian Empire.

At least one MCRN Stealth coated[2] Morrigan-class patrol destroyer was present and destroyed in the First Battle of Medina station. Several more took part against the Free Navy's retreat to the Sol Gate on both sides.

The Morrigan-class is 31 meters long, small enough to fit inside the internal hangar bays of a Donnager-class, which makes it ideal for complementing a small flotilla. It is very compact in that two Morrigan-class patrol destroyers could fit into the hangar space which one Corvette-class frigate occupies. In order to fit two Morrigans, however, one ship on each platform was required to be docked inverted via ceiling clamps.

The ship lacks a ventral PDC, which creates a hole in its defense grid. This forces the Morrigan-class to rely on its maneuverability or other ships to cover this side.

They were known to amass together, acting as a large flotilla, presenting any ship as fast, deadly, & numerous opponents. Due to these characteristics, the Morrigan-class stands as a notable exception to the MCRN preference for overcoming disparities in total fleet size by maintaining a technological edge in ship design. 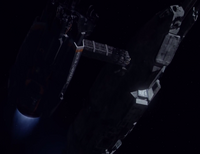 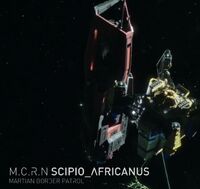 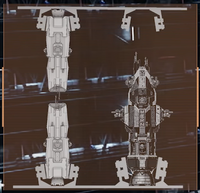 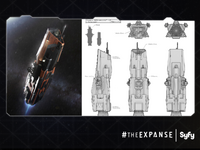 Scale to other small vessels 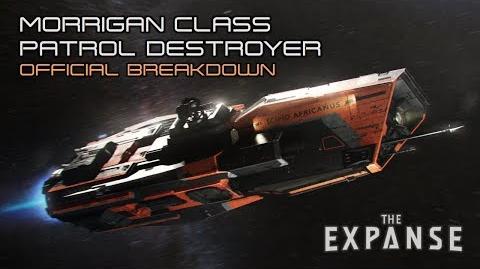