The Nuclear Strike on Earth is an engagement of the UN-MCR War, triggered by the United Nations as a response to the first strike by the UN to destroy the MCR's nuclear first strike capacity.

Before the UN-MCR-War, the Martian Congressional Republic Navy deployed five Stealth C Ballistic Missile Platforms in space around Earth as first strike weapons, but mainly as a mean of nuclear deterrence. The United Nations Navy deployed the its stealth-penetrable-Watchtower spy satellites in an attempt to localize the platforms. Finally, Watchtower-14 discovered the location of one of the MCRN Stealth C Ballistic Missile Platforms. After a second Platform was located, the United Nations Navy was able to plot the locations of all five confirmed platforms, successfully tracking them down.

Undersecretary Sadavir Errinwright pressed the Secretary-General of the United Nations Esteban Sorrento-Gillis to launch a first strike using Earth's planetary defense railgun platforms against the Stealth ballistic missile platforms. The Secretary-General was hesitant to launch a strike as the war was currently only being fought in the Jovian system and not at either of the two power's home planets. Later on, Sadavir Errinwright was able to convince Sorrento-Gillis to authorize the attack.

The strike began when the first UNN railgun platform fired, followed by three further Railguns all of which were timed to hit their targets simultaneously. The fifth railgun, however, malfunctioned due to having been powered up and down hours earlier. The fifth platform was eventually fired with delay, but all five MCRN platforms were destroyed. The delay however, enabled the fifth ballistic missile platform to fire off one of its missiles as it was destroyed.

The United Nations Security Council was celebrating when it learned of the nuclear missile launch. The Martian missile reached Earth and deployed twenty smaller nuclear warheads contained within it towards the planets surface. Fortunately for the UN, planetary defenses were able to destroy the majority of these warheads, however one warhead penetrated defenses and struck the planets surface near Goias Maior, South America (not quite near the present day Brazilian city of Goiânia as the map shows the impact on the current state of Mato Grosso, further West). The resulting nuclear detonation resulted in 2 million civilian casualties. 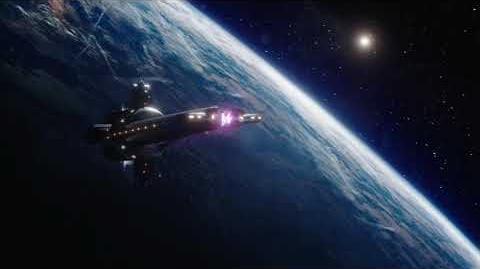 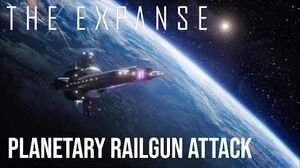