Octavia Muss works as a detective with Star Helix Security. She is Miller's former partner.

Throughout the series[edit | edit source]

In "Dulcinea", Miller joins Muss on scene in Medina where children are experiencing breathing problems because of bad air filters.

Later, Miller breaks up her after hours encounter with Cobb at the bar and he brings the Julie Mao case to Muss asking for a woman's intuition. He asks, "What would a rich girl do to really piss daddy off ... on Ceres?" Octavia takes this question as a roundabout backhanded way of criticizing and attacking herself. He makes an advance placing his hand on her's but she dismisses him telling him, "Good night, Miller!" She's irritated but cares enough to notice he's gotten thin and she reminds him to feed himself.

In "The Big Empty", Octavia walks up to Miller as he is reviewing Julie's dating app history. Miller shares with her what he learned from the dock master that Julie left aboard Scopuli, the ship that would be in the news for luring Canterbury with a distress beacon. Octavia notices the scar on Julie's chin line and wonders why she didn't have it fixed. Miller explains that it was a "badge of defiance".

In "Remember the Cant", Star Helix police are put on alert after Holden's broadcast about the lost Canterbury. Responding to Shaddid's warnings, Muss expresses her understanding why radicals would want to exploit the situation. Octavia is placed in charge of Miller's team but she isn't able to coral him as he heads off to investigate Julie Mao and the Scopuli

In "CQB", Miller seeks Muss' assistance with the body in the morgue when he can't locate Havelock. The corpse in the morgue gives him a different ID every time he's scanned. Octavia helps Miller determine that "Bizi Betiko" has a lot of implants including an ID Spoofer Mod and a memory crypt. He turns out to be a data broker. She watches Miller crudely extract the memory module from the guy's calf. She leaves when Miller still won't let her in on his case.

In "Back to the Butcher", the station is stirred by the release of video with Filat Kothari and some Loca Greiga thugs pinning one of the security company's own detectives to a wall using a prospector's spike, Dimitri Havelock. Octavia asks Cobb whether Miller had seen the video but he responds to her that Miller hasn't come in.

In "Rock Bottom", Muss arrives just in time to rescue Miller from the airlock, executing Dawes' two thugs that put him there in the first place. Back at Miller's place, she is reeling over having to kill anyone for the first time and he does his best to help her cope, but she tells him his advice is terrible. After all the traumatic stress, there is a tender moment where she finds herself longing to be close to him but, he is distracted by where the case is leading and ignores her to retrieve the data cube. On it, he finds the Dresden reports covering Protogen's Phoebe protomolecule experiments. Muss still thinks Miller is in way over his head and his "pay grade".

In "Windmills", since Miller was fired for his insubordination and refusal to drop the Julie Mao case, he leaves Octavia a strange message and she seeks him out. As she learns his plans to head to Eros, she suggests he bring her as a partner. He turns her down and insists on going alone. 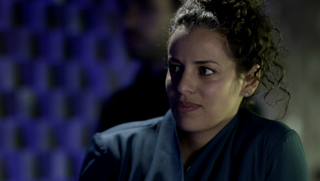 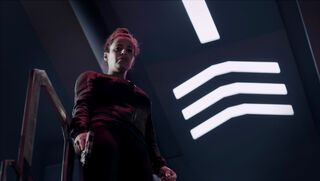 Add a photo to this gallery

Retrieved from "https://expanse.fandom.com/wiki/Octavia_Muss_(TV)?oldid=57615"
Community content is available under CC-BY-SA unless otherwise noted.