Praxideke "Prax" Meng[2] is a botanist of a soy farm on Ganymede Station, the breadbasket of the outer planets.

Serving as a botanist of a soy farm on Ganymede Station, the breadbasket of the outer planets, Praxideke lived there with his daughter, Mei. Because of Mei's rare disease, she is constantly in and out of the hospital for treatment.

Prax seems to be emotionally attached to his agricultural work and clearly values the station's inhabitants' lives.
As a botanist, Praxideke is committed to helping the people of Ganymede station and keeping its plant life in tip-top shape. More than anything, however, he cares deeply for his daughter, Mei, and is determined to find her at any cost.

In "Pyre", Prax is shown as a botanist on Ganymede who experiences the mysterious disaster that befell the large moon of Jupiter. His memory is hazy, but he remembers one of the large mirrors being destroyed. He wakes up on a refugee ship destined for Tycho, and is still reeling from the loss of his daughter when a group of “inners” from the ship are spaced. Apparently, tensions between Belters and "inners" have reached critical mass. Once on Tycho Station, Prax is confronted by Holden and Naomi who want to know what his relationship is to Dr. Strickland, a man who they think is tied to the release of the protomolecule on Ganymede. Prax is confused, because Strickland is only his daughter’s pediatrician. Armed with the knowledge that his daughter may still be alive, Prax hitches a ride with the Roci en route to Ganymede.

In "The Weeping Somnambulist", Prax is equal parts guide and prisoner aboard the Rocinante, but at this point, his motivations aligns with Holden and his compatriots: get to Ganymede and find out what happened to his daughter. Prax and the rest of the crew hitch a ride on an aid ship called the Weeping Somnambulist and conscript the unwilling help of two Belters for safe passage to Ganymede. The crew of the relief vessel are named Santichai and Melissa Suputayaporn

In "Cascade", Prax and the rest of the Roci crew, minus Alex, begin to canvas Ganymede for any signs of his daughter or Strickland. Their search leads them to a corrupt video technician named Roma who is exchanging his access to the video feeds for canned chicken. After some aggressive negotiations, they find the last video of Prax’s daughter alive, being lead into the bowels of Ganymede. During their search Prax notices that Ganymede is experiencing the first stages of a meltdown cascade (meaning, it's ability to support life is dying).

In "Here There Be Dragons", on Ganymede, Prax and the rest of the Roci crew attempt to locate where Strickland was taking Mei. They find Strickland’s cronies and appear to be ready to negotiate, when Prax sees Mei’s backpack and loses all restraint. In the ensuing gunfight, Amos gets shot before Strickland’s crew escapes. Afterwards, they find one of Strickland’s test subjects. It appears that he was injecting protomolecule into humans. Outside of the lab, after Amos' quick reaction returning a grenade, they hear a massive explosion and confrontation; someone or something destroyed the transport and receiving bay along with everyone in it. Thereafter, they see a protomolecule-human hybrid in open space without a vacuum suit.

In "The Monster and the Rocket", Prax, along with Holden and Alex, are in pursuit of the human-protomolecule hybrid hybrid on Ganymede. The creature seems to evade their every move, and Prax suggests that he himself try to reason with it, but Holden is convinced that it needs to be destroyed. When MCRN ships surrounding Ganymede target lock on the Weeping Somnambulist with Amos and Naomi aboard, Holden abandons the chase in order to save them. They are successful in this endeavor, however, unbeknownst to them, the hybrid creature seems to have latched onto the Rocinante and is now burrowing into the ship’s hull.

In "Caliban's War", Prax and the Roci crew discover the human-protomolecule hybrid aboard the ship and must construct a plan to destroy it. In the ensuing battle, Holden gets pinned to the wall by one of the freighter boxes that the creature hurled at him. Luckily, the creature seems more interested in finding the ship's nuclear power-source than killing the captain. Prax and Naomi board the exterior of the ship with one of the Roci’s nuclear missiles and, when Alex cuts power from the Epstein Drive, the creature is attracted to the energy of the missiles. Prax hurls the missiles in space, and the creature leaps after it. Then, Alex turns on the engines to incinerate the hybrid.

As war breaks out between Earth and Mars, a choice must be made as to where to seek refuge. Regrettably, Tycho Station is the best option at least until Holden determines that Strickland and Mei are very likely to be on Io. Despite Nagata's pleas, all others aboard decide they'll pursue the lead on Io. Prax nominates the covert name of the ship, "Pinus Contorta", a choice that underscores the thematic tone of current circumstances.[3]

Prax sets up plant gardens to help with recycling and filtering air on their trip to Io. He fails to properly secure tools which are released during high-g maneuvers creating a situation where he loses connection to his air supply and Amos must perform extreme acrobatics to rescue him.

He explains to Bobbie that they're going to Io because his daughter is likely being held there by Strickland as a test subject in order to perform protomolecule hybrid experiments and conversion to the creatures.

He coldly tosses aside the body of a Martian as he retrieves a crate of PDC rounds.

When they catch up to Lawrence Strickland, Prax is able to see through his lies and by talking to his reconnected daughter determine the extent of his treachery. He is unable to execute Strickland himself but, appreciably Amos is "that guy".

When asked about them by Cohen, Amos states that he refers to the plants in the workshop as "Prax panels" and echoes Prax's sentiment that he is his "best friend in the whole world" and "good company" 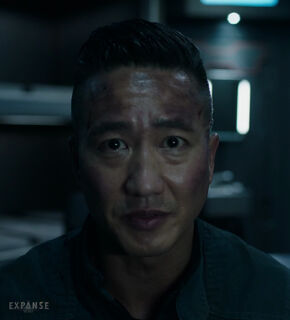 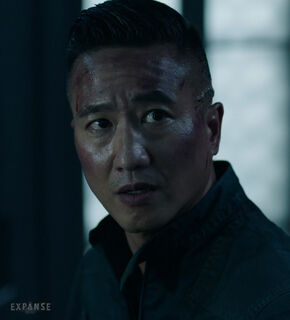 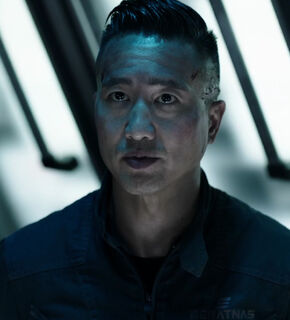 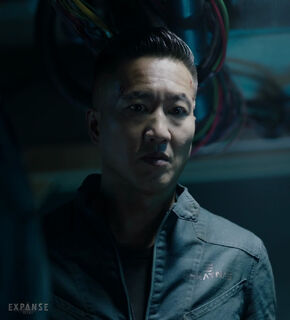 Though more scientist than fighter, Praxideke received some small-arms training from Amos. He also acquired Mei's backpack during his search for her.

Retrieved from "https://expanse.fandom.com/wiki/Praxideke_Meng_(TV)?oldid=56087"
Community content is available under CC-BY-SA unless otherwise noted.