The Expanse Wiki
Register
Don't have an account?
Sign In
Advertisement
in: Episodes, Citations needed, Articles in need of citation, Season 2

"Pyre" is the eighth episode of the second season of The Expanse. Overall, it is the eighteenth episode. It aired on March 15, 2017.

Naomi tracks down signs of the protomolecule; Fred Johnson's control over the OPA collapses.

A survivor of the Ganymede attack wakes up among his fellow refugees. They're on a rescue ship in the Belt, and there aren't enough supplies to go around. The man, Dr. Praxideke Meng, is looking for his daughter, Mei, who was at the clinic in Sector 4 during the attack. He sees a familiar face, Doris, who tells him that Sector 4 was destroyed, implying the death of Mei.

On Tycho Station, Diogo is in custody for helping Anderson Dawes escape with Cortázar. Fred Johnson grabs Diogo by the throat and leans on him for information, but Diogo is defiant. He tells Fred to go back to Earth, 'his real home'. Holden demands to know how Dawes was able to escape. It seems that he had some kind of inside help, thus a traitor.

When Edin announces a message sent from Dawes to Fred, he views it openly to witness Dawes accusing Fred of using his control of the secret weapon to maintain control over Belters. Dawes uses this to insinuate that Fred retains his devious, authoritative and possesive Earther tendencies which are such an affront to the Belter people. The Belters, Dawes says, refuse to be under anyone's thumb. He pledges to hand Fred's secret weapon over to his fellow Belters.[1]

On the rescue ship, Prax and Doris lament their refugee status. Anticipation is that it will take a generation to rebuild Ganymede. Doris mocks Prax that he is unsuited to the task and he must concede that reality. Doris proposes the notion that Mars could use a couple of agritechs like them. Doris offers the suggestion that they could start over together and she affectionately rests her palm over his hand, but Prax withdraws from this gesture.

On Tycho, Naomi secretly checks on the location of the protomolecule torpedo she hid out in space. She briefly considers sending it to Ceres, but reconsiders.[citation needed][Citation needed][2]

In some unknown corner of Tycho, a group of Belters, including rabble-rouser Staz, huddle together and watch Edin's replay of Dawes' earlier message to Fred Johnson. They seem especially interested in this weapon Fred kept from them.

On the refugee ship, the Earth-bound and Mars-bound ships are declared to have arrived. After previously declining Doris' suggestion, Prax has a surprising but pleasant change of heart. He attempts to board the ship for Mars with Doris, but the surly Belter in charge won't let him since he's clearly not an Inner. They say goodbye through the door and it looks hopeful until the Mars-bound refugees are suddenly shot out of the airlock. "Inners wreck Ganymede," says the surly Belter who's managing the passenger evacuation while Prax looks on in helpless horror.

Naomi and Drummer are checking the exterior antennae on Tycho for signal records of Cortázar's communications so they can find out where the protomolecule is. While they do, Drummer tells Naomi about how she and Dawes found Fred on Ceres and recruited him. Drummer tearfully expresses her loyalty to Fred. The women then find out where the protomolecule signal was coming from: Ganymede.

Dr. Praxideke Meng ends up on Tycho station, still in a daze from what he has seen. He tries to report the crime the Belters on the refugee ship committed, but he doesn't even know the name of the ship he was on. There's nothing the doctor can do about it.

Holden and Naomi put their heads together to figure out how the protomolecule ended up on Ganymede. They find a Protogen connection in one Dr. Lawrence Strickland, a pediatrician in a clinic on the station. They see a photo and identify one of the men with Strickland as a survivor on Tycho station: Dr. Prax Meng.

While Fred and Drummer have a disagreement about refugee placement, Staz leads a group of Belters to storm the control deck, aided by Edin, who appears to be the Tycho crew member leaking information to Dawes. Fred and Drummer are taken captive as Staz demands the stockpile of nukes.

Holden and Naomi find Dr. Prax Meng among the refugees and grill him about Strickland. Prax says Strickland is merely his daughter's pediatrician, though he also calls him a "gifted geneticist." Naomi takes Prax at his word, and in searching the footage from Ganymede, they see Strickland take Mei out of the clinic. Prax, realizing his daughter might be alive, begs Holden and Naomi to take him with them.

Edin repeatedly fails to circumvent the security on the nuclear missiles. Staz threatens to kill people if Fred keeps stonewalling him. He then has Black Sky OPA Leader carry out executions. Staz prods Drummer to join them, but she refuses so he shoots her in the gut to try and motivate Johnson to give him the security codes.

On the Rocinante, Alex finds Amos and tells him people need their help. Amos, remains detached, distant and dazed. After being prodded, Amos responds to Alex he doesn't feel like it. Alex pushes the issue triggering an angry retort from Amos about Alex not taking care of his family. This infuriates Alex who lunges aggressively to grab Amos. However, this escalates the situation to a dangerous level and the big man responds by dragging the Martian pilot and holding him precariously over the railing. Alex shocked and terrified, says Amos' name drawing him back to a more mindful presence and aware consciousness. Amos tells Alex not to make him fight "because who's gonna fly the ship?" insinuating the certain fatal outcome.

The tension is broken when Amos hears an alert leading the pair to quickly deduce there's an active rebellion in progress on the station. Prax's conversation with Holden and Naomi is interrupted as the emergency situation is relayed to them. Amos comes out of a hatch, does a flip to and make an EVA walk with mag boot and gloves on the skin of the station. He uses a cutting torch to open a section of plating and to access a valve where he kills the oxygen to the control deck. As Staz, the rebels, and Fred all begin to pass out, Fred is able to knock Staz's gun away from him.

Holden and Alex lead the charge onto the deck, where they capture the rebels. Alex tends to Drummer's wounds first but, as he leads her away, she grabs his gun and shoots both Staz and Edin in the head, effectively ending the uprising.

In the aftermath, Amos welcomes Prax to the Roci, Holden and Naomi pledge not to keep any more secrets, and Fred tells Holden that if he leaves to search for the protomolecule on Ganymede without bringing back a sample, he won't be welcome back on Tycho. Holden expresses his doubts that Fred will even be in charge when he gets back. 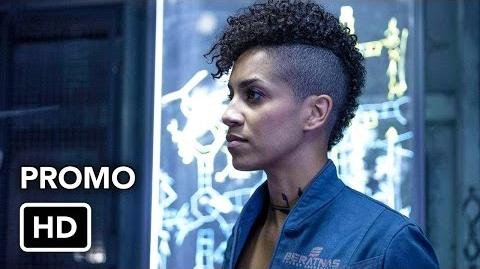 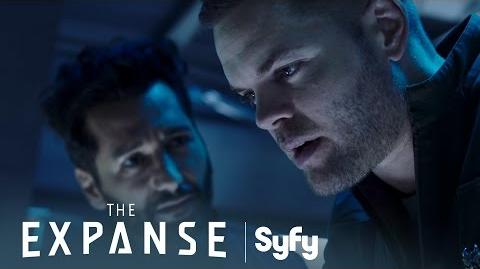 THE EXPANSE Inside the Expanse Season 2, Episode 8 Syfy 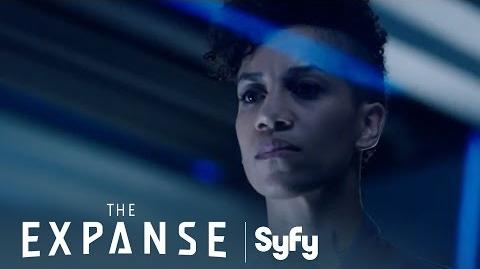 THE EXPANSE Making Sense of the Data Syfy 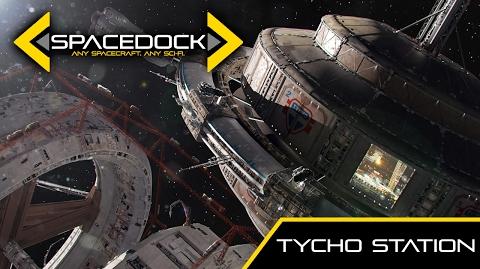 (The relevance of these entries, the accuracy of the assertions and the quantity thereof is questionable. These are under consideration for removal per community standards and consensus. Thread:9221)

Other Points of Interest of Biosphere 2: