Edit
watch 01:54
Obi-Wan Finale - The Loop
Do you like this video?
Play Sound
This article is a stub. You can help The Expanse Wiki by expanding it.

Unknown (In another universe or plane of existence)

The Ring Entities, also known as "dark gods," are mysterious entities that destroyed the Ring Builder Empire, leaving only its technology behind. When the Ring network was discovered, humanity came into contact with these beings and eventually reignited their vendetta against the Ring Builders and any who would use their Ring network.

According to the records accessed by James Holden on the Ring Station, the galaxy-spanning alien civilization responsible for the creation of the protomolecule, Rings, and the Slow Zone was destroyed by an unknown agency. This mysterious force demonstrated the ability to neutralize the civilization's hive-mind or collective consciousness and, as its influence spread throughout the galaxy, the civilization was forced to resort to extreme measures, destroying entire solar systems in a bid to stem the "infection".

On the frontier planet Ilus, Dr. Elvi Okoye and The Investigator were the first to encounter an artifact left behind by the force that destroyed the Builder civilization. The object, appearing as a dark, floating sphere bordered with bright light, was undetectable and invisible to The Investigator and other alien machines, but would render them inert if any passed within its radius. Elvi passed through the object herself while attempting to use it to shut down Ilus' defenses and survived the experience without ill effects. She did, however, experience a feeling of perceiving the very smallest of things, down to her component atoms.

While passing through the Laconia ring gate, the crew of the Barkeith, a Donnager-class battleship belonging to the breakaway MCRN fleet, experienced a similar phenomenon as Elvi had inside the Ilus artifact. The ship and all hands aboard were lost during transit.

The remnants of the Free Navy were destroyed by the same phenomenon as experienced by the Barkeith during the Second Battle of Medina Station.

When the Laconian Empire's Magnetar-class battle cruiser Heart of the Tempest fired its magnetic beam weaponry, the entire Sol system experienced a simultaneous blackout that didn't account for light delay. After everyone woke up, the crew of the Tempest found a sphere identical to the one from Ilus aboard their ship.

Winston Duarte instructs the Laconian Science Directorate to carry out an experiment to determine if the disappearance of ships traveling through the ring gates are the result of a natural phenomenon or the conscious work of a hostile intelligence. To test this, an unmanned ship would be sent through a gate, followed immediately by a second unmanned ship carrying an antimatter warhead. This was predicted to trigger a Dutchman event, in which the second ship would disappear, and subsequently detonate its warhead upon arriving wherever the vanished ships had been ending up. The experiment was carried out in the Tecoma system, which was judged to be a safe testing ground owing to its lack of habitable planets.

The experiment resulted in the hostile aliens triggering the collapse of the Tecoma system's neutron star, causing a gamma-ray burst aimed directly at the Tecoma gate. The aliens then proceeded to invade the Slow Zone and cause the disappearance of all human constructions within, including Medina Station. Only the crew of the Falcon, including Elvi Okoye and Fayez Okoye-Sarkis, survive this encounter with the Ring Entities, which are soon labeled as "dark gods" by the Laconian military establishment.

After the first Laconian antimatter experiments and the attack on the Slow Zone, the Ring Entities continue their consciousness-breaking attacks on humanity, with the episodes coming more frequently, without warning, and differing in their effects. Dr. Okoye speculates that the hostility of the Ring Entities is related to travel through the rings, which hurts them somehow, and suggests that the actions of Laconia have resulted in the aliens now viewing humanity as a threat. She likens the episodes of lost consciousness to how humans might treat an illness, speculating that the different nature of subsequent episodes is akin to switching from penicillin to tetracycline.

The Ring Entities first appear in the final scene of "Abaddon's Gate". As the Rocinante crosses the Sol Ring following the events of the Slow Zone Incident, Holden sees a presence moving towards him inside the surface of the Ring.

In "New Terra", Holden recalls the vision he experienced on the Ring Station in "Dandelion Sky". The vision portrays a protomolecule planet going dark, and swarm of the entities emerging from it. He later sees another Ring Entity when crossing the Ilus Ring. When Elvi Okoye falls into the artifact on Ilus, she sees the Ring Entities as dark tendrils flowing around her. She describes her experience as being able to feel the "spaces between things", and that she could sense a presence moving toward her. Holden replies that he feels the presence too, every time they cross a Ring.

On Tycho Station, Holden tries to convince Fred Johnson of the danger of the Ring Entities and shows him a recording of the artifact on Ilus from Elvi. She explains that their instruments have not been able to detect anything inside the artifact, and that small mammals sent through the artifact were rendered either catatonic or dead. Her recording is followed by a holographic simulation of what she saw when she fell through it. In "Nemesis Games", the Barkeith is destroyed by the Ring Entities in transit through the Laconia Ring, resulting in an ominous red flicker on the surface of the Ring. From inside the ship it appears like time is frozen during the attack.

Holden investigates the Barkeith's disappearance, and asks Naomi for help. With their limited data set, the only pattern she can find is that ships' disappearances happen in clusters. After asking Elvi for help on the matter, he receives a video message from her explaining that these events are precipitated by reaching some mass-energy threshold of traffic through the Rings. Upon reaching Ceres, Holden, in the belief that this issue is bigger than the war, tells Chrisjen Avasarala that they should share the information regarding the Ring Entities with Marco Inaros, which Avasarala protests. Following the Second Battle of Medina Station and destruction of the Ring Station railguns, Naomi suggests waking up the Ring Entities as a last-ditch effort to defeat Marco Inaros, who is on approach to the Ring. They achieve this by overloading the reactor of the ice hauler Giambattista and detonating the remaining three torpedoes in close proximity to the Ring, reaching the mass-energy threshold and resulting in the death of Marco Inaros. In the aftermath of the war, the Transport Union is conceived as an organization tasked with controlling and managing traffic through the Ring Space.[1]

While little is known about the alien civilization that created the Protomolecule, even less is known about the entities responsible for its destruction. As of yet, only two objects have been encountered that appear to have been created by the unknown agency: the sphere in Ilus IV, which could destroy Protomolecule-based networks like the Ilus planetary defense system on contact, and the mysterious sphere aboard the Tempest.

The object's effects on a human observer are highly unusual; whilst inside the object on Ilus, Elvi described herself as being able to perceive increasingly small objects and phenomena, eventually becoming aware of the individual molecules and atoms that composed her body.

According to The Investigator (after being re-manifested by James Holden during the events of Leviathan Falls), the beings responsible for the destruction of the Ring Builders exist within a larger, older universe (or some other form of separate reality) within which the bubble of "normal" spacetime constituting the Slow Zone is embedded. The universe beyond the borders of the Slow Zone exerts a tremendous "pressure" on it, and the Ring Station utilizes the energy of this pressure to power itself and maintain the integrity of the Slow Zone. However, in doing so, the Slow Zone continually leeches energy from the surrounding universe, incurring the apparent animosity of the entities which live within it.

The entities within this outer reality are capable of pushing into the spacetime within the Slow Zone; when this occurs, nearby observers undergo a change in perception, in which objects appear to fragment into diffuse clouds of molecules or atoms while still retaining their general form. The entities are visible amongst these clouds as tendrils of utter darkness, which move effortlessly through "solid" matter and destroy it on contact.

The entities are also capable of interacting with regions outside the Slow Zone, but in a less direct fashion; these interactions manifest primarily as changes to fundamental physical constants (e.g. the speed of light) and result in a variety of effects. The primary objective of these activities is to kill any intelligent life within a star system connected to a Ring Gate, by disrupting key neurological processes. Whenever one of these incursions takes place, a "void bullet" appears somewhere nearby. 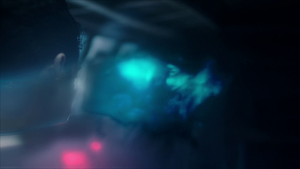 The first depiction of the ring entities as one of them approaches Holden aboard the Rocinante when transiting the Sol Ring in "Abaddon's Gate". 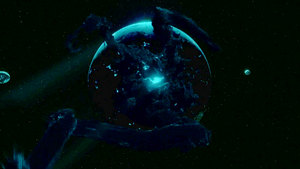 Holden's vision of the ring entities destroying protomolecule on Ilus, from "New Terra". Brightened for contrast. 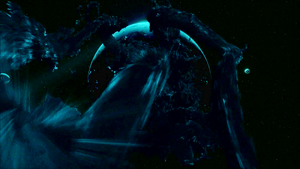 Elvi Okoye falling into the Void Bullet on Ilus, from "Cibola Burn". 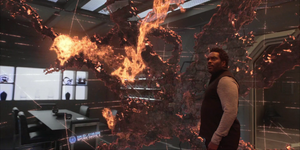 A holographic simulation of what Elvi Okoye saw when falling into the void bullet on Ilus, from "Exodus". 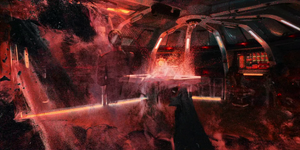 The Barkeith being destroyed by the ring entities in "Nemesis Games". 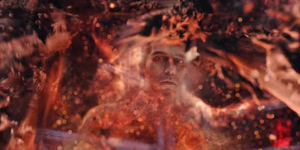