Tungsten Slugs
The Ring Station railguns were a battery of six railguns capable of sustained fire at thirty rounds per minute.[1] Built by the Laconian Empire and supplied to the Free Navy garrison at Medina Station, they would eventually be operated by the Transport Union for the next thirty years.

When the Free Navy was in control of Medina Station during the Free Navy Conflict, the Laconian Empire supplied them with several railguns for defending the Slow Zone from the Sol system powers. Unknown to the Free Navy, Laconia knew that they would not win the war, but intended to extend the conflict for as long as possible. The Laconian ship Proteus was sent to the station to assist in the installation of the railguns. This included keeping a small Laconian garrison directly on the Ring Station. Initial attempts were made to weld the railguns directly onto the Ring Station, but this proved impossible as the surface would not melt. The solution was to tether three beams around the entire sphere; the railguns were mounted at the six points where two beams would intersect.

Beside the main reactor for each railgun is a control bunker possessing heavy weapons and at least two dozen guards. Each also has at least four RPG launchers and heavy machine guns

Upon the Third Battle of Medina Station, the Laconian battlecruiser Heart of the Tempest fired its USM field projector weapon against Ring Station and completely destroyed the railguns.

The base of each railgun was ten meters across, built in a rough hexagon, and massing more than a small ship. The railguns were mounted on three wide belts of ceramic, carbon-silicate lace and steel. Two of these belts ran parallel whilst the third ran across them at a ninety degree angle.

The railguns unlike previous one were not made of titanium and ceramic, but of new materials received through the Laconia gate. Their carbon-silicate lace plating was iridescence, whilst both the power cores and friction-less ammunition feeds were described as being "strange".[2]

At the base of each rail gun are eight vents, designed to vent the “plasma armature” that propels the railgun slug. The plasma is vented into the hexagonal magnetic shield on the ground side of the weapon, and into Ring Space on the opposite side. The large flashes seen during Ring Station attack sequence are caused by this vented plasma. 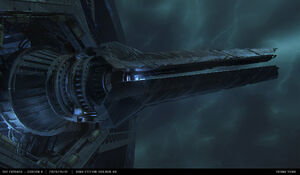 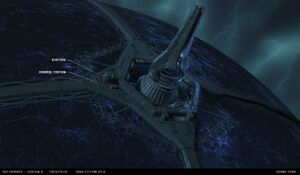 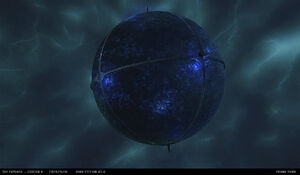