The Rocinante ("Roci") is a Corvette-class light frigate with multiple roles, such as torpedo bomber and boarding party insertion.

Originally commissioned as the MCRN Tachi  (ECF 270), the ship was stationed onboard the MCRN battleship Donnager. It was renamed by James Holden after he and his crew used it to escape from the Donnager.

The ship's construction is like a narrow building, layered floor by floor from the drive cone and reactor up to the engineering deck, to the machine shop, then the galley and crew cabins and medical bays, storage deck containing the crew airlock, then on up to the command deck and pilot's farthest forward. Under thrust, g-forces then provide a "down" amenable to human orientation.

Her normal crew complement was over a dozen navy personnel and officers, and on many missions she'd also carry six marines.

Originally commissioned as the MCRN Tachi, the Corvette was one of Donnager's original assigned escorts when the McCabe and Valenza were replaced with 4 of the new Morrigan-class to improve the battleship's area of control. By the time the Donnager picked up the Canterbury survivors, the Tachi was the only escort docked in the battleship's hangar bay.

Once Donnager was boarded in a CQB scenario, Captain Yao ordered Lt. Lopez and some MCR Marines to escort Holden and the other survivors to the Tachi, hoping they would escape and testify that the Martians had nothing to do with the Canterbury's destruction. The bay, however, was swarming with enemy boarders. Amos Burton and Lopez were wounded and the Marines were killed, but Alex Kamal, previously an MCRN pilot, took control of the gunship. Using her PDCs, the Tachi blasted her way out of the hangar and made a getaway at full burn before the Donnager was scuttled.

Once away, the Canterbury survivors received a message from the OPA spokesperson Fred Johnson offering a safe harbor, something that would be hard to find elsewhere as anyone flying a stolen Martian warship would be highly suspect. He also instructed them on how to change the Tachi's transponder codes to avoid long range detection. Alex enthusiastically suggested naming their new ship "Flamin' Alamo" or "Screamin' Firehawk" to which Holden refused, suggesting the name "Rocinante" instead. Amos agreed, saying a woman named "Rocinante", Spanish "workhorse", had once been good to him. It is later revealed Holden thought indeed of the horse of Don Quixote. With its new name, the Rocinante headed for Tycho Station.

Upon arrival, a brief hostility ensued as it turned out that Johnson planned to commandeer Rocinante for a mission, as he wanted a capable warship in case whatever happened to the Scopuli happened again, but Holden convinced him to hire them to undertake it. Johnson then had the ship disguised as a gas hauler to help them avoid detection and gave the Rocinante's crew their mission; to find Lionel Polanski, one of Fred's operatives from the Scopuli.

Not long after getting underway, the Rocinante got spotted by a Martian patrol boat, the Yangste. Despite Alex's best efforts, the Martians approached to board, which would have meant grave consequences once they recognized the stolen warship. Fortunately, Kenzo Gabriel (who had just been caught sending out a rogue signal) informed the Roci's crew that, being a Martian gunship, there would be secret codewords for when they were working covert ops and needed to be left alone, which Alex confirmed with an incident he witnessed involving communications including the words "donkey balls." Managing to locate the codewords in time, the MCRN ship was satisfied and left the Rocinante alone.

Arriving at a lone asteroid, the Rocinante encountered a seemingly inactive stealth ship, found to be the Anubis and the Cant's killer, bound for Eros from Phoebe but never arrived. Docking with an umbilical, Holden, Naomi, Amos, Kenzo, and one of the Roci's drones searched the ship and discovered the Protomolecule at work throughout the ship. Finding that Lionel had escaped in a shuttle, Holden ordered Alex to destroy the Anubis with a torpedo, which Alex did gladly as the Rocinante now made its way to Eros.

The Rocinante escapes from Eros but loses its gas hauler disguise to detach itself from the claws holding it in place.

In the Assault on Thoth Station, the Rocinante was released from the OPA Guy Molinari to act as broken off cargo so it could float to the station. As it neared, the station's defending stealth frigate launched missiles at the Guy Molinari but the Rocinante intercepted them and then the two ships engaged in PDC fire as they neared each other. The Roci then quickly hugged the habitat ring of the station as protection from the Stealth Frigate. Eventually, the Roci moved over the habitat ring to attack and destroy both the Stealth ship and an anti-asteroid canon which had destroyed one of the breaching pods.

When Eros moves on its own, the Rocinante chased after it and eventually is used to target lock the asteroid for UN missiles to destroy it. The Roci is then forced to consistently increase its speed to match Eros, endangering the crew in the process. Eventually, Miller convinces the crew to slow down and stop its pursuit of the asteroid.

The Rocinante goes after the Hybrid to destroy it but holden gives up to go protect the Weeping Somnambulist from being blown up over Ganymede and escorts it to safety. The crew then discovered that the Hybrid had gotten onto the ship's cargo section. Holden and Amos try to remove it from the ship but Holden is trapped by a cargo container. The crew eventually manages to get the Hybrid out of the ship where Alex destroys it with the Roci's fusion Drive.

Following the attack by the hybrid, Holden, Alex and Amos are outside the ship burning off traces of the protomolecule from the hull. Naomi tells him that the reactor shielding is intact and nothing critical was damaged. Prax is working on the cargo bay shield. After Holden learns that Earth and Mars are at war, Holden wipes the name Rocinante, as well as the lady, off the hull. Naomi asks Prax for a new name for the ship's transponder, renaming the ship to Pinus Contorta.

When the crew of the Roci receive a distress signal from the Razorback. Which has Deputy undersecretary Chrisjen Avasarala who and Martian Marine Bobbie Draper who are being chased to be assassinated by a UNN Leonidas-class battleship. The Rocinante reaches them in time to destroy the Battleships missiles with its PDC's which blinds the battleship. The Roci uses this to move directly past the battleship and fire two missiles into its engines sheering two of them clean off and disabling the UNN ship. The Rocinante then docks to the Razerback to help its crew.

Mars sues Rocicorp in both Martian and Earth courts to get the Rocinante back from the Roci Crew. To pay their legal fees, the crew agree to take a film documentary crew to the Sol Ring.

Once the Seung Un is blown up, a false broadcast pins this attack on James Holden. The Rocinante is unable to respond to the false information with it being compromised from software installed by the cameraman Cohen, which disabled the ship's communication system. Fearing no way out, Holden tries to contact Proto-Miller, who informs him of how to enter the Ring safely. Then the Behemoth fires upon the Roci, but it goes to the ring and does a flip and burn at full speed. Fortunately, the ship and crew survive when entering into the Ring Space, becoming the first to do so.

Eighteen months after the Ring Space incident, the Roci has gotten a new black and red paint job for its outer hull. The lawsuit from Mars has since been dropped thanks to Chrisjen Avasarala's help. When the crew are sent on a mission to Ilus, the Roci goes to Luna to get modified with landing gear and to get installed with a railgun. Upon arriving in the orbit of the planet, the Roci successfully lands on the surface of Ilus.

As Naomi and Lucia Mazur try to get to the Rocinante, Murty Ambushes them and pins them from reaching the ship. Holden however reaches them in time and uses the Roci's PDCs to get them to onboard the ship. Once secured, Naomi, Alex, with Lucia launch from he surface of Ilus to get Lucia away from Murty.

After all fusion reactors stop working over Ilus, the Rocinante has to save the Barbapiccola from entering the planet's atmosphere. To do so, the crew come up with the idea to attach both ships together and the Roci using its thrusters to keep the Barb in orbit. When attempting it, the Edward Israel launches its shuttle as a bomb but Alex manages to destroy it. This forces Alex to use the Roci's rail gun to keep the Barbapicolla in Orbit. They are then saved when Holden shuts down all protomolecule on the planet, allowing every ship's fusion drive to work again.

Alex Kamael reactivates the Rocinante's fusion reactor and target locks the Edward Isreal so Alex can have a talk with its crew. When Alex is contacted by Holden, the Roci lands where Holden is and picks up the crew and in custody prisoner Murtry to head back to the Sol system.

Following the Rocinante's return to the Sol system, it arrived to Tycho Station where it docks to go through major repairs for some time. Chief Engineer Sakai tells Naomi that the ship has major stress fractures and metal fatigue all over the ship following the use of the Roci's railgun to stay in orbit around Ilus.

Naomi, while captive aboard the Pella, discovers that the Rocinante has been sabotaged and is able to distract Cyn in order to use his hand terminal so as to warn Holden just in the nick of time. With the sabotaged stopped, Holden Bull, Monica Stuward, and Leveau leave Tycho station to pursue the Zmeya.

When Zmeya discoveries the Rocinante pursuing it, the two ship turn on the their Epstein Drive as the Roci tries to capture the Zmeya. As the Roci appoaches the Free Navy ship, the Zemeya launches a barrage of missiles at the Roci. The Roci is able to take out a few missiles and then has to a roll to take out all the Zmeya missiles with PDCs. When all the missiles are taken out, Holden activates the Roci's rail gun and takes out the Zmeya's drives. As the Roci prepares to board the Free Navy ship, the Zmeya explodes. 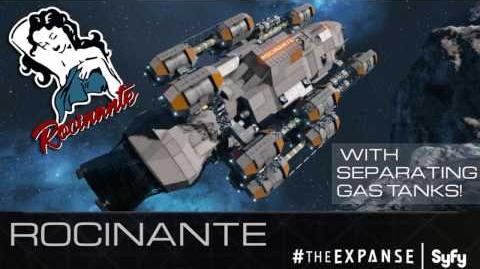 Retrieved from "https://expanse.fandom.com/wiki/Rocinante_(TV)?oldid=69250"
Community content is available under CC-BY-SA unless otherwise noted.