Rock Bottom is the sixth episode in the first season of The Expanse. It premiered on January 12, 2016 on Syfy.

On Earth, Chrisjen Avasarala asks her ex-colleague Carlos Davila for access to his spy on Tycho Station in order to keep an eye on Fred Johnson. When Davila refuses, she persuades him with talk of his imprisoned son, Esteban, who's up for parole.

After Davila goes crying to him, Errinwright disciplines Chrisjen for her actions. Chrisjen insists she only "politely asked" Davila about spying on Johnson, whom she considers to be a potential threat due to him building the Nauvoo, the "largest spacecraft in history" … and the fact that he's OPA. Errinwright points out that the OPA killed Chrisjen's son and Johnson turned his back on Earth … is she sure this isn't a personal vendetta? "Of course it's personal," she replies, after which Errinwright gives in and grants her permission to use Davila's spy.

Speaking of Fred Johnson, he's given the crew of the Rocinante safe harbor on Tycho Station … though he's somewhat taken aback when he discovers that he's harboring James Holden, the poster boy for all the Belter unrest on Ceres. After some initial tension, Johnson recruits Holden, Naomi, Amos and Alex to find Lionel Polanski, the sole survivor of the Scopuli … a ship that Johnson himself commissioned for an OPA recon mission.

Johnson's crew disguises the Rocinante as a simple gas freighter and the gang is off on their rescue operation … whilst Johnson retrieves some sort of data cube found on the body of Lt. Lopez.

Elsewhere in the Belt, we catch up with Diogo, the "gutter punk" whom Miller busted for stealing water on Ceres earlier. He's assisting his bitter, cranky Uncle Mateo, a working-class 'rockhopper' who explores asteroids looking for precious ore.

Soon, their ship, the scrappy Xinglong, is intercepted by the MCRN Scipio Africanus, a Martian border patrol vessel. Mateo is busted for an expired transponder and ordered to impound his haul.

Enraged by how Martians treat Belters, Uncle Mateo kicks Diogo off the Xinglong and goes after theScipio Africanus. "A man has to stand up!" he drunkenly exclaims as he unleashes his haul of rocks upon the Martian ship, pummeling it with an impromptu asteroid field. The Martians destroy the Xinglong as Diogo is left floating in space, hoping that someone will find him.

Back on Ceres, Miller is being interrogated and tortured by Anderson Dawes, who demands to know what the detective knows about Julie Mao. During their "talk," Dawes tells the tale of his sickly younger sister, whom he had to leave for dead in order for the rest of his family to survive. Disgusted with what he perceives to be Miller's lack of loyalty to his own people, Dawes leaves him to be murdered by his two goons … though luckily Octavia Muss comes to the rescue.

Based on the information on the data cube he found in Julie's mechanical hamster, Miller presents his now rather epic conspiracy theory about the disappearance of Julie Mao, which involves some sort of bioweapon that was being developed on Phoebe Station. Captain Shaddid rewards his impressive detective work by firing him. "Dawes got to you, too," Miller snarls as he's escorted out of the Star Helix offices by security.[1] 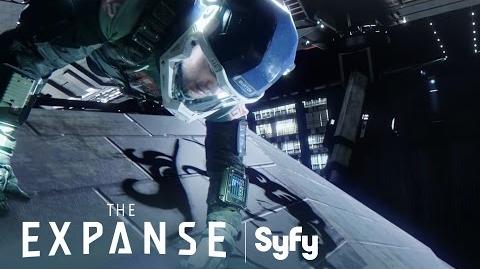 THE EXPANSE Inside The Expanse Episode 6 Syfy 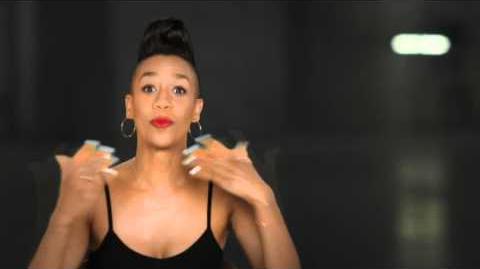 Inside The Expanse - Episode 6 THE ZONE SKY TV