Were you looking for the term, Salvage?

Salvage is the eighth episode in the first season of The Expanse. It premiered on January 26, 2016 on Syfy.

The crew of the Rocinante discovers a derelict vessel holding a secret that may destroy humankind. Holden and crew are led to Eros, where they finally cross paths with Miller, only to make a horrifying discovery. On Earth, Avasarala receives devastating news.

Things are getting tense at the U.N., as Errinwright has sent a black ops team to Tycho Station to investigate Fred Johnson's alleged stealth tech program … and plans to take out Holden via "random street violence" at Eros Station. As if that isn't enough to deal with, Chrisjen receives word that her friend and colleague, Franklin DeGraaf, the former Ambassador to Mars, took his own life.

Meanwhile, Miller's on the flight to Eros, where his uneasiness over his first time in outer space is noticed by a Mormon gentleman who is set to be a passenger on the Nauvoo. Miller wonders how he can embark on a 100-year journey to a destination that might not be all that he'd hoped for, to which the Mormon replies, "True faith is a great risk." Miller realizes his own journey to Eros to find Julie Mao is based on faith … and thinks, with all of the ever-increasing unrest between Mars, Earth and the Belt, the Mormons might be getting out at just the right time.

Miller arrives at Eros Station, where he discovers that the Anubis 1A is registered to a "Lionel Polanski" (remember, "Lionel Polanski" is the survivor of the Scopuli that Holden and crew were sent by Fred Johnson to retrieve). Unfortunately, Miller's aggressive persuasion tactics utilized to get this information from the dock master lands him in the slammer, from which he's bailed out by his old friend and colleague, Inspector Sematimba. After 'Semy' sees just how dedicated Miller is to his dangerous cause, he gives him some new information: "Lionel Polanski" is the name Julie Mao used when she registered the Anubis 1A, and she's currently a guest at the Blue Falcon Hotel. Miller thanks his friend and is off …

Meanwhile, the Rocinante has arrived at Charted Belt Asteroid BA-834024112, where the crew finds an abandoned stealth ship … one that looks a lot like the one that "killed the Cant." Upon exploring the vessel, Holden and the gang discover that this is the Anubis, which, according to the navs, was headed for Eros … from Phoebe Station, where Lopez had found everyone dead.

And, per the blood on the airlock door, it's the ship on which we saw Julie Mao before we met any one else.

Speaking of earlier … remember that glowing blue electrical spore-thing that Julie found in Engineering? Yeah, it's still here, though in a semi-dormant state thanks to the ship's power being turned off. When Amos turns on the juice, it starts getting aggressive, prompting a quick return to the Rocinante … and destroying the Anubis via torpedoes. "Remember the Cant," Holden says as he watches the mighty ship go up in a nuclear fireball.

The next stop for the Rocinante? Eros, where Holden figures they'll find this "Lionel Polanski." Worlds collide in the lobby of the Blue Falcon Hotel, where Holden and the gang are ambushed by thugs, actually a black ops team that Errinwright dispatched, and are rescued by Miller!

Miller, Holden, Amos, Naomi and Alex go up to Room 22, where they're greeted with a horrible stench … and blue-brown fungus-like tendrils in the bathroom. Upon investigating the shower stall, they find the body of a young woman. Coils of fungal growth spill from her mouth, her ribs and spine have grown spurs like knives, and spiky structures stretch from her back and throat, climbing the wall behind her. 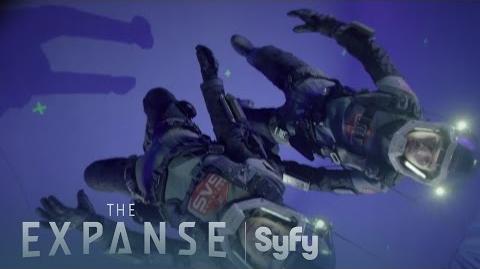 THE EXPANSE Inside The Expanse Episode 8 Syfy 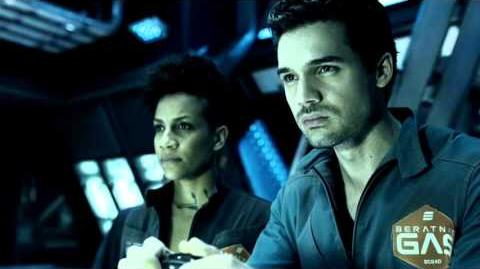 Inside The Expanse - Episode 8 THE ZONE SKY TV