The Expanse Wiki
Register
Don't have an account?
Sign In
Advertisement
in: Female, Characters, Female Characters,
and 9 more

Sandrine Kirino was an Admiral in the Martian Congressional Republic Navy (MCRN). During the UN-MCR War, she held the rank of Captain and was the commanding officer of the MCRN Hammurabi.

Kirino grew up on Mars, and it is possible she hails from a military family, as her sister also served in the Martian Congressional Republic Navy. At the time of the UN-MCR war, she had achieved the rank of Captain aboard the Hammurabi.

Kirino is shown to be composed, steadfast and reasonable. She is very capable at her job, displaying a keen ability with wartime tactics, but is also shown to be much more level-headed and empathetic than most officers of her rank, as she places the lives of her soldiers above all else and even risks defeat in a decisive battle to give peace a chance. Unlike many other Martians, particularly those in the navy, Kirino doesn't seem to hate Earth and even asks Sinopoli his opinion of Avasarala, smiling when he said that he liked her. Her choice to hold the Martian fleet's fire, as well as to offer a truce to United Nations Navy (UNN) ships in need of assistance during the Io Campaign, was crucial to ultimately achieving peace between the governments of Earth and Mars.

In "Triple Point", Following the recovery of crewmen Sinopoli, Loftis, and Ranhofer from the damaged remains of the MCRN Kittur Chennamma, Captain Kirino speaks with Ensign Sinopoli aboard the Hammurabi. Sinopoli recounts his experience aboard the Rocinante, and how despite his efforts to take the corvette by force, they were still aided by James Holden in repairing the Chennamma—the "KC"—to return to a Martian fleet. Sinopoli shows Kirino the message he was given by UN Deputy Undersecretary Chrisjen Avasarala—with which she asked him to send to her Commanding Officer and to Admiral Michael Souther of the UNN—that demonstrates Errinwright's treason, although both Kirino and her executive officer, Lieutenant Durant, are skeptical of the message's veracity.

Nonetheless, the new intel draws Kirino's attention to the UNN Agatha King, the flagship of the UNN's Jupiter Fleet, which has diverted its course to Io. Puzzled at the decision to divert from Callisto—a strategically significant asset—Kirino orders the Hammurabi to intercept the dreadnought. This consequently sees both wartime fleets of the UNN and MCRN on intercept courses over Io.

Confronted with the bizarre actions of the Agatha King, Kirino contacts UNN Admiral Souther in secret, sending Errinwright's message—the proof of his treason and the evidence of an illegitimate war—directly to him. Shortly before entering the area of operations over Io, Kirino slows the Hammurabi's approach and requests for Sinopoli's presence at the bridge; Durant realizes that Kirino has sent the message to Souther, countering that it could be considered treason. Kirino explains to him that, both fleets, 74 ships in total with thousands of sailors, are about to achieve nothing more than mutual annihilation. She also explains to him that "war is by nature an inherently unstable interaction of three things: intense emotions, politics, and luck". She regards Errinwright's message as luck, which may pave a path to avoid the carnage.

Kirino is proven vindicated when Admiral Souther and his lieutenants mutiny against commanding UNN Fleet Admiral Augusto Nguyễn, briefly relieving him of duty on a charge of conspiracy to wage an illegal war. After the munity fails, open combat erupts between Souther's and Nguyễn's loyalists; Captain Kirino, having witnessed the UNN fleet falling into a state of civil war, orders the MCRN fleet not to engage any UNN vessel, for if they did, they would unite against the Martian aggressors. Kirino later contacts the UNN ships, offering a truce and assistance to any who needed it.[1]

In "Immolation", Following the launch of the hybrid pods launched from Io by Admiral Nguyễn, Captain Kirino orders her ship to open fire on the weapons. One of the pods hit by the Hammurabi's PDCs collides with Agatha King, sealing the fate of the UNN ship.[2] In "Delta-V", Kirino's ship was later part of the joint UNN, OPA and MCRN fleet sent to investigate the Ring megastructure that the protomolecule constructed in orbit beyond Uranus. When Manéo Jung-Espinoza approached the ring in his racing ship "Y Que" intending to fly through it, the Hammurabi warned him to vacate the area or be fired upon.[3]

In "Force Projection", Sandrine Kirino, now an Admiral, is the Martian liason to UN Secretary-General Chrisjen Avasarala during the Ceres Offensive of the EMC joint fleet, while aboard the UNN Zenobia bridge. When their fleet arrives to the station with no Free Navy presence, Krino notes to Avasarala how this is likely a trap by FN forces. Later, when Avasarala is interrogating Cere's chief administrator Nico Sanjrani, she tells the Scretary General that her fleet has trained interrogators that can squeeze out more informatin from the Belter leader. Avasarala agrees but with the conditions of having a UN representative present and no coercive methods to be used. Kirino says they don't use coercion since they don't have to. Afterwards, she leaves the Zenonia's brige.

In "Redoubt", Admiral Kirino is on the Zenobia's bridge with Chrisjen Avasarala as they watch a speech Sanjrani is giving to the Belters of Ceres following the explosion that hit the station's docks. When Gareth and Avasarala discuss how Belters are in denial about the explosives being placed by Inaros, Kirino tells them they are a navy and not a police force. Avasarla feels they will need Belter allies, but Kirino is more focused on how many lives were lost, both in the ranks of the UN and Martian marines. She questions if they should stay on Ceres and instead proposes the UNN and MCRN join forces to send a strike force and take back the Sol Ring and Medina Station. The Secrtary General declines her offer, as she beleives that is exactly what Marco Inaros wants. After Avasarala is gone, Kirino informs MCRN fleet command that the UN will not support the Medina Strike, and then receives a message back that they are repared to go alone.

In "Why We Fight", Six MCRN ships led by Admiral Kirino ambush and destroy the Free Navy ships guarding the Sol Ring. As they transit the Ring and burn towards Medina Station, Kirino sends out a wide-beam message that their weapons are locked on to the Medina and demands an unconidtional surrender, threatening to open fire otherwise. As Kirino gives out the order to use missiles to hit the station, clarifying to use plasma instead of nuclear so as to avoid activating the Slow Zone's defenses, she is informed of the railguns built onto the Ring Station. When her ships start being taken down by the railgun fire, she orders for emergency evasive maneuvers. She is unable to finish her commands as her ship is destoryed by a railgun hit, killing her in resulting explosion. 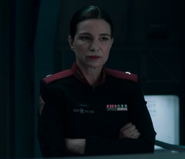