The Scirocco-class assault cruiser[1] is a prolific class of Martian Congressional Republic Navy (MCRN) assault cruiser. Designed as a high-speed troop carrier and frontline warship, several ships of this class were in service during the UN-MCR War and in succeeding conflicts including the Slow Zone Incident and the Free Navy Conflict.

At 200 meters long, with a sleek, narrow, and angular hull, ships of these class are driven by four powerful RTF-B series Epstein drives, ensuring great maneuverability and acceleration.

Their ventral bays can hold up to three Chariot-type dropships ready for rapid deployment of up to 36 Martian Marines at once. As such these ships often contain squads of the venerated Force Recon Marines equipped with Goliath Powered Armor onboard. Sciroccos are also equipped for boarding assaults with 12 single-occupant Mosquito-type breaching pods (six on each of their port and starboard sides) and multiple grappling cannons to latch onto a target.

Their electronics are no less impressive than her gunnery, featuring only the best targeting suites, ensuring maximum PDC efficiency, railgun accuracy, and torpedo impact probability. Sciroccos are also equipped with electronic countermeasures, further bolstering her anti-torpedo defenses, and advanced communication and tactical arrays. These make them able to function as a mobile command center.

Fast, adaptable, powerful, and equipped for any role, anyone should see the Scirocco as a viable threat to watch out for. 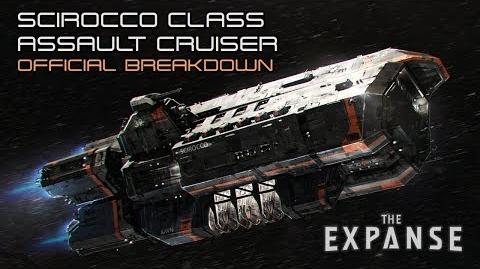 Retrieved from "https://expanse.fandom.com/wiki/Scirocco-class?oldid=73615"
Community content is available under CC-BY-SA unless otherwise noted.