The Slow Zone Incident was a crisis that took place in Ring space encountered by an expeditionary fleet of the UN, MCR and OPA, following the activation of a Ring gate and the end of the UN-MCR War.

The Eros incident was an event in the Solar System in which the civilian population of the asteroid Eros were subjected to exposure to the Protomolecule as part of a science experiment and conspiracy conducted by Protogen. As the Protomolecule absorbed biomass, it began to move the asteroid - defying all know laws of physics - heading on a colission course with Earth. Due to the intervention of the crew of the Rocinante - in particular Josephus Miller - the asteroid's course was diverted into impacting on Venus. While initially thought to be the end of the crisis, science ships surveying the impact crater from orbit would soon note that Protomolecule activity was continuing on the uninhabitable planet. In an attempt to secure more information ahead of their Martian counterparts, the UN science vessel Arboghast would begin to descend into the atmosphere of Venus to deploy probes and get a better look at the site, resulting in the ship being dismantled by the Protomolecule for reasons unknown.

At the climax of the UN-MCR War, the eyes of the system would turn to Venus in time to see a massive Protomolecule structure rise off the planet, heading to the outer edge of the Solar System and forming a gargantuan ring structure. For 187 days, UN and MCRN vessels would burn towards the edge of the system and establish a quarantine around the structure in an attempt to discern its purpose. However, it would not be until the slingshot racer Y Que broke the flight restrictions and attempted to slingshot through the ring that the structure would activate, killing the racer's occupant near instantaneously through high deceleration.

Destruction of the Seung Un and crisis[edit | edit source]

With the ring now active, a civilian delegation was sent by the UN consisting of religious, scientific and other cultural representatives of the UN to investigate the structure aboard the UNN Thomas Prince. Meanwhile, an OPA fleet consisting of the flagship Behemoth - formerly the generation ship Nauvoo - would also be sent to the ring as a display of OPA power, captained by Camina Drummer as a representative of Fred Johnson, while Klaes Ashford would be appointed as executive officer as a representative of Anderson Dawes. In addition, the private contractor Rocinante would also travel to the ring due to a documentary on Jim Holden being created by Monica Stuart.

Tensions would remain elevated around the ring, with the UNN and MCRN fleets having only six months prior been at war with one another, and the OPA fleet joining without invitation by either power. Following the foolhardy ring activation by Belter slingshotter Manéo Jung-Espinoza abord the Y Que, the OPA would only be viewed with more suspicion.

Despite this, tensions would not be truly inflamed until the unprecedented destruction of the UNN logistics vessel Seung Un. While it was quickly determined that the vessel was neither destroyed by a ship-mounted weapon or a reactor meltdown, blame would be placed on the OPA following the broadcast of a message, seemingly by Holden, claiming the ring for Belters and the OPA alone. Due to foul play by Clarissa Mao, seeking revenge on Holden for his part in bringing down her father and family in the war, the message was in fact a fake planted in the Rocinante, with further sabotage locking the crew out of the frigate's ability to cancel the message broadcast or activate defenses. With UN ships preparing to fire on the Behemoth due to a believed OPA act of aggression, the Behemoth fired a torpedo at the Rocinante in a public disavowment of Holden and his broadcast. With no defenses and being unable to outrun a missile, Holden ordered the Rocinante to head into the ring to escape the missile, thanks to advice presented by The Investigator.

The Rocinante was soon followed inside the ring by the MCRN Xuesen with the cruiser deploying two probes to investigate the curious space the ships had found themselves in. The first accelerated wildly, being brought to a halt upon reaching a velocity just over 18,000KPH, while the second was destroyed by forces unknown as soon as it attempted to go behind the ring. While the Xuesen's weapons were null due to the speed limit in place, the Rocinante was caught between a rock or a hard place, as the cruiser's Dropships reaching the Rocinante would cause the formerly-Martian frigate to be taken back by the MCRN while continuing to the other side of the sphere space would end in total destruction.

Seeing the Xuesen enter the ring and determining not to be outdone, the OPA fleet soon followed the MCR inside the Slow Zone, taking the Behemoth to investigate the alien structure first-hand. The OPA ship would enter the ring space, followed in short order by their UNN counterparts. To find answers about the ring space they were in, Holden would depart the Rocinante at the behest of the Investigator to journey to the space station at the heart of the sphere and find answers - however, a dropship launched by the Xuesen would carry a fireteam of Martian Recon Marines - including Bobbie Draper - to apprehend the believed-terrorist for questioning and interrogation. Holden would land on the station succesfully though with the marines not far behind, leading to a confrontation inside the structure.

With Holden acting on the instructions of the Investigator, he proceeded to "unlock the evidence room", providing him and the Investigator both with information about the civilisation that had constructed the Protomolecule and the Slow Zone. The marines would fire at Holden due to his uncooperativeness, with the bullets simply caught by the Slow Zone for exceeding the speed limit of the space. To prevent Holden's actions, Paolo Mayer would attempt to throw a grenade instead, with the station reacting violently to this attack by reducing Mayer down to his component elements to repair itself, then using the thrown grenade's velocity as a new speed limit for the area, forcibly capturing any ship or object travelling faster than 28.997 metres per second - unfortunately, this included every single vessel in the Slow Zone, many of which were travelling at velocities orders of magnitude higher than the new speed limit.

As a result, the ships now caught by the Slow Zone had suffered extremely high deceleration, with hundreds of crew members dying and hundreds more injured as the ships were brought into an inescapable orbit around the station at the centre of the zone.

During the deceleration, Drummer and Ashford were both trapped under a piece of farming equipment held on the Behemoth - a relic of the ship's intended purpose as a generation ship. Unable to free themselves, Drummer sacrificed herself to free Ashford, with Ashford then able to call medical personnel to save Drummer, though at the expense of being paralyzed from the waist down. With all the ships in the space trapped in orbit and escape impossible, Ashford made the decision to spin up the Behemoth's drum, allowing it to provide centrifugal gravity to all in aid of medical assistance.

The Behemoth would become the base of operations for a joint-cooperative effort between OPA, UN and MCR forces trapped in the Slow Zone as they best figured out how to escape or call for help. Any skiff launched to head back to the Sol System would take upwards of seven months to reach the ring, and interference meant that no signal - not even one transmitted using the communication array of the Behemoth - would be able to reach the Solar System.

Holden would see visions of the Ring Civilisation using the station in the Slow Zone to burn entire solar systems, before being knocked out and captured by the remaining marines. He would be interrogated by Mars and again by Ashford, repeating his findings to little success before being placed in the Behemoth's brig. As part of attempts to study the Slow Zone, UNN scientist Kolvoord would suggest a plan in which a probe would detonate a nuclear warhead, allowing them to get readings about the Slow Zone's containment field as it acted on the matter ejected in a nuclear explosion. This explosion would trigger a threat response from the station, with it beginning to charge up like a railgun with the intent of defending itself. With the Slow Zone preparing to destroy the Solar system, Ashford ordered that the Behemoth's extraordinarily powerful laser transmitter be converted into a directed energy weapon (DEW) capable of firing on and destroying the Ring; those trapped inside the Slow Zone would be permanently trapped and never heard from again, but the greater human species would be saved from extinction.

However, Holden would instead be told by the Investigator that a laser attack would be ineffective, and only inflame the station defenses even more. Instead, the solution to the problem facing humanity was to stop the station seeing the fleets in the area as a threat by getting them all to turn off their reactors - with no potential threats around, station security would go off high alert and release the ships trapped in orbit. With Ashford's modifications to the laser in progress, Holden and the crew of the Rocinante would use pastor Anna Volovodov to make a transmission to all the ships in the area, pleading them to turn off their reactors while Holden, Drummer - now able to walk with help from an improvised mech suit - and Naomi headed to the reactor to shut down the Behemoth's power grid. Martian marines lead by Draper would be sent to shut down the broadcast while OPA soldiers led by Diogo Harari, clad in stolen Goliath Powered Armor, would be sent to stop Holden. Bobbie would ultimately defect to the crew of the Rocinante, fighting against her fellow marines to prevent the broadcast from going ahead while Diogo would be killed by Naomi.

Holden would eventually be succesful in this endeavour, with all spacecraft in the Slow Zone shutting off their nuclear reactors and the quarantine lifted, with a network of rings opening up leading to 1300 potentially habitable star systems. 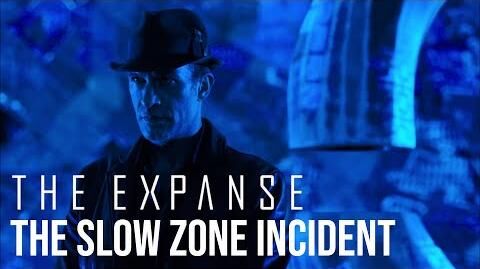 Retrieved from "https://expanse.fandom.com/wiki/Slow_zone_incident_(TV)?oldid=69631"
Community content is available under CC-BY-SA unless otherwise noted.