The Expanse Wiki
Register
Don't have an account?
Sign In
Advertisement
in: Pages with reference errors, Rings, Sol system,
and 3 more

The Sol gate, also known as Sol ring or simply "the Ring", is a ring-shaped megastructure with a rough diameter of 1000 km; it is in a stationary position roughly 2 AU outside the orbit of Uranus[1]. It was created by the protomolecule out of the remnants of Eros Station, having departed Venus after incubating in Eros' impact crater for some time.

The Ring is a wormhole gate, existing as a part of an ancient network built by an alien civilization many billions of years ago. It connects the Sol system to this intragalactic network and to some 1,372 other systems[2] in the galaxy—many of them with habitable planets—thus bringing humanity the newfound abilities of interstellar travel and colonization. The Ring is among the most highly contested structures in the Sol system given its immense strategic and economic potential, with control of it shifting between the United Nations-Martian Congressional Republic Coalition and the Free Navy.

Immediately following the death of a protomolecule hybrid by MMC Gunnery Sergeant Roberta "Bobbie" Draper on Io, the mass of protomolecule that had been incubating on Venus erupted from the surface, heading away from the Sun. This event was captured by many ships near Venus and broadcast across the system, to the surprise, awe, and fear of many.[3]

This mass of protomolecule halted at a point roughly 2 AU outside of the orbit of Uranus, and formed itself into a ring-like structure that was quickly dubbed "The Ring" by many across the system. Soon after, the United Nations commissioned a Blue Ribbon panel—comprising mainly of civilian scientists and academics—to observe and study the Ring. Outer Planets Alliance figureheads Anderson Dawes and Fred Johnson jointly announced an OPA mission to study the Ring shortly after, and a Martian mission was also commissioned as well. James Holden and the crew of the Rocinante would also join the joint-faction flotilla to study the Ring, traveling alongside the UN fleet.

As the official mission to the Ring progressed, Manéo-Jung Espinoza, a young slingshotter from Ceres, attempted to pass through the Ring with his ship, the Y Que, in order to impress his crush, Evita Jung. Reaching the Ring before the flotilla, Espinoza flung his ship through the Ring at high speed, only for the Ring to abruptly activate and halt his ship's momentum entirely. The immense deceleration instantly killed Espinoza, and his ship was pulled into the Ring, now awash with blue light.[4]

Following Clarissa Mao's broadcast of a faked message from James Holden proclaiming the Belt's supremacy over the ring and claiming responsibility for the bombing of a UN supply ship, the Rocinante is fired upon by the OPAS Behemoth. With the Rocinante's core systems disabled through sabotage, the ship faces destruction as Holden pleads for a protomolecule-projected Miller's advice. "Miller" warns Holden to not enter the Ring too fast, and Holden orders the Rocinante into the Ring, with a massive deceleration to slow the ship down. Moments away from the ship's destruction from the Behemoth's torpedo, it successfully enters the Ring, which stops the torpedo—which had been moving significantly faster—dead in its tracks.[5]

In pursuit of the Rocinante, the MCRN Xuesen enters the Ring, launching several probes to test the boundaries of the slow zone. The Behemoth transits the Sol gate at a later point as well, along with its many escort craft.[6]

With the UN's civilian Blue Ribbon panel removed due to the bombing of the Seung Un, the UNN Thomas Prince transits the Ring along with the combined UN flotilla.[7]

As the Ring Station's energy output continues to grow, worries intensify about what it means for Earth and humanity. Klaes Ashford, acting captain of the Behemoth, is convinced that it poses an imminent threat to Earth, and thus orders the Behemoth's communications laser to cut the Ring apart; this would seal them off from Earth, but hypothetically guarantee Earth's safety. The ploy, however, fails; despite this, quick intervention from Holden and Clarissa Mao successfully powers down the Behemoth, convincing the station they are indeed not a threat. As such, the station accordingly powers down. Following this, the ships in the slow zone re-transit the Sol gate, returning to the Solar System.[8]

With the establishment of a joint UN-MCR blockade at the Sol gate, an attempted blockade run from several Belter ships was met with heavy weapons fire. The defending Earth-Mars Coalition (EMC) Ring gate fleet fired upon the transgressing Belter ships with railguns and PDCs, chasing the blockade runners into the Sol gate. Four prospective colony ships escaped through four respective rings, however, including the Ilus/New Terra and Laconia rings.[9]

Upon the request of UN Secretary-General Chrisjen Avasarala, James Holden and the crew of the Rocinante transit the Sol gate for Ilus IV to keep Avasarala updated on its escalating situation. By this time, several communications relays have been established by Medina Station—the former OPAS Behemoth—ensuring communication between both sides of the Sol gate.

The Sol gate was a point of contention between UN Secretary-General candidates Chrisjen Avasarala and Nancy Gao in their debate for the position; Gao maintained that exploration through the Sol gate should be welcomed, while Avasarala kept a more reserved stance.[10]

By the order of UNN Fleet Command, the UNN Tripoli transits the Sol gate to remain inside the slow zone; this action was in response to a United Nations-perceived lack of control the OPA maintained over its assets in the Belt.[11]

With the vast majority of the EMC Ring Gate fleet recalled to their respective planets following the emergence of the Free Navy threat, only three vessels—the UNN Tripoli, UNN Montenegro, and the MCRN Sagarmatha—were left guarding the Sol gate. Free Navy leader Marco Inaros, collaborating with the nascent Laconian Empire, took advantage of this fact, pummeling the defending ships with micro-meteoroids and destroying them entirely in combat. The Sol gate was thus taken over by elements of the Free Navy, who retained ships there to defend it from any attempted attacks from Earth or Mars.[12]

In a move to gain control of Medina Station and Ring space, an MCRN strike force—led by Admiral Sandrine Kirino—destroys two Free Navy ships guarding the Sol gate. Transiting the Sol ring, the Martian ships approach Medina Station, but are quickly destroyed within seconds by the newly-installed Ring Station railguns.[13]

In the climactic battle of the Free Navy Conflict, the Rocinante—alongside a converted ice hauler, the Giambattista—launch an assault on the Ring station to capture the new railguns and neutralize Medina Station. Dropping hundreds of shipping crates with marines hidden amongst them through the Sol gate, the attack is successful, rendering Medina Station harmless and disabling the railguns.

However, in this attack, the railguns are rendered inoperative, leaving the Rocinante with no apparent means of destroying Marco Inaros' incoming Free Navy fleet. Naomi Nagata suggests eliminating Inaros by triggering the Ring entities, and hatch a plan. As the Giambattista self-destructs halfway through transiting the Sol gate, the entities indeed awaken. Inaros and his entire Free Navy—transiting the Sol gate—are wiped from existence, thus ending the Free Navy Conflict.[14] 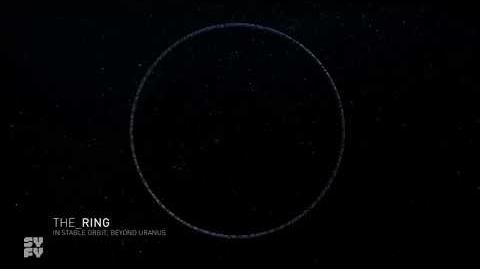 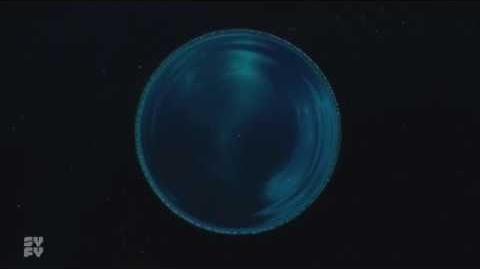