watch 02:03
Wiki Targeted (Entertainment)
Do you like this video?
Play Sound
This article is a stub. You can help The Expanse Wiki by expanding it.

Talissa Kamal was the estranged wife of Alex Kamal and mother to their son, Melas.

Throughout the series[edit | edit source]

Alex receives a reply from Talissa, his wife, telling him that she hadn't heard from him in so long she thought he was dead. She's glad he's not dead but she thinks a real husband wouldn't have abandoned them and his son, Melas, has learned to be without a father. She said it's good he found something that is more important to him but they don't need Alex.[1]

After being pushed away by Amos, Monica Stuart turns to Alex and asks about his family. Alex tells her they still communicate.[2]

alex goes to Talissa's new place to apologize. she calls him out and tells him he doesn't get to know how they're doing. then, she closes the door in his face. bobbie later joins alex at a bar and in a mood she tells alex he should have tried to fix things with his family long ago if he cared.…[4]

Holden mentions that Talissa, now Alex's ex-wife, will be handling the funeral arrangements for him[5] 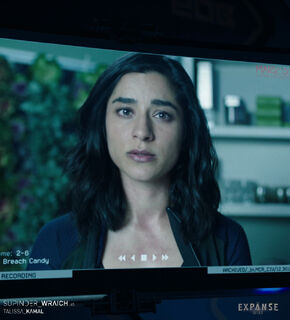 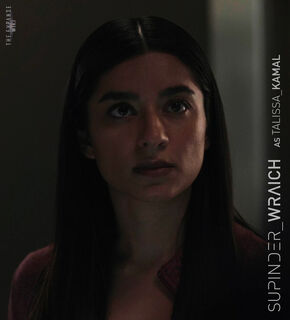 Retrieved from "https://expanse.fandom.com/wiki/Talissa_Kamal_(TV)?oldid=70302"
Community content is available under CC-BY-SA unless otherwise noted.