The Big Empty is the second episode in the first season of The Expanse which debuted on December 15, 2015.

Now's not the time for an emotional response[]

As Holden snaps out of a flashback of the first time he met his now-deceased lover, Ade, debris from the obliterated Canterbury pummels the Knight. Some expert flying from Alex keeps the tiny shuttle from being destroyed, though it takes quite a beating nonetheless.

Once they're clear of the debris field, Holden demands they go after the mystery ship that destroyed the Canterbury. Naomi shuts down the engines to prevent him from doing something rash.

Their situation is pretty grim, as they have a dead radio, only about four hours of oxygen and not nearly enough fuel to get to the nearest space station. With the airlock breached, the outer doors are gone, so they'll have to vent the ship to investigate the outer antenna.

Holden and Amos do a 'spacewalk' in an attempt to fix the antenna as everyone dons spacesuits to be able to breathe on board the ship. Soon, Alex starts going hypoxic, mumbling "Oh My Darling, Clementine" to himself. Shed quickly hooks up breathers to share his oxygen with Alex even though there's not nearly enough for both of them.

Shed ends up passing out as Holden fixes the antenna the old fashioned way: by kicking it. As the cabin is re-pressurized, Holden revives the heroic medic.

The crew then conjures a makeshift amplifier to send a distress signal. During the salvaging, Naomi notices the beacon they found aboard the Scopuli is actually top-grade military tech courtesy of the Martian Congressional Navy, which leads everyone to suspect that Mars nuked the Canterbury.

Their suspicions become stronger when they receive a response to the Knight's distress signal … from a colossal Martian warship known as the Donnager. As the Donnager prepares to jam the Knight's communications, Holden sends a message revealing the Canterbury was destroyed after answering a bogus SOS from the Scopuli, from which they recovered Martian Naval technology. He hopes this information being broadcast will serve as "insurance" and keep them from being killed by their captors.

Miller does a little snooping[]

Meanwhile, on Ceres Station, water rations are in effect due to the Canterbury  being late for its delivery. Detective Miller, whose shower was cut short before he could rinse the shampoo from his hair, infiltrates Julie Mao's apartment, finding a message from her father in which he threatens to sell her racing ship, the Razorback. "It's time to come home," he says. "I'll make everything right again."

After Miller listens to Julie's angry response telling dear old dad that he can't "buy me off or control me anymore," he takes advantage of Julie's water supply being at 97% to fix his bad hair day.[2]

Miller and Havelock then visit the Administrative Plaza of Ceres, where a representative named Joon shows them an area of the gardens where the grass has turned brown. Joon assumes a group of local Belter gangsters known as the Loca Greiga are once again redirecting and stealing the water for themselves. After Havelock challenges what he interprets to be prejudice against Belters and a sense of entitlement that comes with being one of the Ceres elite, Joon presents him with a small potted cactus.

Escorted by an AWP (Air Water Power) Worker, Miller and Havelock descend into the depths of Ceres on board a conduit elevator, surrounded by pipes that feed the lifeblood of water to the station. They find the pipe to the Southeast corner of the gardens has indeed been sabotaged with the water being diverted to a warehouse.

At the warehouse, Miller and Havelock confront young Diogo and his fellow teenage "gutter punks," who have stolen the water … and claim the Greigas have left their turf to them. Respecting their survivalist defiance (but wondering what happened to the Greigas), Miller lets them go with a warning: stay away from the owkwa.

Later, Miller visits the Docks in the hopes to find a lead on the Razorback. The Dock Master remembers Julie Mao from her teaching a rude dock-jock some manners and reveals that she was a passenger on a dumpy old transport called the Scopuli. In case you haven't put the pieces together yet, we will for you: Julie Mao left Ceres on The Scopuli. The Scopuli was the abandoned ship that Holden and The Canterbury crew picked up a distress signal from, only to find it abandoned (and for a nearby stealth ship to blow up The Canterbury).

After going through Julie's profile on a dating site, Miller finds that she went out with a guy called 'Nightbandit31'. Is he somehow connected to her disappearance … and that of the Scopuli?

Speaking of dating, Havelock's been holding on to that little cactus given to him by Joon … and gives it to Gia, the prostitute Miller questioned in Episode 1. She accepts the gift with a smile and they disappear into Gia's quarters.

Meanwhile at the UN[]

Meanwhile, at the United Nations Building in New York City on Earth, U.N. Undersecretary-General Sadavir Errinwright is enraged at Chrisjen Avasarala for gravity-torturing accused OPA operative Heikki Sabong for 20 hours. "If you want to talk to that Belter, you put him in the Tank," he seethes.

Heikki is put in 'the Tank,' a small saline-filled Plexiglass cell that alleviates the crush of Earth's gravity on Belter bodies. Speaking through a full-face breather mask, Heikki insists he's not OPA but simply a "meaningless courier." But how — and why — was he in possession of restricted stealth technology? Who entrusted him to carry pieces of the Holy Grail?

Chrisjen has Heikki Sabong sent to Luna (the station on Earth's moon) for further interrogation, believing the OPA is trying to obtain stealth weapons to form an alliance with Mars. "The Cold War is over," she tells Errinwright. "This is something new."[3]

Later that night at her Westchester home, Chrisjen is told that Heikki Sabong killed himself en route to Luna by rejecting the high-gravity injections from his crash couch. "Earth's gravity - we used it to hurt him," says the U.N. executive assistant on the phone. "He threw it back in our face."[4]

The crew discusses their options[]

Miller gets a visit from his boss, Holden nad Amos try to repair the ship[]

Time is running out[]

It's time to take charge[]

Havelock and Miller go after a street rat[]

Miller asks around, Naomi and the others wait for a response[]

Miller begins to build a psychological profile of Julie[] 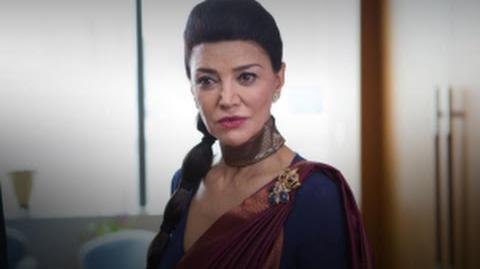 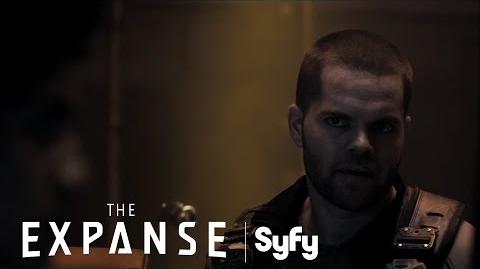 THE EXPANSE Inside The Expanse Episode 2 Syfy 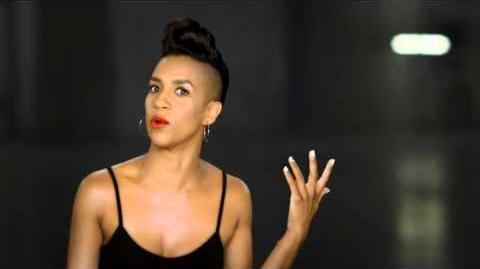 Inside The Expanse - Episode 2 THE ZONE SKY TV