The Monster and the Rocket

"The Monster and the Rocket" is the twelfth and penultimate episode of the second season of The Expanse. Overall, it is the twenty-second episode. It aired on April 12, 2017.

A discovery pushes Naomi and Holden apart and sets the Roci crew against each other.

On Earth, Undersecretary Errinwright spends time with his young son. He is seemingly haunted by the testimony he is going to have to give to the panel on Eros. As he tries to impart lessons about growing up, a sense of suicidal thoughts appears. Still, he assures his son that everything is going to be okay.

The Rocinante — with Holden, Alex, and Prax aboard — takes off from Ganymede and begins scanning for the human-protomolecule hybrid that escaped. They find it in the agricultural dome and, while Holden wants to eliminate it, Prax posits that it could be his daughter. The two men argue but, Holden does not want to hear dissent. Alex is forced to take evasive maneuvers to avoid MCRN detection, though, and they lose the signal on the hybrid.

Avasarala tries to assure Errinwright that the hearing will be okay. She also tells him about her upcoming meeting with Jules-Pierre Mao. Errinwright tells her to make him a peace offer, as it may be their only chance for the UN to remain a superpower. He believes the MCR will use the protomolecule to destroy Earth and he tells Avasarala to convince Mao of the same.

On Ganymede, Melissa, the captain of the Weeping Somnambulist, is trying to herd refugees when Naomi approaches with an offer to fix the Somnambulist. Eventually, Naomi convinces Melissa that she is needed.

Avasarala — along with Draper and Cotyar — prepares to leave for her meeting with Mao. She is nervous about traveling off-planet and Cotyar teases her. Draper is uneasy about being there in the first place and remarks that she used to use the U.N. logo for target practice. Cotyar distracts her with his misgivings about this meeting with Mao.

Having evaded detection, the Roci approaches the agricultural dome. Alex tries to maneuver the ship inside the crumbling structure and Holden tells him to keep pushing. They see the hybrid and fire upon it. They miss but, Prax is enraged. He and Holden have another argument and it is seen that Holden is crazed about eliminating the hybrid before it can do any more damage.

On Ganymede, Melissa is having trouble controlling the crowd of refugees, who try to overrun her. Amos tries to help with crowd control but, they ultimately have to shut the doors. Still bleeding, Amos requires a shot of painkiller. Melissa informs Naomi that the ship can hold 300 people but, they only have air enough for 52. There are over 100 refugees and they are all going to rush onto the ship once the doors open. Naomi attests they can take off with 100 and then send the overflow to the Roci when they rendezvous but, Melissa does not agree. She does not trust James Holden. She does not believe they can safely open the doors at all but, Naomi is adamant.

Martian Defense Minister Korshunov meets with Errinwright in his office, where they attempt to negotiate over what to do about Bobbie Draper and her defector status. Korshunov makes the case for new technology as a game changer. He notes that it could shave a century off of their terraforming efforts, if nothing else. While the meeting appeared to be civil, Korshunov suddenly drops to his knees, clearly having been poisoned by Errinwright, who monologues about a poison they discovered that only affects low-gravity physiology.

The unrest on Ganymede continues. The big muscle guy whom Melissa hired for crowd control, Champa, is turning on her and the hordes might bust down the door. On the ship, Amos tells Naomi that Melissa is right: they cannot open the doors.

While Draper and Cotyar continue to bicker, she catches on to the fact that he served in the military. They talk about his secret ops service and he says it was because of him that Avasarala's son died.

Captain Malick greets Avasarala and welcomes her to Mao's ship. It's very ornate and Avasarala makes sure to mention it. Jules-Pierre Mao soon joins them and, while he starts with small talk, Chrisjen interrupts demanding that he get to the point.

The Roci continues to search the agricultural dome for the hybrid. They are also tracking the MCRN ship Karakum when it suddenly disappears from RADAR. Alex concludes that someone must have blown it up.

On Ganymede, there are explosions outside, as something big has fallen out of orbit. Crisis and panic sets in and Melissa tells Naomi to prepare for lift-off.

J.P. Mao demands that Avasarala stop persecuting his family and unfreeze his assets. He points out his plan to keep the UN and MCR in balance, giving them both access to the protomolecule. To this Avasarala notes that what Mao truly desires is to keep himself wealthy profitting in the middle of the two superpowers' rivalry. Suddenly, they are interrupted by a tightbeam video message from Errinwright who announces both Minister Korsunov's death and the destruction of the Karakum over Ganymede. Errinwright threatens to destroy Mao where he sits but, he also turns to Avasarala, telling her he feels betrayed by her. He orders Mao to handle the situation and return to Earth alone so they can resume their partnership. Mao's people draw their guns on Avasarala, Cotyar, and Draper as Mao exits.

On the Somnambulist, Naomi wants to try talking to the refugees. Amos tries to stop her. Shooting him up with a double dose of painkillers, Naomi strides out to the doors and opens them; the hordes stream in. The muscle Melissa had hired, Champa, tries to choke Naomi out but, she tells him they need to get only 52 people on the ship or none will survive. She attests she did not do enough before she left Eros and that this is her chance to atone. He agrees to help and Champa delivers an emotional speech on the Belter's common hardship, strength, and determination. He and Naomi manage to get the Belters to put their children onto the ship first. Thereafter, they're followed by an orderly procession of the youngest adults, half of those are female and equally another half are male. Naomi offers Champa, the crowd-control guy, her place on the ship but, he pushes her aboard.

The Roci continues to maneuver inside the agricultural dome when the hybrid resurfaces. Prax wants to go make contact but, Holden once again denies his request. Alex asserts that Holden's hunting expedition is a pointless fool's errand and they must immediately rendezvous with the Somnambulist to defend their family from impending peril.

The Somnambulist gets a final no-fly warning from the MCRN Valkyrie and then the Martians fire a torpedo at the ship. A moment before the torpedo can reach its target, the Rocinante manages to intercept it. More targets are now locked on the Roci but, Holden gets on an open channel and demands that the MCRN vessels remove their target locks, or the Roci will unleash its full arsenal. Consequently, the Martians remove their target locks.

Melissa tells Naomi they did well as the Somnambulist and the Rocinante form up into positions to fly off together. Unbeknownst to the crew, the human-protomolecule hybrid was able to secretly board the Roci before its departure from Ganymede.

{Transcript Statement|Errinwright|…and I can give the same order to end your life where you breathe at the same coordinates I'm sending this message. …You'll do well to keep that thought in mind.|timestamp=32:13.513|highlight=02|speaker_wiki_link=Sadavir Errinwright (TV)}}

Champa keeps the peace despite Ganymede unrest as station shuts down 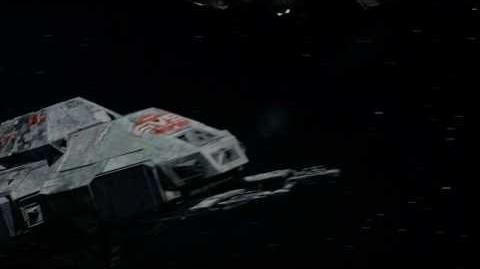 The Expanse- S02E12 The Monster and The Rocket - "Stowaway" 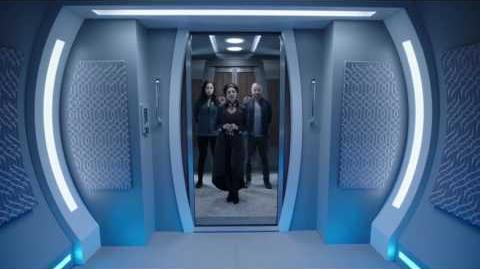 Malick aboard Mao's yacht
Add a photo to this gallery

Add a photo to this gallery

Season 2 Episode 12 - The Monster and the Rocket

Retrieved from "https://expanse.fandom.com/wiki/The_Monster_and_the_Rocket?oldid=64054"
Community content is available under CC-BY-SA unless otherwise noted.