Were you looking for the cargo ship (freighter) named the Weeping Somnambulist?

"The Weeping Somnambulist" is the ninth episode of the second season of The Expanse. Overall, it is the nineteenth episode. It aired on March 22, 2017.

Bobbie becomes a political pawn in the struggle between Earth and Mars.

The Weeping Somnambulist is a relief ship en route to Ganymede. They're suddenly boarded by a crew with space helmets on. Turns out, it's Holden and the Rocinante crew, who need to commandeer the ship so they can get onto Ganymede and search for Dr. Strickland.

Meanwhile, Bobbie Draper is on an MCR dropship bound for Earth. The Martians are told to prepare for the switch to Earth's high-gravity environment. They are required to take pills in order to withstand the stress.

The UN ship Arboghast is approaching Venus, on a fact-finding mission about Eros. On board, Colonel Janus and Dr. Iturbi verbally spar about their conflicting world-views. Janus thinks Iturbi will twist the facts to suit his beliefs in alien life. The two men are interrupted by a signal from a Martian ship.

The Roci crew is still docked with the husband-and-wife crew of the Somnambulist. Neither of whom are thrilled to see them there, though the wife, Melissa, is the angrier of the two.

Dr. Praxideke Meng records a message to Doris' family expressing his sadness over her death but his gratitude for her helping him get off Ganymede. He goes to send it, but he's not authorized. He angrily asks Amos if he's a prisoner on the ship.

On Earth, the summit has begun. Earth shades the Martians about their struggles responding to Earth's gravity. Both sides posture their way through a moment of silence for the lives lost on Ganymede.

On the Arboghast, the Martian ship is not responding to communication requests. Janus broadcasts a message that they are on a scientific mission, and if they're interfered with, any aggression could be seen as an act of war.

After getting tipped off by Amos, Prax demands answers about the protomolecule. Holden tells him enough, then Prax says that his daughter, Mei, has a genetic disorder, one Dr. Strickland was helping her with.

Reluctantly wearing her Purple Heart, Draper testifies before the panel. As instructed, she lies and says she and her team mistook an Earther training exercise for aggression and fired first. One of the Martian delegates on the panel offers up the late Private Travis as a scapegoat, and Draper goes along with it. Avasarala, however, is eyeballing Draper the whole time.

Afterwards, Draper is angry about throwing Travis under the bus, but Martens tells her that Travis, in death, may have averted a war by taking responsibility.

On Earth, the Secretary-General tells Avasarala and Errinwright that Mars is offering reparations for Ganymede as part of a settlement. While he instructs Errinwright to "squeeze those arrogant Dusters for everything you [he] can get," Avasarala remains skeptical of Draper's story, believing that Travis is too convenient of a scapegoat for initiating the incident.

With Alex staying behind on the Rocinante, Holden, Naomi, Amos, and Prax crew the Somnambulist.

Just as the UN/MCR hearings are about to close, Avasarala demands that she question Draper again. She meanders in her questioning a bit, with the intent of making Draper feel guilty for incriminating Travis. She gets Draper off guard, and Draper eventually mentions seeing the figure who wasn't wearing a vacuum suit. Martens interrupts, earning him an epic clap-back from Avasarala, but the interruption gets Draper to revert to her story.

On the Arboghast, the Martian ship appears to be shadowing them. Janus and Iturbi resume their argument about the possibility of alien civilizations, but they're interrupted by visuals of the Eros impact crater on Venus.

Later, Iturbi communicates to Avasarala that they're seeing biological compounds in the atmosphere on Venus above the Eros crater that should be impossible.

While Alex parks the Roci behind a moon to observe Ganymede, the Somnambulist lands among MCRN patrols. The ship is boarded by some opportunistic dock workers who want to take their usual cut from the Somnambulist haul. Only this time, they want everything, including the ship. There's a tense stand-off, with the pirates holding a gun to Santichai and Melissa's heads.

Holden and Amos burst out of hiding, and there's a gunfight that leaves the pirates dead, but also Santichai. Melissa is inconsolable, devastated. She orders Holden and his crew to get off her ship, and heavy with the weight of guilt, they do. 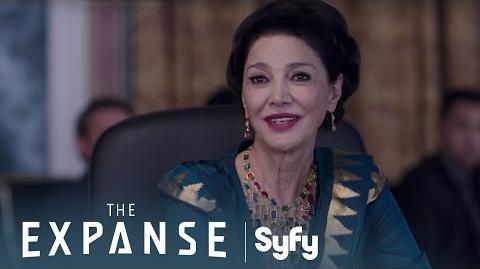 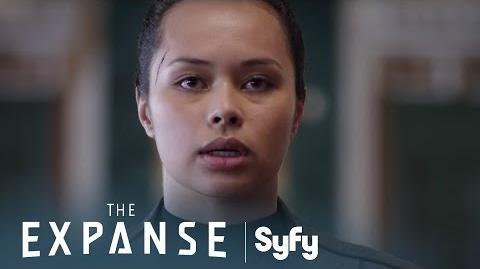 THE EXPANSE Inside Season 2 Episode 9 Syfy 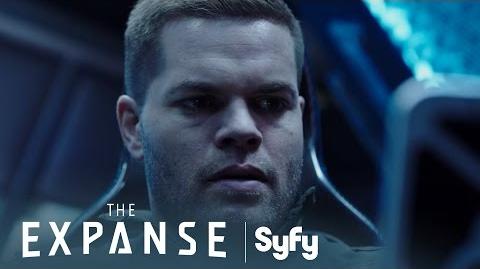 THE EXPANSE Alex VS Amos Syfy