Thoth Station was a private spin station located in the Belt. It was used for research on the protomolecule by Protogen Corporation.

The corridors of Thoth Station were wide and roomy, with carpeted floors, long swaths of ivy grown in carefully tended spirals, and lit bonsai trees every few feet. The lighting was soft and white like sunlight.

Thoth was a shadowy research and development lab owned by Protogen, and it was where they covertly carried out research on the protomolecule and where Antony Dresden orchestrated the Eros incident. As Holden, his crew, and Joe Miller escaped Eros aboard Rocinante, Holden's pilot Alex Kamal caught an outgoing signal from Dresden's ship as it also escaped, giving them Thoth Station's location. Fred Johnson, head of the OPA, then ordered an assault on the station to get to the bottom of whatever was happening to Eros.

The station was designed to evade detection, but there was a habitat ring, which implied, that there were people living there. The corridors and rooms were dark, with light coming from the scientists' terminals.

The OPA's Guy Molinari, a repurposed cargo ship converted to an assault ship, and the Rocinante approached the station with a careful plan of attack. Rocinante had been attached to the Molinari's tail end to hide it in the larger ship's radar signature, just in case the station had any surprises. As the Molinari came closer, Rocinante was detached and left to drift to the side, appearing as simple a piece of jettisoned cargo.

As it turned out, the precaution was not in vain, for the station was being guarded by the Osiris, Protogen's last functional Amun-ra-class stealth frigate. Emerging from behind the station, Osiris fired two torpedos at the Guy Molinari. However, it had not seen Rocinante, and Holden's frigate jumped into action. Shooting down both torpedoes, Rocinante moved to engage the stealth ship with PDCS. While the two other ships battled, Molinari launched two breaching pods full of OPA mercenaries, along with Miller, towards the station.

At first, the larger and more advanced Osiris got the upper hand, disabling one of Rocinante's portside thrusters and driving her into cover behind the station. When the station's "dumb gun", a cannon designed to protect the facility from debris and moving asteroids, threatened the breaching pods, Rocinante came out to try and take out the cannon. Osiris put a rail gun round into the frigate at close range, doing little damage but driving her back. The station's cannon destroyed one of the breaching pods and set its sights on the other, but Amos Burton repaired Roci's damaged thruster and the frigate swung up and over the station's habitat ring, destroying the cannon and proceeded to dance circles around the Osiris, riddling it end to end with PDC fire until it lost power and was left adrift. The remaining breaching pod attached and Miller's group assaulted the station. 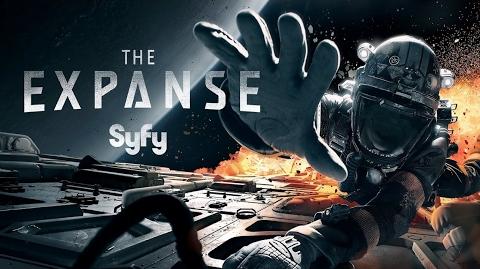 The Expanse - Assault On Spin Station 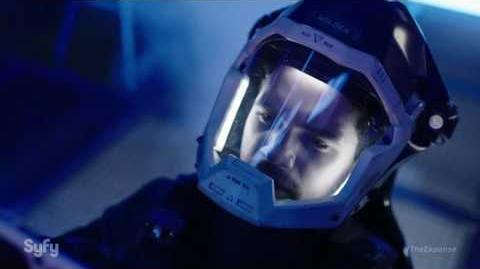 The Expanse Scene - Best Space battle I ever seen

Retrieved from "https://expanse.fandom.com/wiki/Thoth_Station?oldid=57706"
Community content is available under CC-BY-SA unless otherwise noted.