The Expanse Wiki
Register
Don't have an account?
Sign In
Advertisement
in: Battleship classes, UNN ship classes, Spaceships,
and 3 more

The Truman-class dreadnought is a battleship class in the United Nations Navy (UNN) that primarily serves as a flagship of UNN battlegroups.

Standing at only 376 meters in length and not as sleek nor as sophisticated as her Martian counterpart, the Donnager-class, the Truman-class makes up for its lost advantage in numerous manners. Famed for its sturdiness, and reliability, it is one of the longest-serving vessels in the history of the UNN, having protected Earth's interests across the system for decades.

The Truman-class dreadnought is armed with 2 Farren-Pattern high-yield heavy railgun turrets, that are able to inflict lethal damage over vast distances and are some of the most powerful and accurate weapons systems available to the UNN. Matched only by the highly advanced Martian Congressional Republic Navy (MCRN) railguns and the UNN Orbital Railgun Platforms, the Truman's railguns are able to strike a target almost instantaneously when fired from within 1000 kilometers, launching an unguided tungsten projectile that will effortlessly perforate the full mass of the targeted craft, tearing through multiple decks and often striking a critical subsystem to neutralize the target vessel in a single shot. These weapons are supported by 42 Redfield Ballistics 40mm Point Defense Cannons (PDCs)[2], spread across the surface of the dreadnought for maximum defensive coverage, as well as 9 autoloading torpedo tubes compatible with a variety of warheads. The effective targeting range of the Truman-class is shorter than that of most MCRN warships but its extensive PDC grid enables it to endure even the largest torpedo volleys, protecting the ship from harm while coordinating fleet movements or bringing her railguns to bear. Unlike the style of Martian warships, the PDCs of the Truman-class dreadnoughts don't seem to be retractable in the vessel's hull itself. This would make its PDCs have faster reaction time in some situations, however it does put its PDCs at risk of impact damage.

Vessels of the Truman-class employ a cluster of six S-400 Epstein Drives that work collectively to accelerate or brake the enormous vessels' mass with great efficiency. Vessels of this class are seen to have an impressive acceleration, with the Tripoli and Montenegro being able to catch up or keep up with light and fast Belter ships in an intense chase.

A pair of hangar bays and accompanying external docking clamps are located in the midsection of the Truman-class, where its complement of 6 L-Type UNN dropship skiffs, as well as a smaller number of short-range repair skiffs and reconnaissance drones are housed. Though the Truman-class is not quite large enough to carry corvettes, destroyers, or even frigates in its internal hangars like the MCRN Donnager-class battleships, its embarked dropships widen its mission profile to include Marine transport and deployment and surface reconnaissance.

The class shows it's age in several ways, such as naked pipes and wires above corridors and constant electrical issues. The circular CIC (Combat Information Centre) of the class is however perhaps the most notable example of the ships age, as it makes use of computers operated with keyboards, switches and sticks rather than touchscreens and holographic interfaces as seen aboard MCRN ships and other more modern ships. However, many may have been upgraded to include touchscreen and holographic interfaces as such with the UNN Thomas Prince.

Perhaps one of its most valuable traits, its versatility, an attribute that has stood the test of time, surely is the "crown jewel" of the ship. Few vessels are able to serve as both a battleship and a troop transport without sacrificing effectiveness in both areas, but the streamlined design of the Truman-class allows the vessel to singlehandedly carry out missions that would otherwise require a small flotilla. This high level of adaptability has earned the Truman-class its impressive reputation, and serves as an enduring reminder that technological sophistication is often no substitute for a simple and reliable design.

The Truman-class dreadnought contains many various facilities within for a warship this size. Some of them include:

At the time of the war between Earth and Mars that broke out following the Ganymede Incident, the Truman-class dreadnought was one of the longest-serving vessels in the history of the UNN, having been protecting Earth's interests across the system for decades and serving as the immovable center of UNN battlegroups. The UNN Agatha King (T-DRN-32) served as the flagship of the UNN's Jupiter Fleet under the command of Admiral Souther until he was relieved of command by Fleet Admiral Augusto Nguyễn who ordered the dreadnought for Io to retrieve Jules-Pierre Mao's Protomolecule hybrids.

When several UNN warships refused to obey Nguyễn's orders following a failed mutiny initiated by Souther against Nguyễn for waging an illegal war, the Fleet Admiral declared them deserters and destroyed one of the ships, the Jimenez, with a torpedo from the Agatha King which prompted other UNN ships loyal to Souther to fire on the Agatha King in retaliation. However, their torpedoes were shot down by the Agatha King's PDCs and the UNN dreadnought proceeded to destroy several more UNN warships in retribution. The Agatha King was later hulled by a hybrid pod that was hit by PDC fire from the MCRN Hammurabi over Io after Nguyễn initiated a mass launch from the moon's surface targeting Mars and the UNN dreadnought and her crew subsequently became infected by the Protomolecule. The Agatha King was later scuttled after an infected Cotyar Ghazi intentionally destabilized the ship's reactor.

Several months later, the Truman-class dreadnought UNN Thomas Prince (T-DRN-47) carried various religious clergy and artists including Annushka Volovodov into the Ring. The Thomas Prince was one of the ships in the Slow Zone to be suddenly stopped by the Ring Station, leading to serious casualties at the start of the Slow Zone Incident with Commander Kunis assuming command as the highest-ranking officer amongst the surviving crew. After the crew of the Rocinante broadcast that all of the ships in the flotilla needed to shut down their fusion reactors to convince the Ring Station that humanity was not a threat and release their ships, the Thomas Prince was the first ship to do so under Kunis's orders at the insistence of Dr. Kolvoord. Afterwards the Thomas Prince returned to Earth's solar system through the Ring alongside the rest of the flotilla.

Following these events, the UNN Tripoli and UNN Montenegro were deployed to blockade the Sol Ring alongside other UNN and MCRN vessels to prevent unauthorized access to the Ring space and engaged a group Belter refugee ships when they attempted to run the blockade however several of the ships broke through the blockage and the Tripoli and the "Montenegro" gave chase with the Tripoli subsequently destroying one Belter ship and damaging the Barbapiccola with its PDCs when the vessels ignored orders to stop and accelerated towards the Ilus Ring. The Tripoli subsequently remained on station to guard the Sol Ring other next several months until a loss of communication with the Rocinante and RCE Edward Israel at Ilus coupled with recent attacks on Earther colony ships by Marco Inaros that the OPA failed to handle to the UN's liking prompted the UNN to deploy the Tripoli into the Ring space itself, causing tension with the OPA (Outer Planets Alliance).

The UNN dreadnoughts Tripoli and Montenegro were tasked with the defence of the Sol ring alongside the MCRN Sagarmatha as part of the EMC Sol gate fleet.

During the Battle for the Sol gate, all three ships suffered serious damage from a precision micro-meteor strike. These micro-meteors were covered in Martian Stealth composites. The UNN vessels were later destroyed under an overwhelming and unexpected volley of torpedoes fired from rogue MCR ships approaching the Ring from the vessel's flank. The Montenegro and Tripoli can be assumed lost with all hands, as the Sagarmatha.

During the Free Navy Conflict, numerous reffited and upgraded Trumans' identical to the UNN Tripoli were present orbitting Earth.

The various decks of a Truman-class 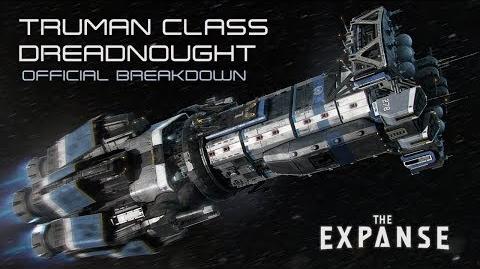